Eager to attack a potential new Trump administration policy dealing with sexual assault on college campuses, on Thursday, NBC’s Today show actually ignored its own reporting on the litany of problems with existing Obama-era policy. Instead, the story feared that Trump’s Department of Education was getting ready to silence sexual assault victims.

“Also this morning, could the rules on how universities handle sexual assault and harassment cases be about to change and give more rights to the accused?,” warned co-host Savannah Guthrie while introducing the segment. Correspondent Kate Snow fretted: “Proposed rules by Education Secretary Betsy DeVos, obtained by The New York Times, could strengthen protections for students accused of sexual misconduct and reduce the potential liability of schools.”

Snow admitted that the supposed new rules were “not independently verified by NBC News” but listed them anyway:

The rules...would reportedly allow schools investigating misconduct to require more proof, potentially making it more difficult to find accused students guilty. They would also narrow the definition of sexual harassment, limiting it to the most severe acts. Schools would only be held accountable for formal complaints and conduct that happened on campus.

Even after noting the Education Department calling the Times report “premature and speculative,” Snow sounded the alarm: “With the growing #MeToo movement empowering victims of sexual misconduct to step forward, some worry this will push them back into the shadows.”

Snow briefly highlighted Secretary DeVos pointing out that “Obama-era rules stacks the odds against the accused and put an unfair burden on schools.” However, moments later, the reporter turned to Obama Education Secretary Arne Duncan to condemn the possible move as “a step backward”: “Any attempt by the current administration to roll back protections for those who are victims of sexual assault on campus, honestly, is a little mind boggling to me. I just can’t understand it.”

It hasn’t just been the Trump administration and Betsy DeVos calling for a correction to the Obama administration’s approach to combating college sexual assault. In October of 2016, less than two years ago, then-NBC News journalist Ronan Farrow appeared on the Today show to examine the Obama Education Department’s efforts to address the issue and found serious cases of injustice to both victims and those who were falsely accused.

“Under pressure from the Department of Education Office for Civil Rights, schools across the country have thrown due process out the window,” declared Harvard Law Professor Janet Halley. Sherry Warner-Seefeld, the mother of falsely accused University of North Dakota student Caleb Warner, described her son being subjected to “a joke of a hearing” before quickly being found guilty and expelled.

Farrow informed viewers: “After the police investigated they charged his accuser with filing a false report and issued a warrant for her arrest. Despite that, the school refused to overturn their decision, for more than a year.”

None of that coverage from her own network was included in Snow’s hit piece against the Trump administration on Thursday. In fact, the one-sided report was re-aired in the 9 a.m. ET hour on Megyn Kelly Today. However, unlike Snow, anchor Megyn Kelly proceeded to give a point-by-point takedown of the misguided Obama administration that others were trying to fix:

Can I tell you, I've been covering this closely for years, for years....I would submit that the Obama administration overcorrected the problem and swung the pendulum too far back against the accused, completely eroding their due process rights.

And I’ll give you an example that you will not hear probably elsewhere in the media today. I had a guy on my old show by the name of Grant Neal. He went to Colorado State. Great football player, aspiring orthopedic surgeon, had a 3.7 GPA. He had a sexual relationship with a woman. She asked if he was using protection, he said no. For a couple of seconds there it went on, they resolved the problem. They had a great night. They had another great night a couple nights later. All was great.

She told her roommate about the situation. The roommate said those five seconds were a rape. The girl said, “I haven’t been raped, Grant is not a rapist” The roommate goes and reports it to the campus authorities. Grant gets pulled in as an accused rapist. The victim is saying, “He didn’t rape me.” The school finds him guilty, he gets suspended and cannot come back to school until the victim, the alleged victim, graduates. His career was ruined. His college campus experience was ruined. His football – all of it. Done. How is that fair?

Like Farrow did in 2016, Kelly also cited the case of Caleb Warner. She concluded:

On a related topic, in May, NBC News put out a laughable report on its handling of the Matt Lauer sexual harassment scandal, clearing themselves of any wrongdoing despite overlooking years of misconduct by the disgraced former Today show anchor.

Perhaps NBC should focus on reforming its own policies before it attacks the Trump administration for considering reforms.

Here is a full transcript of Snow’s August 30 report on the Today show:

SAVANNAH GUTHRIE: Also this morning, could the rules on how universities handle sexual assault and harassment cases be about to change and give more rights to the accused? NBC’s Senior National Correspondent Kate Snow is following that for us this morning. Hi, Kate, good morning.

KATE SNOW: Hi Savannah and Craig, good morning. Proposed rules by Education Secretary Betsy DeVos, obtained by The New York Times, could strengthen protections for students accused of sexual misconduct and reduce the potential liability of schools. It comes, of course, at a time when a number of major universities are dealing with serious abuse allegations. 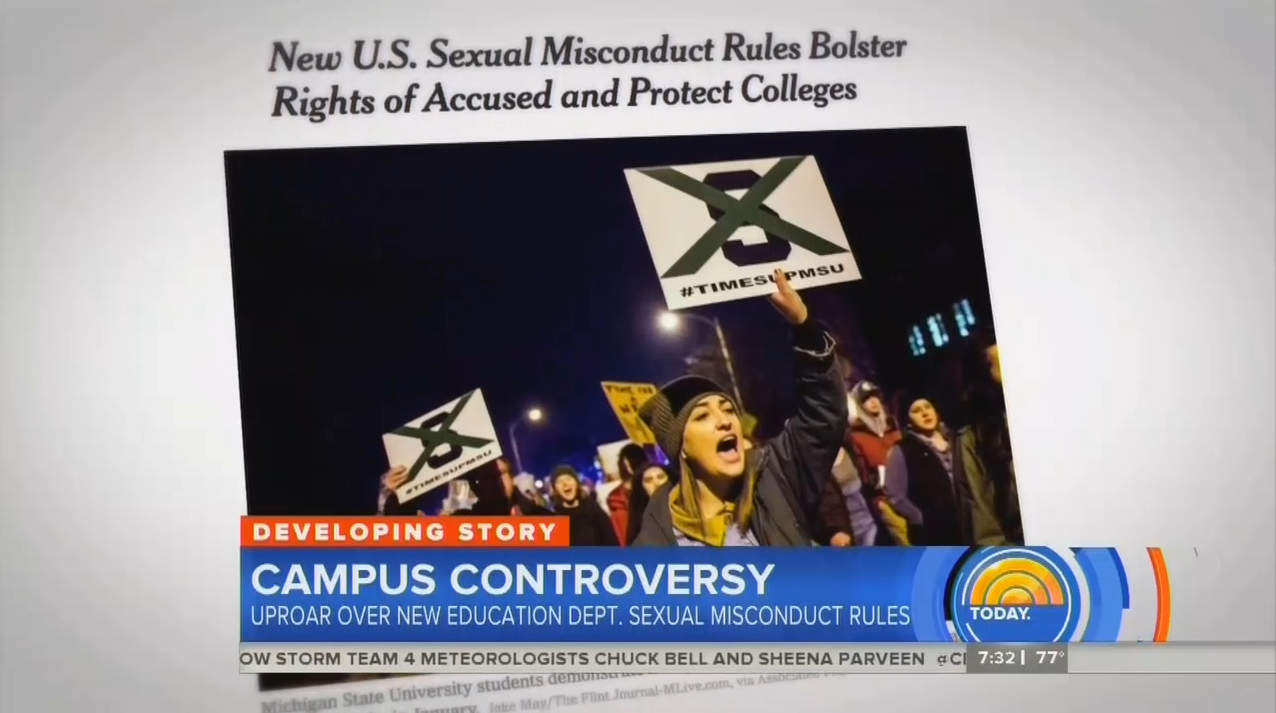 With the new school year comes the possibility of new rules. A report overnight from The New York Times revealing Education Secretary Betsy DeVos is proposing new policies aimed at dealing with sexual misconduct on campus.

The rules, obtained by the Times but not independently verified by NBC News, would reportedly allow schools investigating misconduct to require more proof, potentially making it more difficult to find accused students guilty. They would also narrow the definition of sexual harassment, limiting it to the most severe acts. Schools would only be held accountable for formal complaints and conduct that happened on campus.

In a statement to NBC News, the Department of Education says, “We are in the midst of a deliberative process,” calling any information in the Times report, “premature and speculative.”

PROTESTERS [CHANTING]: Sexual violence has got to go!

SNOW: With the growing #MeToo movement empowering victims of sexual misconduct to step forward, some worry this will push them back into the shadows.

JESS DAVIDSON [EXECUTIVE DIRECTOR OF ‘END RAPE ON CAMPUS’]: I think that these policies, if this is what the regulation turns out to be, will absolutely prevent survivors from coming forward.

SNOW: The move comes a year after Secretary DeVos first announced plans to overhaul the Obama administration’s 2011 guidance for schools, saying it “failed too many students.” DeVos and others argued the Obama-era rules stacks the odds against the accused and put an unfair burden on schools.

BETSY DEVOS [SECRETARY OF EDUCATION, SEPT. 2017]: Survivors, victims of a lack of due process, and campus administrators have all told me that the current approach does a disservice to everyone involved.

SNOW: The president of the National Coalition for Men voiced support for the administration’s approach, saying, “We’re very hopeful that their resulting modifications will be fair to everybody.”

ARNE DUNCAN [FORMER SECRETARY OF EDUCATION]: Any attempt by the current administration to roll back protections for those who are victims of sexual assault on campus, honestly, is a little mind boggling to me. I just can’t understand it.

SNOW: The possible changes come as major universities deal with explosive scandals. Two women who say they were victims of sexual misconduct by fellow students at Texas A&M told Today back in June their university wasn’t doing enough.

UNIDENTIFIED WOMAN: I was more hurt by the way A&M treated me.

SNOW: At the time, the university responded, saying, “We care deeply about our students and are committed to a safe, secure environment.” The school recently outlined new actions its taking to deal with the issue.

Now these proposed rules cover all levels of education, from colleges all the way down to elementary schools, where, for example, a teacher might be accused of misconduct. There will reportedly be a public comment period, and again, the Department of Education says, guys, that the proposed rules are still a work in progress.

GUTHRIE: The timing is interesting. I mean, kids are going back to school right now.

KATE SNOW: Yeah, it’s fall. And actually, if you look at sexual assaults, they actually rise in the summer and fall. As a study back in 2007 found, more than 50% of assaults happen between August and November. So this is the time to be looking at the issue.

GUTHRIE: We’ll see where it all shakes out. Kate, thank you very much.