On Monday, ABC’s Good Morning America was the only network morning show to refuse to cover Monica Lewinsky accusing former President Bill Clinton of a “gross abuse of power” for having an affair with her when she was a White House intern. Perhaps the glaring omission had something to do with anchor George Stephanopoulos being a former Clinton operative.

NBC’s Today show provided the most coverage of Lewinsky’s latest remarks on the scandal in an article for Vanity Fair. During a full report for the morning show, correspondent Kate Snow informed viewers: “In a lengthy, almost academic piece, Monica Lewinsky reinterprets all she’s been through.... She says she now associates her affair with President Clinton with the gross abuses of power making headlines today.”

Lewinsky hopeful some in the country will now view what happened to her through a different lens, acknowledging, “Some people feel my White House experiences don’t have a place in this movement, as what transpired between Bill Clinton and myself was not sexual assault, although we now recognize that it constituted a gross abuse of power.”

CBS This Morning only offered a news brief on the topic, but co-host Norah O’Donnell highlighted Lewinsky’s key quote:

Lewinsky says their relationship was a, quote, “gross abuse of power.” She writes about her experience, saying, “By and large, I had been alone, so very alone. Abandoned most of all by the key figure in the crisis, who actually knew me well and intimately. I don’t believe I would have felt so isolated had it all happened today.” Lewinsky praised the brave women speaking up about sexual inequality in light of the Me Too movement.

While GMA completely ignored the Lewinsky story, ABC News was aware of the Vanity Fair article. During the network’s 4:00 a.m. broadcast of America This Morning, co-host Diane Macedo told the show’s limited audience:

Monica Lewinsky is speaking out this morning, crediting the Me Too movement for shedding new light on the relationship we had – she had, rather – with former President Bill Clinton. Lewinsky says she realizes she’s not alone anymore. In a new essay in Vanity Fair, she says she now realizes the affair was a “gross abuse of power” by the President. She says, quote, “Given my PTSD and my understanding of trauma, it’s very likely that my thinking would not necessarily be changing had it not been for the #MeToo movement.”

So why exactly did that report not make the cut for GMA three hours later, when many more people were watching?

Here is a full transcript of the February 26 report on the Today show:

SAVANNAH GUTHRIE: We’re back, 7:41. A new voice weighing in on the Me Too movement.

HODA KOTB: Monica Lewinsky is using its power and impact to reflect on her relationship with then-President Bill Clinton. NBC’s Senior National Correspondent Kate Snow is here with what she’s saying. Hey, Kate.

KATE SNOW: In a lengthy, almost academic piece, Monica Lewinsky reinterprets all she’s been through, saying, “You cannot run away from who you are or from how you’ve been shaped by your experiences.” She says she now associates her affair with President Clinton with the gross abuses of power making headlines today. 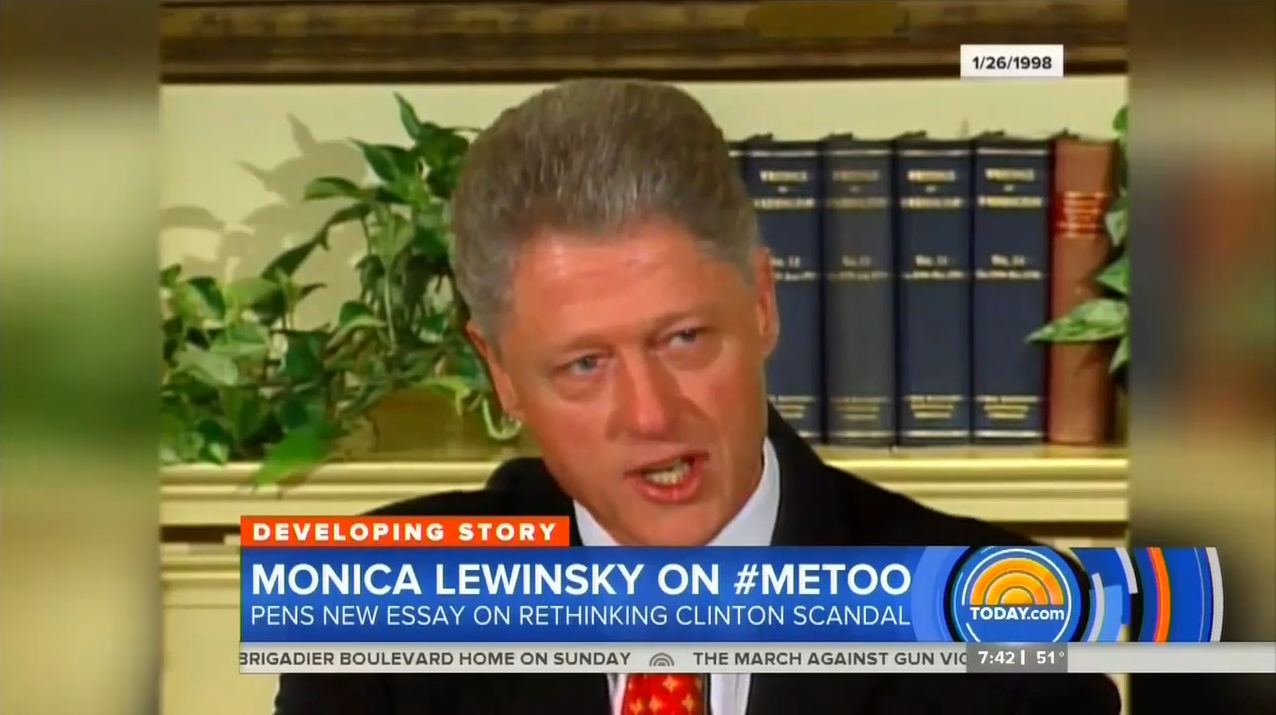 SNOW: This morning, the most famous White House intern ever is saying, “Me too.” Monica Lewinsky opening up and getting personal in an essay she wrote for Vanity Fair. Lewinsky, who admitted to an affair with then-President Bill Clinton in 1998, saying she suffers from PTSD. Writing, “For two decades, I’ve been working on myself, my trauma, and my healing.” She now says because of the Me Too and Time’s Up movements, she no longer feels alone.

Lewinsky hopeful some in the country will now view what happened to her through a different lens, acknowledging, “Some people feel my White House experiences don’t have a place in this movement, as what transpired between Bill Clinton and myself was not sexual assault, although we now recognize that it constituted a gross abuse of power.”

BILL CLINTON [01/26/98]: I did not have sexual relations with that woman, Miss Lewinsky.

SNOW: Lewinsky was just 24 years old when she became a household name for the sexual relationship with Clinton that helped lead to his impeachment and eventual acquittal in the U.S. Senate.

MONICA LEWINSKY: I was patient zero of losing a personal reputation on a global scale almost instantaneously. News sources plastered photos of me all over to sell newspapers, banner ads online, and to keep people tuned to the TV.

SNOW: In a previous essay for Vanity Fair, Lewinsky wrote, “Sure, my boss took advantage of me, but I will always remain firm on this point: It was a consensual relationship. Any ‘abuse’ came in the aftermath when I was made a scapegoat in order to protect his powerful position.”

She now writes, “I now see how problematic it was that the two of us even got to a place where there was a question of consent.” Continuing, “Instead, the road that led there was littered with inappropriate abuse of authority, station, and privilege.” Adding, “He was my boss. He was the most powerful man on the planet. He was 27 years my senior, with enough life experience to know better. He was, at the time, at the pinnacle of his career, while I was in my first job out of college. (Note to the trolls, both Democratic and Republicans: None of the above excuses me from my responsibility for what happened. I meet regret every day.)”

Now at 44, Lewinsky saying she’s grateful to all those speaking up about sexual assault and harassment. Lewinsky ending her piece with the words, “They tried to bury us; They didn’t know we were seeds. Spring has finally sprung.”

Lewinsky also addresses the financial strain that hits many women affected by the Me Too movement, women who come forward. She says it’s often just the privileged who can afford legal and therapy costs that come with speaking out. And she hopes that that, in time, will change. Guys?