Echoing the slanted coverage of ABC and CBS, on Friday, NBC’s Today show closed out its two-week coverage of the winter Olympics by gushing over openly gay Olympians Adam Rippon and Gus Kenworthy using their fame to “stand up as advocates” and “voicing their disapproval when Vice President Mike pence was picked to lead the U.S. Olympic delegation.”

“Figure skater Adam Rippon and freestyle skier Gus Kenworthy made history here just by being themselves,” co-host Savannah Guthrie proclaimed at the top of the segment. Noting all the sponsors Kenworthy had accumulated since coming out in 2015, correspondent Craig Melvin cheered:

The support reflecting a broader cultural shift that has not only allowed these talented athletes to come out, but also stand up as advocates. Even voicing their disapproval when Vice President Mike pence was picked to lead the U.S. Olympic delegation.

Rippon repeated his well-publicized denunciations of Pence: “I feel that Mike Pence doesn’t stand for anything that I was taught when I grew up, and I think that it’s important if you’re given the platform to speak up for those who don’t have a voice.”

Melvin clarified: “But to be clear, you did just say that if the Vice President were to call now, you would take the phone call?” The skater agreed: “Totally.”

Before the games, Rippon told USA Today that Pence had no “real concept of reality” and should “should really go to church” to repent for being part of the Trump administration.

For his part, Kenworthy has said that he would not meet with Pence and would refuse to attend a traditional White House event after the Olympics.

Here is a full transcript of the February 23 report:

HODA KOTB: And welcome back to Pyeongchang on our final morning here at the winter Olympic games.

SAVANNAH GUTHRIE: That’s right. Figure skater Adam Rippon and freestyle skier Gus Kenworthy made history here just by being themselves. And Today’s Craig Melvin caught up with them to talk about their experience at the Olympics.

CRAIG MELVIN: You’re the first openly gay American athlete to win a medal at the Olympic games. How does that make you feel?

[ON-SCREEN HEADLINE: Out at the Olympics; Adam Rippon & Gus Kenworthy Share Their Journey]

ADAM RIPPON: Great. I mean, you know, I came here being authentically myself and sharing my story and being gay is part of that. But I came here as an American athlete. And I came here to help my team get a medal in that team event, and that was what I focused on.

UNIDENTIFIED MAN [OLYMPIC ANNOUNCER]: Will we see the triple from Kenworthy? He wants it!

MELVIN: Freestyle skier Gus Kenworthy could have claimed that first back in Sochi, when he took home the silver in Men’s Slope Style, but he wasn’t ready – yet.

GUS KENWORTHY: I was very much in the closet and very much ashamed of who I was and I actually didn’t get to appreciate the medal that I won because of that. I didn’t know if, like, the gay skier would be an image that anyone wanted to get behind and wanted to support.

MELVIN: But when Kenworthy came out in 2015, sponsors didn’t just stick with the skier, they grew exponentially.

KENWORTHY: I signed the most Olympic deals of any athlete coming to the winter games, which is crazy. 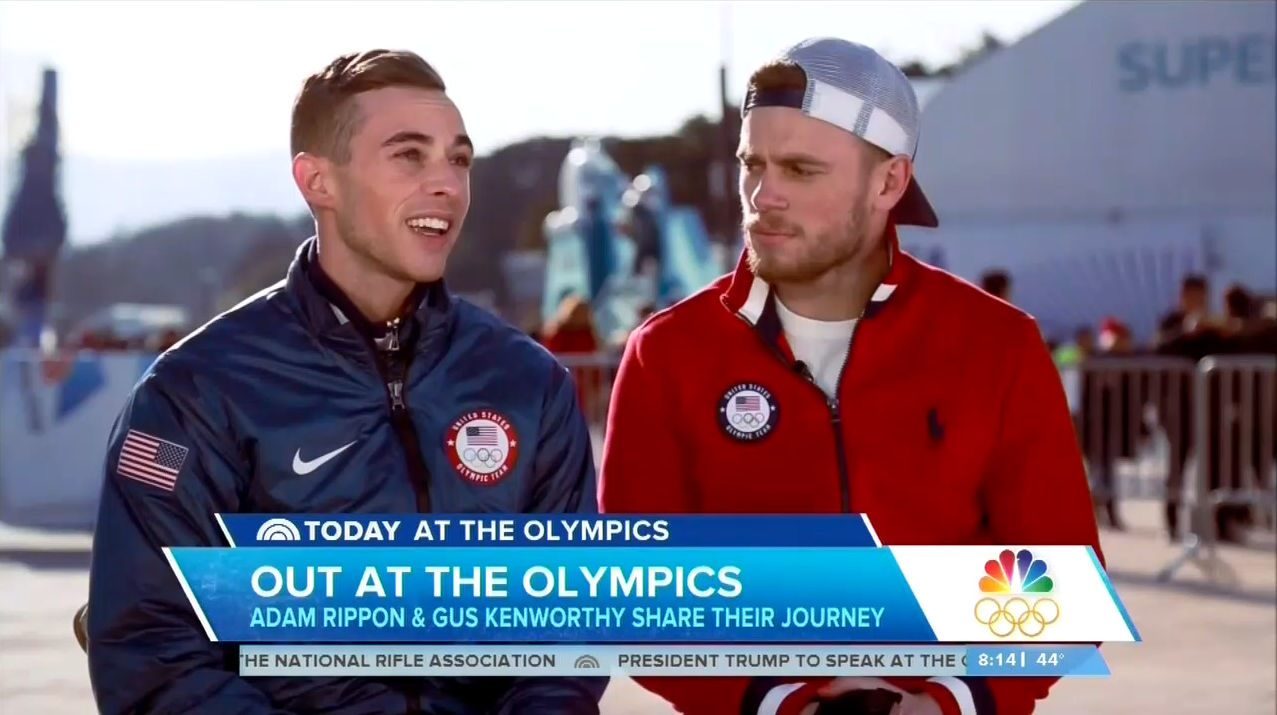 MELVIN: The support reflecting a broader cultural shift that has not only allowed these talented athletes to come out, but also stand up as advocates. Even voicing their disapproval when Vice President Mike pence was picked to lead the U.S. Olympic delegation.

RIPPON: I feel that Mike Pence doesn’t stand for anything that I was taught when I grew up, and I think that it’s important if you’re given the platform to speak up for those who don’t have a voice. And, you know, I was offered a phone call with the Vice President that I decided not to take before the games.

MELVIN: Why? Why wouldn’t you at least talk to the Vice President?

RIPPON: You know, I didn’t take the phone call, because I needed to focus on the competition.

MELVIN: But to be clear, you did just say that if the Vice President were to call now, you would take the phone call?

MELVIN: Have we all made too much of this?

RIPPON: I think there’s a lot being made of it because people still, on some level, have a problem.

KENWORTHY: My boyfriend and I had a kiss at the bottom of the contest and people were like, “We get it. We don't freed to see it, though.” Like, “I don’t care what you do behind closed doors, but don’t put it in my face.” And it’s kind of like, well, my entire life – in movies, in commercials, in public everywhere – you see straight, heterosexual love and that’s completely fine because it’s normal, but us also showing the same type of affection isn’t shoving it in your face, it’s just us existing.

MELVIN: When you saw that kiss, were you surprised at all?

KENWORTHY: He was jealous.

KENWORTHY: He was mostly jealous.

MELVIN: Why don’t you think that there have been more winter Olympians who have come out?

KENWORTHY: Oh, my God, do you want to hear names? I’m just kidding.

MELVIN: Not that interview.

KENWORTHY: No, I know. There are definitely other athletes before us and other athletes currently and other athletes that will be after us that are gay. Hopefully people will see the reaction that we got. Because I feel we were so supported during this games, and had so much love and encouragement, that it will provide people the solace they need to want to come forward themselves.

GUTHRIE: And that was Craig Melvin sitting down with two athletes we came to get to know during this Olympics.

KOTB: Yeah, got to spend a lot of time with, loved them both.