In an unhinged rant at the top of his 3:00 p.m. ET hour show on Friday, MSNBC anchor Ali Velshi blasted President Trump for taking questions from “two very friendly outlets” during a joint press conference with Australian Prime Minister Malcolm Turnbull in the previous hour. The host went on to call Trump “cowardly” and claim that the President “cheated” by not calling on supposed “legitimate news sources.”

As Velshi began his tirade, even fellow anchor Katy Tur tried to reign him in, pointing out that Trump “still got tough questions, let’s be clear about that.”  However, her colleague wasn’t about to listen to reason: “But they were friendly outfits....The President took the easy way out today. It was cowardly to not to take questions from legitimate news sources today.”

As is tradition in such joint press conferences with foreign leaders, the President called on two American reporters and the Prime Minister called on two Australian reporters, who focused exclusively on foreign policy. The first American reporter Trump turned to was Trey Yingst from One America News. The second American journalist the President selected was Gabby Morrongiello of The Washington Examiner. Here were their questions to Trump:

TREY YINGST [CHIEF WHITE HOUSE CORRESPONDENT, ONE AMERICA NEWS]: Following mass shootings, there’s often a lot of talk and little action. So I ask you today, what specific pieces of legislation or legislative framework will you propose to lawmakers following the Parkland shooting?

YINGST: If I could follow up, Mr. President. Amid talks of arming teachers and mental health, what specific commitments to American students can you make that these policies will them safer?

GABBY MORRONGIELLO [WHITE HOUSE REPORTER, THE WASHINGTON EXAMINER]: Your Chief of Staff, General Kelly, has recommended ending the practice of granting interim security clearances to members of the Trump administration. If that proceeds, would you be willing to grant a waiver to Jared Kushner, one of your senior advisers?

Velshi rejected the content of the challenging questions to the President: “The fact that it was a hard question is secondary to the fact that the President, on a day he had to be held accountable, the very basis of our accountability in society, the President cheated.”

This was not the first diatribe Velshi unleashed against the President on Friday. Immediately following Trump’s address to the Conservative Political Action Conference, during the 11:00 a.m. ET hour, the anchor accused the commander-in-chief of “lying” and compared the speech to ones given by brutal dictators in Venezuela, Cuba, and Iran.

He lamented to Tur: “This is an alternate reality in which we live.”

That’s definitely an accurate description of what’s going on at MSNBC these days.

Here is a full transcript of Velshi’s February 23 rant:

KATY TUR: But just to remind everybody, before I hand it over to Ali Velshi, 19 indictments or pleas so far, five guilty pleas, and four cooperators. Here is who has pled guilty in the Mueller probe so far. Rick Gates, as we just saw. George Papadapoulos, Michael Flynn, Richard “Ricky” Pinedo, and Alex Van Der Zwaan, which happened just the other day. Ali Velshi, things are heating up. 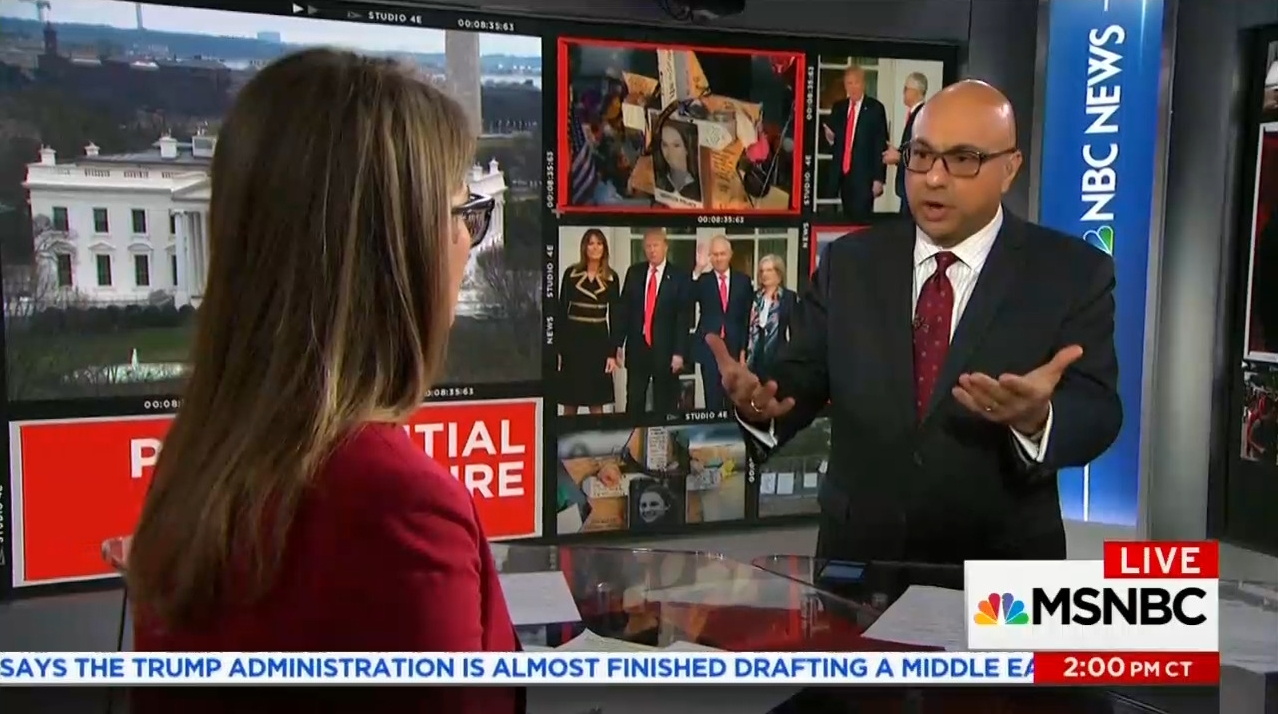 ALI VELSHI: Yeah, and interestingly enough, in the news conference, typically speaking, if something like this happened and the President had reporters in front of him, you know, he chose two very friendly outlets from which to take questions.

TUR: He still got tough questions, let’s be clear about that.

VELSHI: But they were friendly outfits. The first one of which, One America News, peddles in conspiracy theories. In fact, was doing so this week. I think Americans have to understand that something is wrong at the White House, where there are groups that get credentials like them, with conspiracy theories.

The President took the easy way out today. It was cowardly to not to take questions from legitimate news sources today. The fact that it was a hard question is secondary to the fact that the President, on a day he had to be held accountable, the very basis of our accountability in society, the President cheated.

TUR: he did not answer questions from reporters in the Oval Office.

TUR: We will say that. And he didn’t mention it, obviously, at CPAC today. And again, it’s notable that he was – he was standing over –

VELSHI: The unhinged thing at CPAC that he did. I mean, it was crazy.

TUR: He was standing over a chant of “lock her up” for Hillary Clinton as his former senior campaign staffer was about to plead guilty in the Mueller probe.

VELSHI: To conspiring to defraud the United States of America.

VELSHI: This is an alternate reality in which we live, Katy. Thank you, have a good afternoon.