Media Thrilled That ‘Complicit’ is ‘Word of the Year’ Under Trump 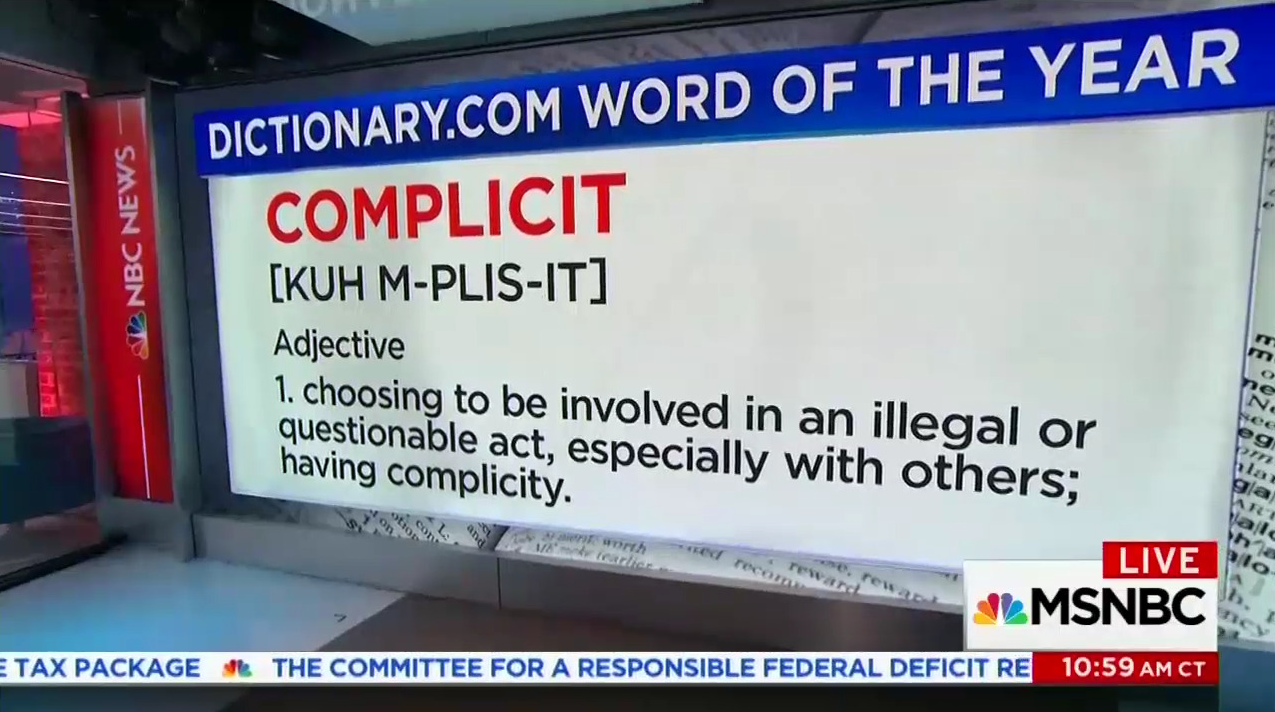 On Monday, Dictionary.com announced that it’s 2017 Word of the Year was “complicit,” citing left-wing accusations that anyone not fighting against the Trump administration was endorsing hate or racism. Liberal media outlets like The Washington Post and MSNBC gleefully seized on the dubious ranking as an exemplification of the Trump era.

“The word complicit has sprung up in conversations this year about those who speak out against powerful figures and institutions and about those who stay silent,” the Dictionary.com article explained. The website particularly targeted Ivanka Trump, noting how she was mocked for her alleged complicity in her father’s presidency and was grilled on the topic in a news interview:

The first spike in searches for complicit was on March 12, with a 10,000% increase in daily average lookups. This was the day after Saturday Night Live aired their satirical ad featuring Scarlett Johansson playing Ivanka Trump, hawking a perfume called Complicit. This scent was marketed as “The fragrance for the woman who could stop all this, but won’t.”

The largest increase in lookups for complicit this year (up over 11,000%) was on April 5. This time, the spike followed an interview with the real Ivanka Trump in which she attempted to redefine complicit. When asked by CBS This Morning’s Gayle King about accusations that she and her husband Jared Kushner are complicit in the actions of her father, Ivanka Trump responded: “If being complicit is wanting to be a force for good and to make a positive impact, then I’m complicit.”

Continuing to recite the liberal talking points of the Trump resistance, the piece accused Environmental Protection Agency Administrator Scott Pruitt of being “complicit in his refusal to acknowledge that humans play a primary role in climate change.” It also claimed that the President “showed his complicity with ideologies that promote hate” in the wake of the violence in Charlottesville. Finally, there was emphasis placed on social media companies having been “complicit in the propagation of propaganda, fake news, and disinformation” during the 2016 presidential campaign.

After listing all those it found guilty of complicity, the online dictionary proceeded to praise left-wing activists for standing up “in the face of oppression and wrongdoing” and demonstrating a  “refusal to be complicit”:

We saw an estimated five million people participate in the the worldwide Women’s March on January 21. We saw NFL quarterback Colin Kaepernick’s 2016 protest against systemic injustices gain even more traction in response to President Trump calling for players who kneel during the National Anthem to be fired or suspended....We saw high-profile resignations from the Trump Administration, perhaps most memorably from the Arts Council, who submitted their letter of resignation in the form of an acrostic spelling of the word RESIST.

Late Monday, The Washington Post offered this glowing assessment of the decision: “And according to the dictionary, complicity — or in some cases, the refusal to be complicit — was pertinent to some of the biggest news topics of the year...” The paper went on to highlight Trump’s most outspoken critics in 2017.

At the end of MSNBC’s 11 a.m. ET hour on Tuesday, anchors Stephanie Ruhle and Ali Velshi were delighted by the word selection. “Dictionary.com is out with its word of the year. We’ve heard it a lot this year: Complicit,” Ruhle proclaimed. Velshi informed viewers: “It means choosing to be involved in an illegal or questionable act, especially with others. The folks at Dictionary.com say they chose the word in honor of people who refused to be complicit this year...”

Dictionary.com has a history of promoting the Left’s favorite terms as word of the year. In 2016, they picked “xenophobia” as the defining adjective. In 2015, it was “identity,” as in gender identity.

Here is a transcript of the November 28 exchange on MSNBC: 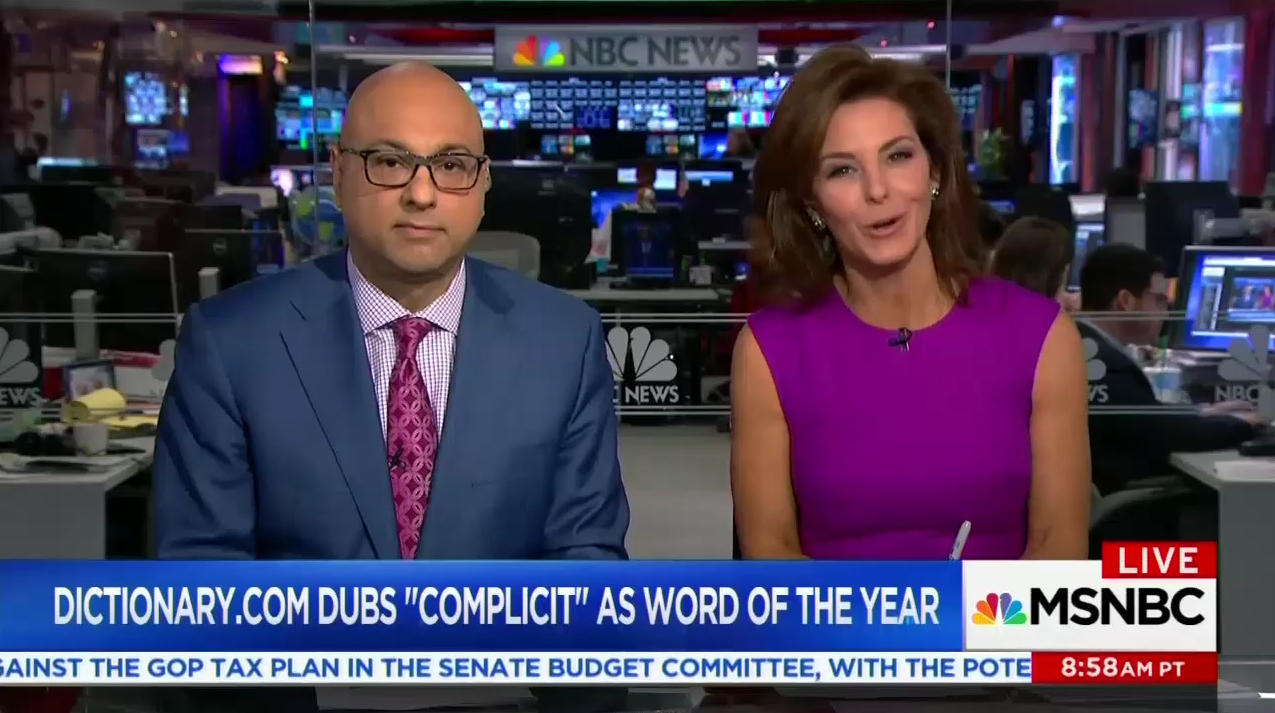 STEPHANIE RUHLE: Alright, before we go, this is one for you. Dictionary.com is out with its word of the year. We’ve heard it a lot this year: Complicit.

SEN. JEFF FLAKE: And so, Mr. President, I will not be complicit.

IVANKA TRUMP: I don’t know what it means to be complicit.

SATURDAY NIGHT LIVE: Complicit. The fragrance for the woman who could stop all this, but won’t. Also available in a cologne for Jared. Complicit.

ALI VELSHI: That’s fun. It means choosing to be involved in an illegal or questionable act, especially with others. The folks at Dictionary.com say they chose the word in honor of people who refused to be complicit this year, including the women who spoke up about sexual harassment and NFL player Colin Kaepernick, who protested racial injustice.

RUHLE: Or another example, you know, we showed Ivanka Trump there, and she said she doesn’t know the meaning of the word complicit. Ivanka Trump, I believe she has it in her bio on Twitter, but has said it regularly, that she is a champion for the advancement of women and girls. In June, she put out a tweet saying she stood with the LGBT community, said they were an important part of society and our economy. And I remind you, just last night in those remarks that Roy Moore gave in Alabama, he was speaking out against the LGBT community, saying there was no such thing as transgender rights. President Trump supports Roy Moore. So complicit is when you stand next to somebody who goes against something you say you fight for.