When President Trump voiced his opposition to NFL players disrespecting the National Anthem in September, the broadcast networks went wild with an avalanche of coverage that hailed a “firestorm of resistance” against the President and even suggested Trump was a racist. However, when NFL Commissioner Roger Goodell came out on Tuesday to demand that all players stand for the Anthem, the networks could only manage a few minutes on the story. 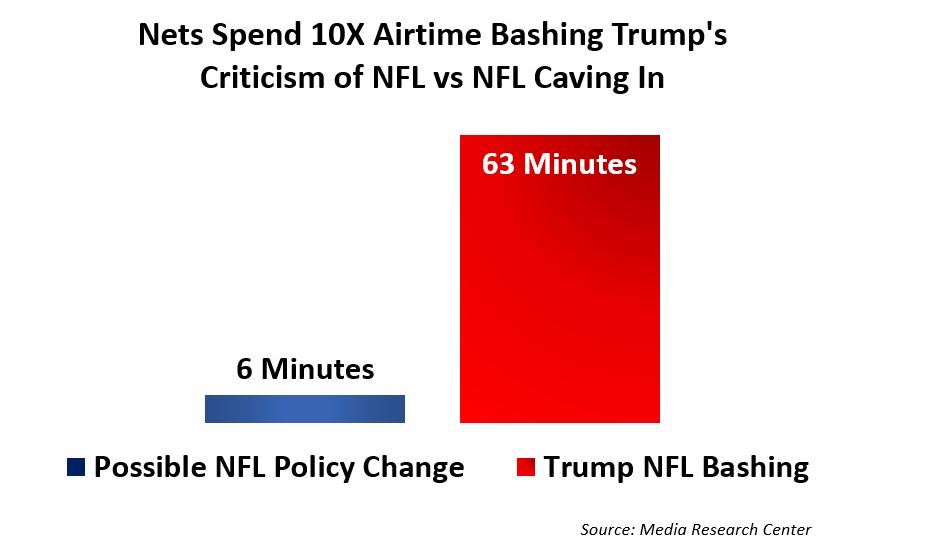 For comparison purposes, on Monday September 25 (the first weekday after Trump's remarks about the NFL), NBC churned out 13 minutes, 52 seconds of coverage; CBS spent 16 minutes, 13 seconds; while ABC devoted a whopping 32 minutes, 53 seconds of airtime to the controversy.

Add it all up, and the network morning and evening news shows that day spent more than an hour (62 minutes, 58 seconds) on the NFL story – 10 times more coverage than they spent last night and this morning on the news of what Today co-host Matt Lauer begrudgingly admitted was Trump’s “victory.”

In the first two days of weekday coverage following Trump’s September 22 NFL comments, the networks devoted an astounding 92 minutes of airtime to the controversy while only offering 25 minutes on the humanitarian crisis in Puerto Rico following Hurricane Maria.