On Monday, all three network morning shows covered the violent May Day rioting that broke out across Seattle on Sunday. However, the NBC, ABC, and CBS broadcasts made sure to tout how “the march began as a peaceful demonstration for the rights of workers and immigrants.” No liberal labels were used to characterize the protesters and the reporters avoided explaining the Communist roots of the day.

On NBC’s Today, co-host Matt Lauer described: “Violent May Day clashes in Seattle between anti-capitalist demonstrators and the police.” Correspondent Gadi Schwartz explained: “Police say they tried to take a hands-off approach, but when people started throwing things at them, they had to switch from crowd control into riot mode.”

Schwartz still found time to promote the left-wing agenda of the protest: “Earlier, many marching focused their anger on what they called a capitalist system.” A soundbite played of one demonstrator ranting: “I'm sick and tired of capitalism destroying this country.”

Moments later, Schwartz added: “And while most May Day demonstrations across the country were peaceful, once again, for the fifth year in a row, Seattle is cleaning up after another riot on the first day of May.”

At the top of the 8 a.m. ET hour, news anchor Natalie Morales reiterated: “The violence followed a peaceful march earlier in the day to support higher wages and immigrants’ rights. Officers said they had to use pepper spray when some protesters began throwing rocks, bricks, and Molotov cocktails.”

While explaining the supposed holiday, he suggested the blame for violence rested with other groups that had infiltrated the march: “May Day is traditionally celebrated throughout the world as a rallying cry to improve conditions for workers, but this year’s protest also brought its share of anarchists, who dressed in black and seemed intent on violence.”

On CBS This Morning, co-host Charlie Rose proclaimed: “At least five Seattle police officers are injured this morning after violent street protests....One officer was bitten and another was struck with a Molotov cocktail. The march began as a peaceful demonstration for the rights of workers and immigrants.”

In the report that followed, correspondent Nick McGurk highlighted: “Earlier in the afternoon, demonstrators lawfully marched to support labor and immigration reforms....May 1st is celebrated in many countries as International Workers Day.”

In an 8 a.m. news brief, Rose repeated: “Earlier, demonstrators peacefully marched to support labor and immigration reforms. But some protesters turned to violence and threw rocks and Molotov cocktails at police.”

Here are transcripts of the coverage on all three May 2 shows: 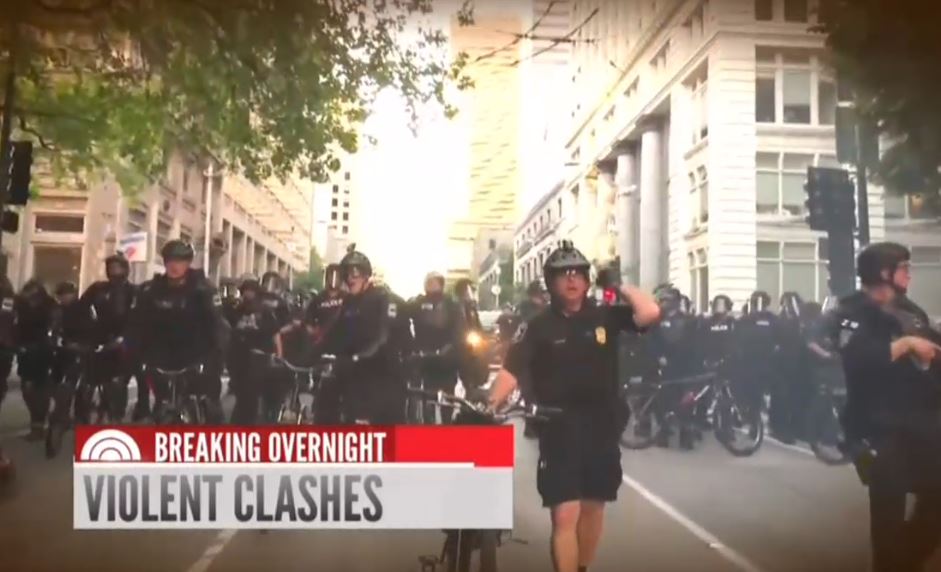 SAVANNAH GUTHRIE: The beginning of May, but this month is not entering quietly in Seattle.

MATT LAUER: No, the pacific northwest seeing some violence. It's our top story this morning. Violent May Day clashes in Seattle between anti-capitalist demonstrators and the police. NBC’s Gadi Schwartz is there. Gadi, good morning to you.

GADI SCHWARTZ: Good morning, Matt. Boarded up doors here in downtown Seattle after a chaotic night. Police say they tried to take a hands-off approach, but when people started throwing things at them, they had to switch from crowd control into riot mode.

The violence started with clashes throughout the city. Some demonstrators clearly dressed and armed for a fight. Quickly, the May Day protests in Seattle escalated into flash bangs and pepper spray.

UNIDENTIFIED MAN [PROTESTER]: We do not want to get hurt! We don't want to hurt anybody!

SCHWARTZ: Protesters sprinting for cover. Seattle police saying they were attacked with rocks and bottles.

KATHLEEN O’TOOLE [SEATTLE POLICE CHIEF]: The Seattle Police Department works hard to protect the First Amendment rights of those in our city. The demonstrators put some innocent people in jeopardy, so we had to take action.

SCHWARTZ: Earlier, many marching focused their anger on what they called a capitalist system.

SCHWARTZ: While some bystanders criticized the crowd.

UNIDENTIFIED MAN B [BYSTANDER]: And go get a life for theirself [sic] and do something positive.

SCHWARTZ: Making multiple arrests as the crowd thinned. And while most May Day demonstrations across the country were peaceful, once again, for the fifth year in a row, Seattle is cleaning up after another riot on the first day of May.

All told, nine protesters were arrested. There were five officers that were injured. Two of those officers were injured by things that were thrown at them. One officer was actually bitten by a protester. All of them are expected to be okay. Matt and Savannah, back to you. 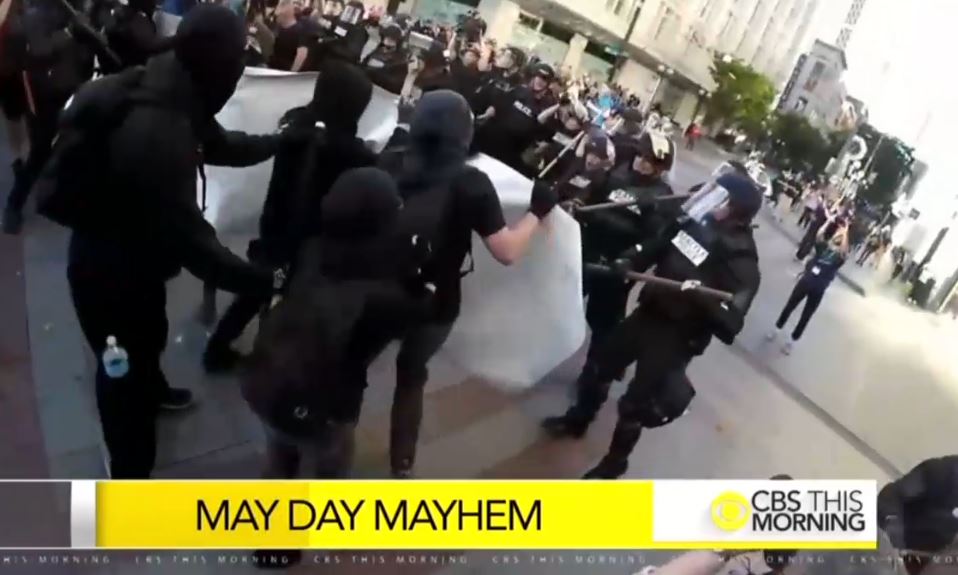 CHARLIE ROSE: At least five Seattle police officers are injured this morning after violent street protests. Police in riot gear arrested nine people yesterday during the May Day protests. One officer was bitten and another was struck with a Molotov cocktail. The march began as a peaceful demonstration for the rights of workers and immigrants. Nick McGurk of our Seattle affiliate KIRO shows how it turned violent. Nick, good morning.

NICK MCGURK: Good morning, Charlie. I want to show you, we're right in downtown Seattle. This is a Starbucks. You can see that boarded up window where they shattered the glass. And then right through the door there, that crumpled up glass inside of the bin. This is one of many violent incidents last night when protesters clashed with police.

Police armed with paintball guns shot off so-called “blast balls” to try and disperse hundreds of protesters who clashed with officers in Seattle Sunday evening.

UNIDENTIFIED MAN [PROTESTER]: You have no right to be firing on us!

UNIDENTIFIED MAN B: [Bleep] all of you!

UNIDENTIFIED WOMAN [REPORTER]: There is an injury out here.

MCGURK: A member of a television crew could be seen bleeding from his mouth and hand. Officers used bicycles to keep up with the unruly crowd.

MCGURK: And as barricades to try and control the mayhem.

WOMAN [REPORTER]: These police officers, they have this system going. They use their bikes to keep pushing us further down the street.

KATHLEEN O’TOOLE: We allow people to assemble and to March. But when it becomes violent and when the property damage becomes significant, we have to do something, and we did.

MCGURK: May 1st is celebrated in many countries as International Workers Day. Now we know that some of these protesters are likely going to be charged with obstruction, property crime, and assault. The FBI says that it also seized incendiary devices from one would-be protester early yesterday morning. Norah?

NORAH O’DONNELL: Alright, Nick, thank you so much. 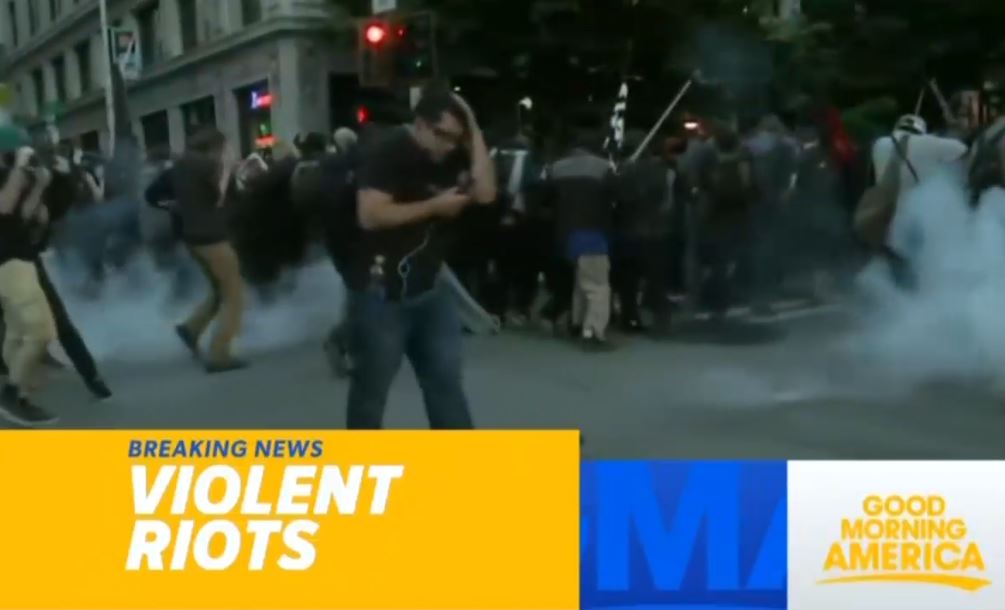 ROBIN ROBERTS: But first, we want to get right to the breaking news overnight, those violent May Day riots erupting in Seattle. Multiple people arrested after at least five officers were injured during clashes with protesters. ABC's Neal Karlinsky is in Seattle and has the latest for us. Good morning, Neal.

NEAL KARLINSKY: Robin, good morning. It was a quite a scene here on the streets of downtown Seattle. You can see this business one of several that boarded up to protect its property, it’s window. Still, it was hit with graffiti. You can see some of the signs that have been left behind by protesters as police and protesters clashed across the city.

May Day protests in Seattle turning into a free-for-all.

UNIDENTIFIED MAN [PROTESTER]: I thought it was going to be peaceful – you know, a peaceful March, but it didn't turn out to be.

KATHLEEN O’TOOLE [SEATTLE POLICE CHIEF]: We’ve said all along we will march around town with people all day long and once property damage started, we took action.

KARLINSKY: One officer struck by a rock, another injured by a Molotov cocktail, and one bitten. Throughout the early evening, protesters and police pushed and shoved, testing each other's limits.

UNIDENTIFIED MAN B [PROTESTER]: We don't want to hurt anyone!

KARLINSKY: Police dispensing pepper spray, firing rubber bullets at the crowd. Protesters responding with rocks and bottles. May Day is traditionally celebrated throughout the world as a rallying cry to improve conditions for workers, but this year’s protest also brought its share of anarchists, who dressed in black and seemed intent on violence. At this Costco parking lot, officers in riot gear blocked protesters, demanding they disband. Many refused, nine protesters arrested.

Seattle has had some trouble on May Day for years. So, police were staged and ready across the downtown area. Otherwise they feel like this could have been even worse, George.

STEPHANOPOULOS: Yeah, it sure could have been. Okay, Neal, thanks very much.