The network morning shows on Thursday were beside themselves with glee over the White House announcing President Obama would travel to Cuba in March. While all three broadcasts hailed the upcoming “historic trip,” it was ABC’s Good Morning America that went the extra mile by proclaiming the President was more popular than singer Beyonce on the island nation.

At the top of GMA, fill-in co-host Amy Robach announced: “Breaking overnight, President Obama will travel to Cuba, the first president to visit in more than 80 years. And the huge events in the works in Havana, from Major League Baseball to Beyonce.”

In the report that followed minutes later, correspondent Jim Avila touted: “It's a visit that marks the thaw of the Cold War and is scheduled to coincide with several other big USA/Cuba events. Major League Baseball is planning a preseason game there. Big entertainment names like Beyonce, Elton John, and the Rolling Stones are negotiating huge concerts.”

However, as Avila gushed, none of those acts could compare with the commander-in-chief: “But the biggest attraction is likely to be Obama, who may be the most popular politician on the island, bigger than either Castro brother, since diplomatic relations were restored between the two countries.”

Wrapping up the segment, Robach thanked him for his “great reporting” and remarked: “...it's good to know that Obama will be bigger than Beyonce.” Avila replied: “He is in maybe that one little spot in the world.”

While Avila’s report completely ignored any criticism of Obama visiting the communist dictatorship, during a news brief at the top of the 8 a.m. ET hour, Robach offered a single sentence of Republican opposition: “Cuban-American Marco Rubio called the trip part of the Obama administration's policy of, quote, ‘weakness and appeasement.’” 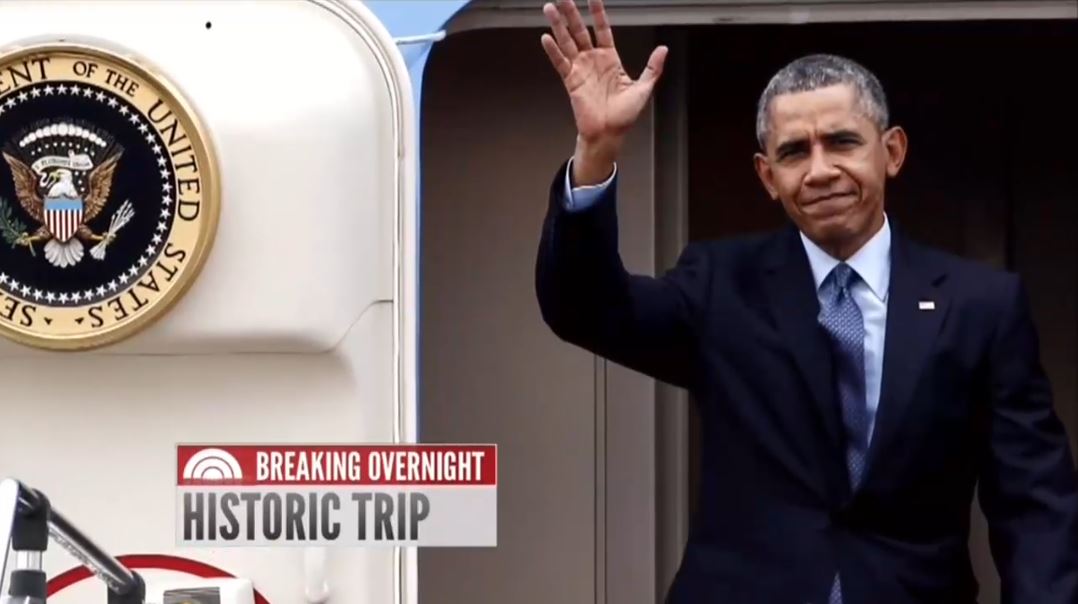 Leading off NBC’s Today, co-host Savannah Guthrie recited a headline nearly identical to GMA: “Breaking overnight, the White House expected to announce today that President Obama will head to Cuba next month, the first American president to go there in nearly 90 years. A historic trip already being met with both praise and criticism.”

Correspondent Ron Allen noted such criticism at the top of his report: “The administration’s many critics are saying it is much too soon to reward the Castro regime.” However, he later seemed to dismiss those critics as “hurdles” to be overcome:

Last August, the American embassy was reopened and a U.S. flag raised in Havana. Since then, Secretary of State John Kerry has traveled to the island. And just this week, U.S. and Cuban officials signed a deal to resume commercial air traffic for the first time in five decades.

Still, there are hurdles. Tourists cannot visit the island and trade cannot resume until Congress lifts the long-standing embargo, something Republicans have vowed to block. Republican presidential candidates Marco Rubio and Ted Cruz, both of Cuban descent, were quick to pounce on the announcement. Rubio saying he would not go if he were president.

Allen did conclude the segment by actually holding the President accountable for past statements: “Mr. Obama has said that he would not go to Cuba unless there was progress on human rights and that he’d be able to meet with opponents of the regime. It’s unclear whether that will happen amid reports the number of dissidents arrested and jailed by the Cuban regime is increasing.”

CBS This Morning only provided a 30-second news brief on the topic, with co-host Norah O’Donnell telling viewers: “Sources confirm to CBS News overnight that the White House is set to announce today that President Obama will make an historic visit to Cuba. The short stop-over in March will mark another huge step toward improving relations.”

Like ABC, she only allowed a single sentence of criticism, and even then, only vaguely referenced how “The plan drew immediate criticism from critics, including Republican presidential candidates.”

Here is a full transcript of Avila’s February 18 report on GMA:

AMY ROBACH: We have a big announcement now from the White House. President Obama expecting to make a historic trip to Cuba next month, the first sitting president in more than 80 years to visit that country. And ABC’s Jim Avila broke the story overnight. Good morning to you, Jim.

JIM AVILA: Good morning, Amy. ABC News has learned that later today the White House will announce the timing of President Obama's historic visit to Cuba. The first president to travel to the island since Calvin Coolidge. March will be a huge month for Cuba. President Obama, who in December of 2014 made history by vowing to normalize relations with Cuba and then shook hands with Raul Castro to solidify the deal, will now visit Havana March 21st and 22nd. It's a visit that marks the thaw of the Cold War and is scheduled to coincide with several other big USA/Cuba events.

Major League Baseball is planning a preseason game there. Big entertainment names like Beyonce, Elton John, and the Rolling Stones are negotiating huge concerts. But the biggest attraction is likely to be Obama, who may be the most popular politician on the island, bigger than either Castro brother, since diplomatic relations were restored between the two countries.

Now, sources tell me the National Security Council's second in command, Ben Rhodes, will make the announcement and confirm the date of the President's travel at the White House briefing today.

ROBACH: And, Jim, it's important to note you've been breaking headlines, and you were the first to break this story. So great reporting and it's good to know that Obama will be bigger than Beyonce.

AVILA: He is in maybe that one little spot in the world.