All three network morning shows on Tuesday noted how President Obama agreed to meet with Governor Rick Perry to discuss the illegal immigration crisis, all labeling the Texas Republican to be the "harshest" and "strongest" "big critic" of the commander-in-chief's mishandling of the chaos on the border. The only problem was that none of the broadcasts featured a single second of Perry actually voicing that criticism. [Listen to the audio or watch the video after the jump]

On ABC's Good Morning America, White House correspondent Jon Karl summarized Perry's recent condemnation of Obama's lack of action on the issue: "Perry has been one of the harshest critics here. On This Week he said he doesn't believe the President really cares whether or not the border is secure." Co-host George Stephanopoulos chimed in: "Yeah, he suggested there might even be a conspiracy to have more kids come over."

Rather than simply play an accurate clip of what Perry actually said on their network's own Sunday show, Karl and Stephanopoulos were content to portray him as some kind of conspiracy theorist.

On CBS This Morning, White House correspondent Bill Plante proclaimed: "Perry, who could be a Republican presidential candidate, has been one of the President's strongest critics on immigration."

Again, there was no clip of Perry speaking, but Plante did find time to scold the Governor for rejecting a brief frivolous photo-op initially offered by Obama: "The White House reached out to Perry after he turned down an airport greeting, even though Perry has come to the airport in the past when the President has come to Texas."

On NBC's Today, correspondent Peter Alexander declared: "One big critic, the Republican governor there, Rick Perry, has turned down an invitation to meet with the President at the airport, saying that basically wouldn't give them enough time to discuss the growing crisis."

No sound bite from Perry was included, but Alexander did refrain from taking any jabs at the GOP politician, simply concluding: "Overnight the White House wrote Perry a letter saying that Obama would welcome a visit with Perry to speak about the border."

While there was no room for Perry's statements, CBS and NBC did find time to feature clips of left-wing activists supporting illegal immigration.

In a report from correspondent Miguel Almaguer on Today, Casa De Virginia executive director Gustavo Torres hit Obama from the left: "The President has failed to act with urgency and competency that is required to ensure these children as well as all immigrants are treated humanely."

On This Morning, correspondent Ben Tracy teed up another illegal immigration advocate to slam those calling for the deportation of those streaming across the border:

TRACY: Jordan Carroll came to Murrieta to support these children she views as refugees. What did you think about the scenes you saw here last week?

JORDAN CARROLL: It was so disturbing, it made me sick. The people, as you see over there, telling these kids to go home. Screaming at them. Like mortifying these already terrorized children. Who are we to do that?

Tracy wrapped up his report by trying to bolster Carroll's argument: "Meanwhile, the United Nations is pushing for them to be treated as refugees."

Here are transcripts of the July 8 network morning show coverage of Obama agreeing to meet with Perry:

GEORGE STEPHANOPOULOS: We turn now to President Obama and that growing humanitarian crisis on our southern border. The President heading to Texas this week and sending Congress a request for more than $2 billion in emergency funding to deal with the flood of children from Central America crossing into the United States. ABC's Jon Karl covering that from the White House. And Jon, the President is taking heat from all sides on this issue.

[ON-SCREEN HEADLINE: Obama to Act on Border Crisis; Will Ask for $2 Billion in Emergency Funds] 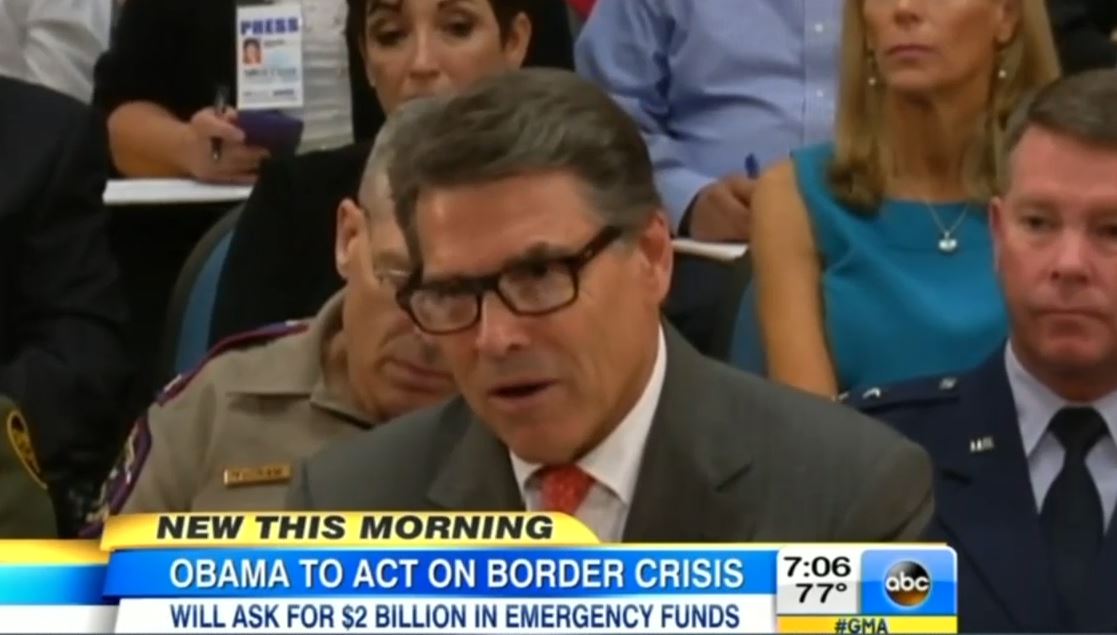 JON KARL: Oh, he sure is, George. And he's just announced – the White House has just announced that the President is offering to meet with Governor Perry while he was in Texas because one of the strongest lines of criticism here is the President is going to Texas for political fundraisers but is not going to be visiting the border. Perry had asked for a meeting, now he's going to get his meeting. But Perry has been one of the harshest critics here. On This Week he said he doesn't believe the President really cares whether or not the border is secure.

STEPHANOPOULOS: Yeah, he suggested there might even be a conspiracy to have more kids come over. Meantime, the President is holding off on asking Congress for new power to send those kids back more quickly.

STEPHANOPOULOS: That's right, but right now, only a tiny fraction of the kids have been sent back. Jon Karl, thanks very much. 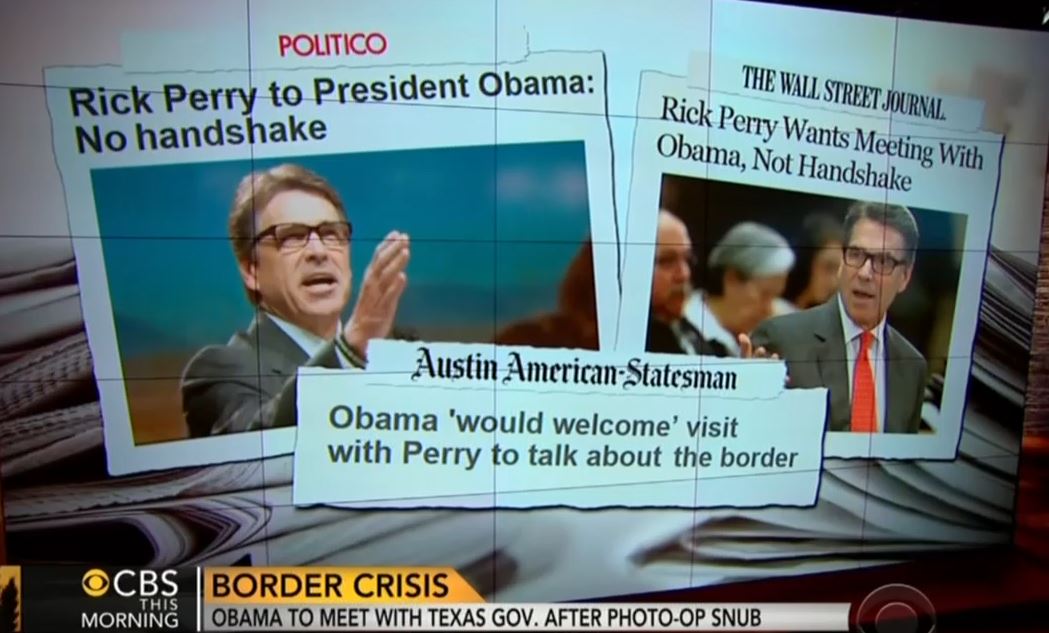 NORAH O'DONNELL: And the White House confirms this morning that President Obama will talk immigration with the Governor of Texas tomorrow. Bill Plante is at the White House with details on the meeting set up after Rick Perry said no to a photo-op. Bill, good morning.

BILL PLANTE: Good morning. Well, Perry, who could be a Republican presidential candidate, has been one of the President's strongest critics on immigration. The White House reached out to Perry after he turned down an airport greeting, even though Perry has come to the airport in the past when the President has come to Texas.

The administration will send a big request to Congress today, almost $3 billion to deal with the thousands of migrant children from Central America. The White House insists that most of them will be returned, but it's also trying to arrange temporary shelters, including one in Dallas.

White House officials say the President will not go to the valley – to the border while he's in Texas. Although he will reach out tomorrow at a roundtable in Dallas to discuss the issue. The whole thing has become a huge political problem for the administration. Gayle.

GUTHRIE: We'll get right to our top story this morning. And it is that crisis at the border. A flood of immigrants flooding in by the day, the President's push for big money from Congress today, and the controversy over his decision not to visit the border when he's in Texas this week. NBC's national correspondent Peter Alexander has all the headlines from the White House this morning. Peter, good morning to you.

PETER ALEXANDER: Savannah, good morning. That request will be sent today. And specifically I'm told that President Obama's going to ask Congress for significantly more than $2 billion to deal with that flood of unaccompanied children who are pouring across the border. The money is designed to help cover the cost of additional resources, things like immigration judges and government lawyers. At least for now the President is not calling on Congress for any specific legal changes to deport those kids more quickly. 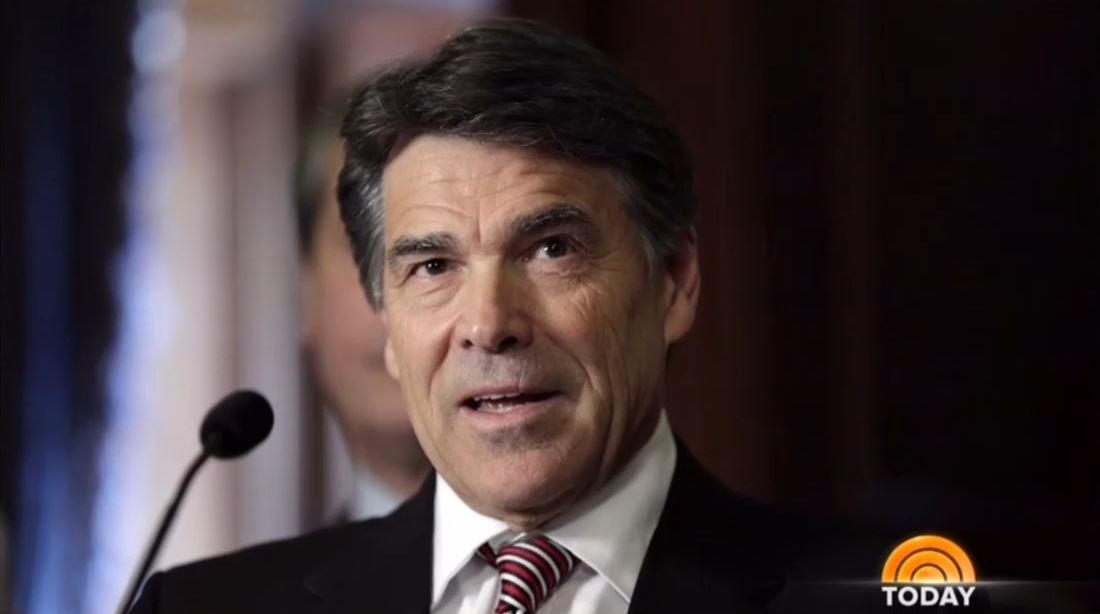 Late today, President Obama, as you noted, leaves for a two-state fundraising tour. He arrives in Texas tomorrow, but the White House insists that Mr. Obama has no plans to visit the border.

One big critic, the Republican governor there, Rick Perry, has turned down an invitation to meet with the President at the airport, saying that basically wouldn't give them enough time to discuss the growing crisis. But Savannah, overnight the White House wrote Perry a letter saying that Obama would welcome a visit with Perry to speak about the border.

GUTHRIE: Alright, Peter Alexander at the White House. I know you're keeping an eye on it, thank you.