Appearing on Andrea Mitchell's MSNBC 1 p.m. ET hour show on Tuesday, Wisconsin Congressman Sean Duffy slammed the press for not doing its job in pointing out the hypocrisy of ObamaCare being delayed for certain groups but not for all Americans: "...the media won't even ask the question about, 'Why are you [the Obama administration] treating families different than big businesses?'...That's how pathetic, I think, news reporting has become, when we won't ask tough questions to the administration." [Listen to the audio or watch the video after the jump]

That response was prompted by Mitchell ranting that Republican calls for a one-year delay of the ObamaCare individual mandate was a "non-negotiable demand." Moments later, after Duffy explained that the GOP has "been incredibly reasonable, making a small ask," Mitchell was aghast: "Do you consider it a small ask that he [Obama] get rid of the central part of his health care plan that was upheld by a – by the vote of a presidential election, and the United States Supreme Court." Duffy replied: "Andrea, hold on. That's your spin." Mitchell laughably asserted: "That's not spin."


Duffy pointed out what a joke media coverage of ObamaCare had become:

You need Jon Stewart on Comedy Central to ask [Health and Human Services] Secretary [Kathleen] Sebelius, 'Hey, why won't you treat these two equally?' And she can't answer it....'Why do you want your own health care and you won't join us in ObamaCare?' That question I haven't seen anybody ask on MSNBC. Please ask it, because they don't have a good answer for it.

Mitchell argued: "Well, we've asked questions to both sides. That's not fair. We have asked the question..."

Perhaps realizing that fact, Mitchell was forced cite Sebelius on The Daily Show: "Well, I think the response would be – the response that Kathleen Sebelius gave to Jon Stewart was, 'If we had gotten what we wanted, which was a single-payer plan, this wouldn't be the problem.'" Duffy noted: "That's right, you say, 'I think this is what they would say,' but you don't know what they would say because you haven't asked."

Wrapping up the segment, Duffy reiterated: "We're just saying treat individuals and families like big business and have Obama go into ObamaCare. That's it. No one asked that question but Jon Stewart. I think the media should start doing its job."

Mitchell snidely remarked: "Thanks for your advice."

Here is a full transcript of the October 8 interview: 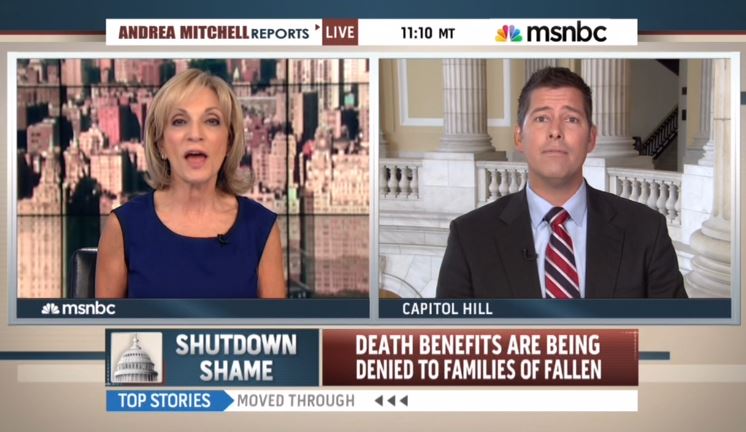 ANDREA MITCHELL So what do lawmakers say? How do they justify continuing the standoff? One of those five service members killed [in Afghanistan during the government shutdown], as we've reported, was from Wisconsin, and joining me now is Wisconsin Republican Congressman Sean Duffy, a member of the House committee on the budget. Congressman, I'm not ascribing blame any place, other than to the entire system here. How do you respond to the mother of Corporal Collins?

REP. SEAN DUFFY [R-WI]: First off, my heart and prayers go out to the families who have lost loved ones in battle and I'm so grateful for the ultimate sacrifice these young individuals have made on behalf of our country. As we've talked this morning, we are going to work through this week, a mini C.R. that would help with this funding [for death benefits to families of fallen soldiers]. Duncan Hunter, as you mentioned, had indicated that this is in the discretion of the government. If they disagree, we will work this week to make sure-

MITCHELL: The Pentagon disagrees with that.

DUFFY: Right. So if they disagree, we'll work through a mini C.R. that will take care of these families who have lost loved ones. That is not the intent of this shutdown.

MITCHELL: But I mean the larger point, though, Congressman Duffy, is these mini C.R.s, mini continuing resolutions, that's the whole question of, you know, taking little pieces of the government. The issue is not that this is a small matter, it's a very big matter, but so is the matter of the kids in Head Start. So is the problem of the single moms who aren't getting food stamps and aren't getting their help. You know, so down the road are the survivor's benefits, and that fund is going to run out in weeks, if not months.

So you can't take this piecemeal, Congressman. You know, isn't the issue that someone has to sit down and figure out what to do about the stalemate that has led to this disgrace?

DUFFY: Well, you hit the nail on the head. I mean and the President has said, "I won't sit at the table." Harry Reid said, I won't negotiate."

MITCHELL: Well, he – no. He said to the Speaker today on the phone, according to the White House-

DUFFY: Andrea, that's ridiculous. And I don't know – I mean I think you said you've been through 18 shutdowns.

DUFFY: I don't know if you've seen a president that has come and said, "I'm not going to negotiate." I mean this is historic, that a president says, "I'm not going to sit at the table." As a guy that's the 10th of 11 kids, families work through problems by talking and communicating, so to does the government.

And you're well aware that all we've asked for is that the President and the administration join us in ObamaCare, the American people and Congress, and that individuals and families be treated just like big business. That's what they're holding out for and I think – I mean even this morning-

DUFFY: Listen, Andrea – listen, is it non-negotiable that he's not gonna enter ObamaCare? And he's gonna say, "I get my gold-plated health care plan but I want members of Congress and the rest of America to be in ObamaCare." That's non-negotiable? Come on. That's not reasonable.

I mean, one issue we have is the media won't even ask the question about, "Why are you treating families different than big businesses?" You need Jon Stewart on Comedy Central to ask Secretary Sebelius, "Hey, why won't you treat these two equally?" And she can't answer it. I mean, that's how pathetic I think news reporting has become, when we won't ask tough questions to the administration.

DUFFY: Do you ask that question, Andrea? Ask the question.

MITCHELL: We have asked the question, and the basic point is that-

DUFFY: "Why do you want your own health care and you won't join us in ObamaCare?" That question I haven't seen anybody ask on MSNBC. Please ask it, because they don't have a good answer for it. But in regard to actually-

MITCHELL: Well, I think the response would be – the response that Kathleen Sebelius gave to Jon Stewart was, "If we had gotten what we wanted, which was a single-payer plan, this wouldn't be the problem."

But I think in regard to negotiating issues, Andrea, I think we can sit at the table and go, "Okay, well, if these ones are off the table, what is on the table, Mr. President, as we move towards the debt limit negotiation?" And he would say, "Well, lets talk. Maybe it's going to be entitlement reform, maybe it's tax reform." We'll have all those conversations. But when he says, "You have to give me what I want, I'm not going to talk to you," I think America looks at that and goes, "I understand there was divided government, people are hard on both sides, but I expect them to talk to each other and work through their differences and make it work." And that's not happening now, Andrea.

MITCHELL: Congressman, this is about – with all due respect, this is about military death benefits to kids, to 19-year-old kids who have died in Afghanistan and who are not returning home. This is about what their families are entitled to by law and what they are not getting.

DUFFY: And I just told you that we're gonna move-

MITCHELL: This is not about what you want on ObamaCare and it's not what the President wants on the debt ceiling.

DUFFY: Don't spin that on me. I just told you at the top of our segment that we're gonna pass a mini C.R. to address those benefits. We're going to look out for our military, especially those families who have made the ultimate sacrifice. We are gonna do that and we're gonna do it this week.

So you were asking me about the larger issue of why can't people resolve this government shutdown. And we have been incredibly reasonable, making a small ask. And if the President doesn't like what we-

MITCHELL: Do you consider it a small ask that he get rid of the central part of his health care plan that was upheld by a – by the vote of a presidential election and the United States Supreme Court?

DUFFY: The President gave a one-year exemption for – listen, he gave a one-year exemption for businesses in regard to taxes and penalties on ObamaCare. Everyone still can go into the exchange if they want, but they're not penalized in big business if they don't go in. We've said for the individuals, for the families, if they want to go into ObamaCare they can. But if they don't, for one year don't tax them or penalize them, just like the way your treating big businesses. That is fair under the law. That's all we've asked for.

He's won the debate, Andrea. The exchanges are up and kind of running. There's subsidies out there. This is a small ask on equity and equality under the law for individuals and families, just like big business. And why won't he join us in ObamaCare? Why wasn't Michelle Obama on October 1st at the computer with her family signing up for ObamaCare? Or Jay Carney? They have their own gold-plated health care plan that they're in and they don't-

MITCHELL: So do you.

MITCHELL: I think that the-

MITCHELL: I can't defend why...

DUFFY: Then you should ask that question to him.

MITCHELL: ...Congress and the White House cannot figure out a way to reopen the government...

DUFFY: Then ask them that question, Andrea.

MITCHELL: ...so that our kids and their families can get the benefits that they have been-

DUFFY: Listen, and I've told you that we're gonna do that this week. But I want your viewers to know that this has been a reasonable approach by – on our part to go, "Everyone equal under the law, the President and Congress in ObamaCare." If it's good for America, it's good enough for the people who passed the law. And individuals for one week – for one year being treated like big business who came to this hill with their lobbyist and got an exemption to the taxes and requirements of ObamaCare. Give that same treatment to the families in America.

And again, this has nothing to do with the exchanges being open or the subsidies in the exchanges. We're not having any impact on those. They get to stand up and run. We're just saying treat individuals and families like big business and have Obama go into ObamaCare. That's it. No one asked that question but Jon Stewart. I think the media should start doing its job.

MITCHELL: Thanks for your advice. Thank you, Congressman.