Reporting from the White House lawn during NBC's live coverage of the Supreme Court's rulings in favor of gay marriage on Wednesday, correspondent Peter Alexander touted how the decisions were "very personally satisfying for the President, who it was only about a year ago during the course of the campaign...came out and said that he has had this personal evolution on the topic..." [Listen to the audio or watch the video after the jump]

Minutes later, Alexander recited a tweet from the President: "He said the following: 'Today's DOMA ruling is a historic step forward for #marriageequality,' and then he wrote, '#loveislove.'" After quoting a similar celebratory tweet from Obama advisor Jim Messina, Alexander observed: "Clearly this is a very content White House on this day."

During a live interview on MSNBC later in the morning, gay marriage supporters got a congratulatory phone call from the President.

MATT LAUER: I want to go to Peter Alexander at the White House for the reaction in terms of the political side of all of this. Peter, good morning to you. 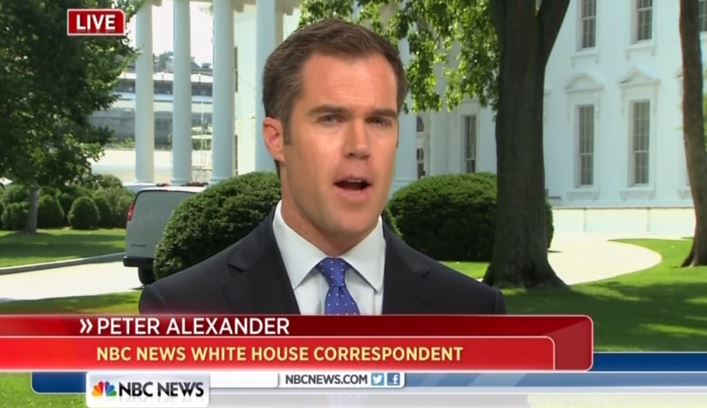 PETER ALEXANDER: Matt and Savannah, good morning to you. Right now of course the President is traveling to Africa. We know from his top advisers that they are monitoring the Supreme Court decisions onboard Air Force One right now.

But within the last two minutes, I just heard from a senior adviser to the President who said that at the President's direction the Department of Justice now going forward will take the lead on analyzing today's decision and the issues that need to be worked out for implementation. That's significant because the next question for this administration is exactly how they go about trying to implement the decision that we heard from the Supreme Court declaring DOMA to be unconstitutional. They need to rework all the rules and regulations as they apply to things like Social Security benefits and taxes.

GUTHRIE: And Peter, we've seen the President himself evolve, to use his word, on this issue. Initially during the 2008 campaign he did not support same-sex marriage, later he said he did. There was a time when the Department of Justice defended this lawsuit that was – this law, DOMA, that was just struck down, then they stopped defending it, but the administration is still enforcing it.

ALEXANDER: Yeah, no, that's exactly right. This is very personally satisfying for the President, who it was only about a year ago during the course of the campaign – in a decision ultimately that seemed to be made hastily as a result of Joe Biden on Meet the Press saying that he supported equal rights for same-sex couples – the President came out and said that he has had this personal evolution on the topic and said that he nor his justice – his attorney general Eric Holder would defend the Defense of Marriage Act.

LAUER: Alright, Peter Alexander at the White House. Peter, thank you very much.

GUTHRIE: We want to get back to Peter Alexander, he's at the White House, he's got more reaction. Peter, what can you tell us?

ALEXANDER: Yeah, Savannah, we have now got our first formal reaction from the President of the United States Barack Obama. As we noted, he is flying right now aboard Air Force One en route to his week-long trip in Africa. He just tweeted a second ago, which shows you not only how this issue has changed, but the way that we communicate information has changed. He said the following: "Today's DOMA ruling is a historic step forward for #marriageequality," and then he wrote, "#loveislove."

We also heard just moments before that from one of the President's top advisors during the course of his campaign, Jim Messina, who ran the campaign, who just said, "Supreme Court gets DOMA right!" Clearly this is a very content White House on this day. Savannah and Matt.

GUTHRIE: Alright, Peter Alexander, we'll ask you to continue to stand by as we await the second decision.