CBS 'Early Show' Sees Kagan As Not Liberal Enough, Maybe on the Right 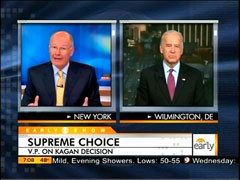 In an interview with Vice President Joe Biden on Tuesday's CBS Early Show, co-host Harry Smith lamented President Obama's nomination of Elena Kagan to the Supreme Court: "Liberals feel let down because she would be filling a seat left by John Paul Stevens, they don't feel like she's enough – has enough gravitas to fill his shoes."

In an interview with Republican Senator Jeff Sessions immediately following the Biden interview, co-host Maggie Rodriguez went so far as to wonder if Kagan would have a conservative influence on the court: "When she worked for the Clinton administration, Ms. Kagan asked the President to support a ban on all abortions of viable fetuses except when the mother's health was at risk. And some analysts have used that example to show that she may actually shift the court to the Right, compared with Justice Stevens. How do you respond to that?"

Rodriguez was referring to a Monday Associated Press report that detailed a memo Kagan wrote in 1997, advising Clinton to support a ban on partial-birth abortions. However, Rodriguez failed to note that the article concludes that Kagan's advice was "more of a political calculation than a legal brief." It pointed out:

The abortion proposal was a compromise by Democratic Sen. Tom Daschle. Clinton supported it, but the proposal failed and Clinton vetoed a stricter Republican ban. In a May 13, 1997, memo from the White House domestic policy office, Kagan and her boss, Bruce Reed, told Clinton that abortion rights groups opposed Daschle's compromise. But they urged the president to support it, saying he otherwise risked seeing a Republican-led Congress override his veto on the stricter bill.

In other words, Kagan recommended Clinton support the more moderate ban, rather than risk the possibility that the Republican Congress would push through tougher legislation. The memo was more about political expediency than a statement of principle by Kagan.

Rodriguez began the interview with Sessions by citing Biden: "I'd like first to ask you to respond to Vice President Biden's prediction that Elena Kagan will be confirmed with strong bipartisan support. Will, as he put it, his 'Republican friends' proceed as he expects they will?" At the end of his interview with Smith, Biden had proclaimed: "I am confident of that, assuming that our Republican friends proceed as I expect they will....I think she'll pass and I think she'll pass with strong bipartisan support."

On Monday night, the CBS Evening News was the only network evening newscast to identify Kagan as a liberal. It appears Tuesday's Early Show was trying to back off that label.

Here is a full transcript of Smith's interview with Biden:

SMITH: Very well. All kinds of criticism coming this morning about the choice of Elena Kagan to be the next Supreme Court justice, associate justice. Some people have said she's a person so careful as to leave no footprint. Do you really know what you're getting? Do the American people know what they're getting?

BIDEN: Well, the American people see what they're getting. They're getting a woman who is practical, a woman who is committed, a woman who is open-minded, and a woman who does what judges are supposed to do, listen to both sides of the argument. And I do know her, she used to work for me on the Judiciary Committee years ago, when we were both a lot younger, she's still young. And I do know her and she has an exemplary record, Harry, and she's a tenured professor at Chicago, left to go work for the government, then became Dean of Harvard Law School, the first woman in the history of that great institution, and she left to become solicitor general. And she's now what everybody calls the 10th justice, Supreme Court justice, solicitor general.

SMITH: Liberals feel let down because she would be filling a seat left by John Paul Stevens, they don't feel like she's enough – has enough gravitas to fill his shoes.

BIDEN: Well, look, John Paul Stevens, who swore me in as Vice President of the United States, is a friend and I don't know that anybody's going to fill his shoes. But when John Paul Stevens was appointed, I don't recall liberals being particularly happy at the time. And the fact of the matter is, this woman is incredibly qualified. Again, Dean of the Harvard Law School, solicitor general. I mean, look at the people whose record she is similar to. Rehnquist, Justice Jackson, Marshall. I mean, you know, these are – you know, she is – she comes with a very strong record.

BIDEN: Well, I think that criticism will be made, but I point out Justice Jackson, Hugo Black, although he was a senator, you have Rehnquist, Chief Justice Rehnquist, who never was any of the things you just mentioned. And so her – I guess her career most closely parallels Rehnquist, except she's solicitor general. And she's the dean of a famous law school. But look, there are a number of really incredible justices who have never been prosecutors, never been a judge, never been a public defender.

SMITH: The political climate grows more contentious by the day. Are you confident-

SMITH: -she is confirmable by the end of the summer and would be ready to take the bench by fall?

BIDEN: I am confident of that, assuming that our Republican friends proceed as I expect they will, they've had plenty of time, there's been plenty of notice. They moved expeditiously with Sotomayor and we moved with, when President Bush's last two nominees. We moved them in plenty of time. I think there'll be, you know, a lot of noise, but this is a mainstream incredibly qualified woman to be the third woman to sit on the Supreme Court. I think – I think she'll pass and I think she'll pass with strong bipartisan support.

SMITH: Vice President Joe Biden, we thank you for your time this morning. Do appreciate it.

BIDEN: Thanks a lot, Harry.

Here is a full transcript of Rodriguez's interview with Sessions: 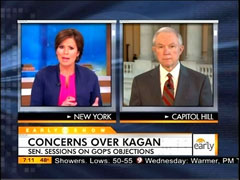 MAGGIE RODRIGUEZ: Republican Senator Jeff Sessions is the ranking member of the Senate Judiciary Committee. He voted against Elena Kagan's nomination for solicitor general last year and this morning he joins us live from Capitol Hill. Senator Sessions, good morning to you.

JEFF SESSIONS: Thank you, good to be with you.

RODRIGUEZ: Good to have you. I'd like first to ask you to respond to Vice President Biden's prediction that Elena Kagan will be confirmed with strong bipartisan support. Will, as he put it, his 'Republican friends' proceed as he expects they will?

JEFF SESSIONS: I think the Congress and the Senate needs to examine her record carefully. This is not a coronation. She's going to be subjected to scrutiny. We need to know whether or not, once she obtains that robe and sits on that bench, will she be an objective person, will she say no even to the Obama administration and some of their agenda items if they're unconstitutional. She's got to demonstrate that or she shouldn't be given a lifetime appointment.

RODRIGUEZ: When she worked for the Clinton administration, Ms. Kagan asked the President to support a ban on all abortions of viable fetuses except when the mother's health was at risk. And some analysts have used that example to show that she may actually shift the court to the Right, compared with Justice Stevens. How do you respond to that?

SESSIONS: I don't sense that she would, on that issue, move the court to the Right. That partial birth abortion situation was something that is to me unthinkable that somebody would oppose that. So she was correct on that for sure. But I don't know that that reflects any serious disagreement with the court's view on abortion.

RODRIGUEZ: What do you need to hear that would convince you to support her as a justice of the Supreme Court?

SESSIONS: I'm not sure what we'll be looking to hear. I'll be meeting with her personally, I look forward to that. She's got a good academic background. But not much actual practical experience. Her – most of her actual legal experience has been in sort of political law, been within the Clinton administration or the Obama administration. We need to know that she's got the personal discipline that good judges and good lawyers have so that day after day, week after week, it won't be her politics or her ideology, but the law and her fidelity to it, will – that will decide how she handles her cases.

RODRIGUEZ: Has she, in your view, shown otherwise as solicitor general?

SESSIONS: I think we're going to look at that record. It's not been long, just a little over a year. It's a good legal position. It's the first real significant legal position she's ever had. So I think it is something to examine.

RODRIGUEZ: And lastly, your prediction, will she or won't she be confirmed by the summer, ready to take the bench by the fall?

SESSIONS: Well, I'm not going to predict that. I think it'll depend on how well she does. The American people need to know that this appointment is very, very important for our country. The next Supreme Court, as configured, will decide many important issues about the limited nature of the federal government and is it actually limited still today. So those are important issues. Her background is on the other side. She's been a liberal political activist throughout her life. And she'll need to put that aside and be an objective judge. That will be, I think, the examination's center.

RODRIGUEZ: Alright, Senator Jeff Sessions, thank you so much for your time, sir.