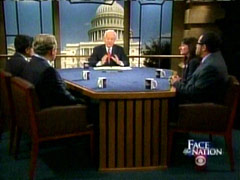 On Sunday’s CBS Face the Nation, host Bob Schieffer discussed the challenges President-elect Barack Obama will face with liberal authors: "Today we ask the authors of four of the year's most important books to assess the problems the new administration will face." Schieffer asked the Washington Post’s Bob Woodward, author of ‘The War Within: A Secret White House History,’ about Obama picking Hillary Clinton as secretary of state, Woodward replied: "It's an amazing national security team that Obama appears to have selected. It's kind of like 'Goldilocks and the Three Bears.' You've got too cool, which might be -- or at least appropriately cool, General Jones as the national security adviser; Gates is kind of just right, in the middle; and Hillary Clinton, hot."

Schieffer later turned to the New Yorker’s Jane Mayer, author of ‘The Dark Side: The Inside Story of How the War on Terror Turned into a War on American Ideals,’ and asked: "...your fascinating book, 'The Dark Side,' tells how the current vice president, Richard Cheney, amassed power unknown to any vice president in our history. I'd like to ask you first, how did he do that? And do you see Joe Biden having the kind of power?" Mayer replied: "it takes a president like Bush to have a vice president like Cheney. Obama, so far, seems to be so much more involved in the details and in kind of wanting to command the policies all the way up and down, really -- so I don't see it repeating." Mayer then went on to compare the Bush and Obama administrations:

Another difference that's very important is that both the president coming in and the vice president are lawyers, and one of the things that happened in the last administration was neither of them were. They were not constitutional scholars and they enacted policies that -- including legalizing torture for all purposes -- that really were not constitutional. And I don't think we're going to see that again. This is a -- this is a group of people who -- and the secretary of state is also a lawyer now. These people respect the law, I think.

Schieffer then examined the racial aspect of Obama’s administration with University of Pennsylvania professor Michael Eric Dyson, author of ‘April 4th, 1968: Martin Luther King Jr.’s Death and How it Changed America,’: "What is the fact that we will have our first African-American president. Obviously that's historic...But what -- what impact do you think that that will have?" Dyson replied:

Well, obviously Martin Luther King Jr. laid the predicate for the rise of Barack Obama, as did Jesse Jackson in '84 and '88. Jesse Jackson had to be the brutal linebacker who opened up the space for Mr. Obama to slither through with grace...It may not be his race as much as his community organizing background that will play a significant difference here, because a person who's organized poor people, who's attempted to get their interests and concerns as part of his bailiwick will exert a profound influence over those issues when it comes to the economy, when it comes to making America safe, when it comes to protecting borders and when it comes to trying to articulate ideas that will resonate not simply with Africa-Americans, but more broadly. I mean, the fact that you have a black first family, two beautiful children, a intelligent and brilliant wife and an intelligent and brilliant president does an enormous good to people. The psychological advantage of waking up every morning, seeing that this is the most powerful man in the world, does an incredible amount of good to people who look on.

Schieffer followed up: "Do you think having an African-American president will have more of an impact on black people or white people?" Dyson observed:

Well, I think certainly for the broader society, the mainstream society, I think white Americans certainly probably never felt they'd see this day. They always say black people say, 'Boy, I never thought I'd see the day that a black man would be in the White House.' But many more white Americans, perhaps, felt the same thing...So I think that for white Americans to see an intelligent, articulate, sophisticated, cool black man whose feathers are not easily ruffled, who is able to carry himself with a manner of self-possession and confidence without bleeding into the Bush swagger that ended up being quite reckless, I think is an -- is a -- is a example that black people can, when chosen, perform a job, and that when they perform and execute that job they do so with passion and intelligence. And I think that's a tremendous signal to the broader world.

Mayer then suggested Obama being black would help the war on terror:

It certainly -- to the rest of the world, it sends a tremendous signal, I agree. I mean, especially at a point where we're being accused in this country of not living up to our ideals because of things like Guantanamo and black site prisons. And so to have an election where it shows that democracy really works, and there's a meritocracy in the country and racism isn't going to stop somebody from getting to the top, I think has been a tremendously, you know, just liberating moment for the country and for the rest of the world to see this. And it's totally discomfited al-Qaeda, among others. I mean, you've got these bizarre sort of statements from Ayman Zawahiri, the spokesman for al-Qaeda, trying to sort of readjust himself and say that, you know, there -- it -- America is still a, you know, a racist country. He's kind of at a loss for how to deal with this. So it's been very helpful.

Woodward joined in the praise:

But there's -- and there is all of this optimism and hope. I mean, it's running on eight cylinders at full speed. And if you go back eight years when Bush was coming in, there was optimism then -- compassionate conservative, moderate, crackerjack national security team, $5.4 trillion surplus. Remember that? Everyone's going to get a tax cut. 9/11 came along, the reality of the economy, and the crackerjack national security team and Bush decided the solution to all of the problems is to invade Iraq.

Newsweek’s Fareed Zakaria, author of ‘The Post-American World,’ followed up on Woodward’s Bush-bashing:

I mean, George Bush came in at really the peak of American unipolarity. The world was his oyster, America had these monumental surpluses, everything seemed to be going its way. Now you have a situation where Iraq had delegitimized American political and military power, the financial crisis has delegitimized American economic power and, most importantly, this broad phenomena that has taken place, which is what I describe in my book as the rise of the rest, the rest of the world really feels empowered.

Dyson then concluded: " But I think he's [Obama’s] the perfect president for that, because obviously, without the kind of empire and imperialistic bluster of a Bush, but a person who forges connections among various constituencies, this team of rivals is not simply a domestic reality, it's a global one."

Later, Schieffer asked Mayer: "...what happens to Iraq?...Is it in fairly good shape now? Is it -- or -- will George Bush leave Iraq a better place than he found it?" Despite condemning the Bush Administration throughout the discussion, Mayer argued: "You know, I think one of the smart appointments that Obama has made is to keep Gates in at the Defense Department." Her reason: "So whatever happens in Iraq, at least it's going to be seen as some kind of continuity with the problems from before, and not a radical shift that will be blamed politically on Obama."

Schieffer gave the final word to Dyson: "...domestically, our hopefulness and our anticipation that the American future will be brighter. And black people have dealt with cash poor, credit and debt for a long time. To have a brother in the White House right now is a tremendous advantage right now. We can make a dollar out of 15 cents."