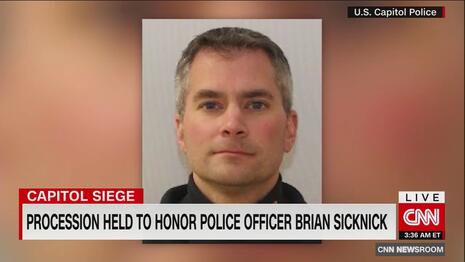 The New York Times has quietly placed “updates” in their articles about the Capitol Police officer whom they reported had been killed with a fire extinguisher by a violent pro-Trump mob, during January 6th’s riot.

At the top of their January 8 article, Times writers Marc Santora, Megan Specia and Mike Baker affixed this vague “update," (note: not "correction"): "UPDATE: New information has emerged regarding the death of the Capitol Police officer Brian Sicknick that questions the initial cause of his death provided by officials close to the Capitol Police."

A few paragraphs down they clarify:

The circumstances surrounding Mr. Sicknick's death were not immediately clear, and the Capitol Police said only that he had “passed away due to injuries sustained while on duty.”

In another piece also "updated" February 11, The Times further backed away from the claim they originally reported:

Investigators have found little evidence to back up the attack with the fire extinguisher as the cause of death, the official said. Instead, they increasingly suspect that a factor was Officer Sicknick being sprayed in the face by some sort of irritant, like mace or bear spray, the law enforcement official said.

Instead, investigators increasingly believe that a factor may have been an irritant such as mace or bear spray that was sprayed in the face of Mr. Sicknick, the law enforcement official said. The Capitol Police said in a statement that Officer Sicknick died from injuries sustained “while physically engaging with protesters.”

One month later, the exact cause of Officer Sicknick’s death has yet to be released.

Yet just 24 hours after his tragic death, The Times rushed to report unverified rumors he was beaten with a fire extinguisher by a violent Trump mob, as can be seen in these two false NYT stories, still on their website, but with the quietly added vague “update” below the salacious headlines, and pointed out by left-wing journalist Glenn Greenwald:

This big story published by the NYT about Sicknick’s death is simply false. The headline itself may be false, but the key events it purports to describe never happened. This caused virtually the media to spend a full month repeating this as fact.https://t.co/sydme7fE8b pic.twitter.com/81sdSOkEy4

This false scoop spread through the media and was even cited by the Democrat House impeachment managers in their case against Donald Trump.

What’s more, even the liberal "fact-checkers" can't get it right. USA Today repeated the fake news in a ridiculous and unrelated article “fact-checking" a meme about Democrats and Sicknick (which stands uncorrected as of 3:00 pm Eastern, February 16):

The Jan. 6 riot by a pro-Trump mob at the U.S. Capitol resulted in the loss of five lives, alongside at least 140 injured officers from the Metropolitan Police Department of the District of Columbia and the U.S. Capitol Police. Two other officers died by suicide in the weeks after the attack.

Among those who died was U.S. Capitol Police Officer Brian Sicknick. He was struck in the head by a fire extinguisher during the riots and died from his injuries the following day.

In a caption underneath a video at the top of the article, USA Today writer Adrienne Dunn repeated the lie: “Brian Sicknick, the officer who died after being struck by a fire extinguisher during the Jan.6 attack…”