Behar Freaks Out Over Barrett: Republicans In a ‘White Male Panic’ With ‘Reactionary Rush Limbaugh Ideas’ 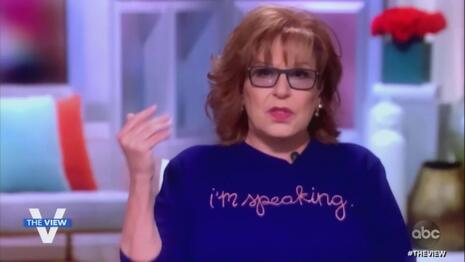 In the first segment, the hosts expressed their displeasure at the Barrett nomination. “Moderate” co-host Sara Haines complained about the court being imbalanced, which is rich considering the hosts all agreed last week they didn’t care if a President Joe Biden packed the court:

[I] think the Supreme Court is at its best when there are four people who are originalist, four living document and one swing vote. This is changing the balance to a 6-3 which is no balance at all, and I'm feeling overall just kind of hopeless because this is a lifetime assignment that we can't undo...

Whoopi Goldberg then sneered at a video clip of Senator Chuck Grassley (R-IA) quoting Democrats who had attacked Barrett for her faith in 2017. Co-host and faux Republican Ana Navarro justified the Democrats criticizing Barrett for her faith, but denied it was religious discrimination, calling it a “red herring” from the right that “does not exist” (click “expand”):

[R]epublicans are making an issue out of this to try to make her into a victim of religious persecution that does not exist. I mean, let's just understand that they are saying Democrats are coming at her for being a Catholic. Okay. Well, the democratic nominee is a devout Catholic who carries rosary beads in his pocket. The speaker of the house is a devout Catholic, and six out of the eight sitting judges right now, justices at the Supreme Court are or were raised Catholic, including those nominated by Democrats like Sonya Sotomayor. So this entire--She's being persecuted for being too Catholic narrative-- is a red herring by Republicans even though it is very much of a legitimate question to ask because we have the separation of church and state.

But Joy Behar freaked out that abortion was going to outlawed and gays were going to have to go back in the closet.

She exclaimed: “These guys are in a white panic, a male, white panic and they want to put the clock back!” She also freaked out about the notion of adding Republicans that would be radicalizing the country to the right: “This is what they would like to do to the country now, to put their reactionary Rush Limbaugh ideas into the country, and the country is not there!”

Not to be outdone in their anti-Catholic bigotry, Whoopi then lectured about how Barrett should leave her Catholic faith at the door when she rules on social issues to close the segment. When they came back from commercial, Behar outright defended Democrats packing the Supreme Court as true "justice":

Basically Moscow Mitch admits that he stacked the court, that he blocked Obama from getting any judges in for two years. He stopped the Merrick Garland nomination. Now he's pushing this coney woman through -- Barrett rather. And so if the Democrats feel that they want to put more justices in, they should do it, but I don't believe -- because it's not just about being vindictive. It's about justice. It's about -- they're totally justified in doing it because they need more people to get the ballots going, but I don't think that Joe Biden should show his hand now. Absolutely not. The base will be disappointed if he says he's not going to do it, and the rest of the country gets upset when he says he's going to do it,  on the other side. So why should---play a dead hand Joe, play a dead hand.

Co-host Sunny Hostin agreed, touting Democrats' talking points saying packing the courts was a Republican "red herring" and out of their "playbook."

Visit the Conservatives Fight Back Page and contact The View's advertisers Colgate and Secret.

WHOOPI GOLDBERG: Yeah. Well, you know, I agree with you. We cannot go backwards, and absolutely these questions are important because if you are going to make decisions about gay marriage, I need to know that you are making them as a judge and not as a Catholic judge. I need to know that you are making decisions about abortion as a judge, and not a Catholic judge because your idea that there is some freedom -- people don't have freedom of religion is ridiculous. There is no law in this country that says you have to believe -- you have to believe catholics or Jews or Zoro astrians, nothing. Nothing says you have to. What the problem is, is that if you use your religion as they are trying to do, to say, get rid of gay marriage, then you are violating my religious beliefs because I believe you have that freedom, and the separation of church and state would really make sure that these kinds of things don't happen, and I have a solution later on I'll tell you about, but we'll talk some more.

SUNNY HOSTIN: Sure. Sure. I mean, this is a Republican red herring argument as Joy mentioned because the Republicans are the ones that have been packing the courts. Obama had 108 judicial vacancies that he handed over to President Trump because Mitch McConnell had been -- refused to allow Obama's judicial nominees--blocking-- to go forward, and remember Merrick Garland. The Republicans, again, blocked that seat and thus packed the court now with not only two, but probably three supreme court justices. So this is really out of the Republican playbook, and so for the Republicans now to be questioning Joe Biden or any Democrat about, you know, court packing is really not the question. The question is how will the Democrats respond to the Republicans' abuse of power over the past, let's say decade. The other thing that I want to say is that, you know, court packing as, you know, I'm a member of the Supreme Court bar and have written briefs in front of the Supreme Court. I don't think it's appropriate, you know, the Supreme Court number of nine justices has not changed for 151 years. FDR tried to float the idea in 1937 to 15 justices to try to balance the court, and that was just, you know, roundly rejected.

HOSTIN: So I don't think there are going to be any more than nine justices and what we need to really do is then focus on things like legislation, like the Affordable Care Act, like legislation to perhaps protect gay marriage, legislation to protect a woman's choice if that is what your politics are, but the Supreme Court I think should remain at nine justices, and we leave it there because it's been 151 years. You don't play politics with the Supreme Court because, you know, I, like Ana, I'm an institutionalist, and I think there is something different about packing the Supreme Court as opposed to packing the bench.