Joy Behar Encourages Biden to Pull Absurd Stunt at Tonight’s Debate: 'That Will Freak [Trump] Out!' 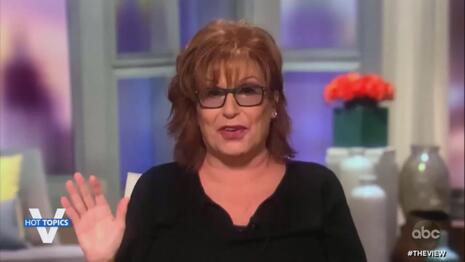 The hosts of The View joined ABC News correspondent Martha Raddatz to offer debate advice to Joe Biden, Tuesday morning. While the hosts were worried about Biden having to “fact-check” President Trump in tonight's debate, they all agreed that the Democrat didn’t have to do much but be the “adult” in the room since the president set the bar low for him. Joy Behar also encouraged Biden to play mind games with Trump to "freak him out."

“[I] just wonder if it's going to be up to Joe Biden to sort of push back on it and factually check him in real time since Chris Wallace isn't going to do it? I'm worried about the constant deluge of disinformation that I think we're going to hear from the president,” she fretted.

Raddatz, who moderated debates in the past two presidential elections, assured her there was a way Wallace could get around that: “To me, how you fact check is put those facts in your question,” she advised.

But co-host Joy Behar, like many in the media are doing today, tried to protect Biden by downplaying tonight’s debate as unimportant. She also schemed for Biden to “freak [Trump] out:”

Well, since, you know, the debate doesn't do much -- it hasn't done much since 1960 and JFK debated Nixon. That really turned the thing around. Hasn't done much since. People are pretty much entrenched in their beliefs in who they’re going to vote for. I say just ridicule the guy because He can't take it. Make a fool of him the way he likes to make a fool of people. If You call him out on his lies you'll be there for 26 hours, let's face it. You know, I say--I have a plan. Put President Obama in the front. That will freak him out! [laughter[ He still hasn't gotten over the [White House] Correspondents' Dinner when Obama made a joke about him. Or if Obama doesn’t want to come, bring an IRS auditor. [laughter[ You have to freak him out so he looks ridiculous in front of his base.

Behar added more silly debate advice later on: “When Chris Wallace asks a question, Joe Biden should say ‘now that is a $750 question!’" (referring to the NYT tax story.)

Raddatz also did her part downplaying Biden’s upcoming performance. She claimed it was Trump who had set low expectations for Biden, instead of the media, who has given him softer coverage than they did Clinton in 2016 and consistently excuse away his many “lid days” hiding from journalists:

What Biden really has to do is do a high jump over the low bar that President Trump has actually set for him. The sleepy Joe bar. He doesn’t have to just get over that--he really has to do a high jump. He really  has to let the country know what his plan is and how he would engage America and bring America together again.

Whoopi Goldberg agreed saying Biden “doesn’t have to sell himself to us,” because he was Vice President for eight years and “people know where’s coming from.” She added all he had to do was be the “adult” in the room.

“I’m sure he’ll have answers like that. Exactly what he'll try to do there I imagine,” Raddatz agreed.

Considering how quickly the Biden campaign took up the media’s advice on condemning violence last month, it’ll be interesting to see if the candidate parrots what the media tells him to say tonight as well.

Puffs and Finish sponsor The View. You can contact their advertisers at the Conservatives Fight Back page here.