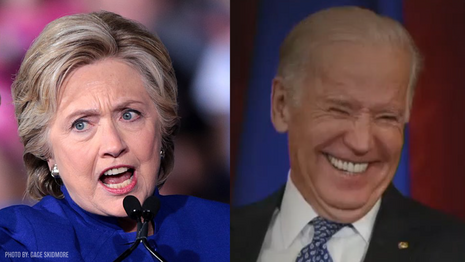 Not only is Biden facing much less negative coverage than the President, he has received only one-sixth as much negative coverage as former Secretary of State Hillary Clinton received during the early weeks of the 2016 general election when she was Trump’s opponent. Instead of criticizing Biden for his “hiding in the basement” approach to the campaign, the networks are rewarding it by focusing nearly all of their negative scrutiny on Trump.

[There’s a full description of our methodology at the end of this article.]

In 2016, the networks spent less time on candidate Clinton (262 minutes, or about two-thirds of Trump’s total airtime), and there were many fewer negative statements about that year’s Democratic nominee compared to Trump. But Clinton still faced a decent amount of scrutiny: 90 negative statements vs. 17 positive statements, for an overall spin of 84% negative). 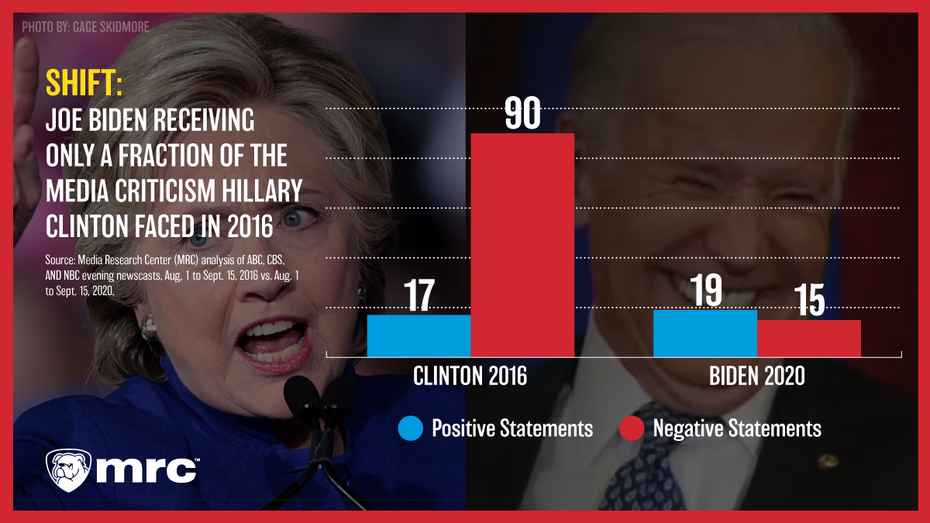 This year, Biden has received less airtime than Clinton garnered four years ago, and far less attention than his GOP opponent: just 148 minutes during the period we studied, which included the virtual Democratic National Convention. (Four years ago, both parties held their conventions in July, before the study period.)

Compared to Trump this year, the disparity is enormous: the 389 negative statements about the President are 25 times more than the 15 we recorded about Biden.

One example of the disparity: From August 1 through September 15 four years ago, the networks spent 50 minutes, 25 seconds on questions about the (then) 68-year-old Hillary Clinton’s age and health; this year, those broadcasts have devoted just five minutes, 23 seconds — barely one-tenth as much — to discussing the 77-year-old Joe Biden’s capabilities.

That’s still more time given to the Trump campaign’s main talking point, that a potential Biden administration would either promote radical left-wing policies, or be ineffectual at constraining the socialist wing of the Democratic Party. Evening news viewers heard only three minutes, 15 seconds on that topic, and never explored it as a serious question.

So what’s next? From September 16 through Election Day 2016, Clinton’s press improved significantly (from 84% negative to 62% negative), while Trump’s barely changed (from 90% negative to 88% negative), with nearly all of the scrutiny going to the Republican.

Given that history, it seems unlikely that the networks will suddenly begin to seriously scrutinize Joe Biden during the final weeks of this year’s campaign. After all, they’ve had plenty of opportunities to do it this year, and they’ve chosen not to do so.

METHODOLOGY: For this report, MRC analysts reviewed every mention of President Trump and former Vice President Biden from August 1 through September 15, including weekends, on ABC’s World News Tonight, the CBS Evening News and NBC Nightly News. To determine the spin of news coverage, our analysts tallied all explicitly evaluative statements about Trump or Biden from either reporters, anchors or non-partisan sources such as experts or voters. Evaluations from partisan sources, as well as neutral statements, were not included.