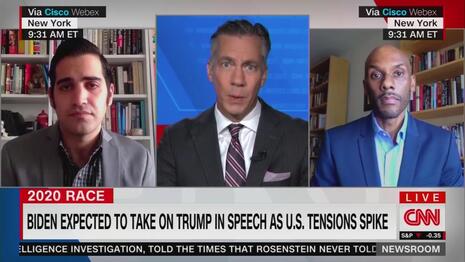 As soon as the media realized that ignoring the violent left-wing riots destroying cities across America wasn’t an effective strategy for Democrats to win in November, they’ve immediately pivoted to helping Joe Biden blame President Trump for the violence. On Monday, CNN political commentator Keith Boykin even claimed Trump supporters, not Antifa or Black Lives Matter agitators, were the ones “causing mayhem” in the streets.

On this morning's CNN Newsroom, host and former Obama official Jim Sciutto wondered if Democrats should “be concerned” about Trump highlighting the violence in Kenosha and Portland. He asked Boykin if that could matter to voters in swing states:

Keith, we've heard of democratic strategists, people close to Biden, concerned about the efficacy of a law enforcement message for the president as people see violence in the streets of Kenosha and Portland, et cetera. And again we don't want to overplay or underplay the violence how extensive it is, but should Democrats be concerned about that particularly in a swing state like Wisconsin?

Boykin absurdly claimed that Biden’s been the one who’s been condemning the riots, while Trump hasn’t. He also tried to argue that Trump supporters were the ones out there causing violence in Democrat-run cities:

No, I don't think they should be terribly concerned about this, because if you look at what's happening, Joe Biden is the one who repeatedly condemned the violence and called for peaceful demonstrations. Donald Trump has not done that. It's the Trump supporters who are out here causing mayhem. It’s the Trump supporter in Kenosha who killed two people just last week. It was Trump supporter, Cesar Sayoc who was sending pipe bombs to CNN, it was a Trump supporter out there chanting "White power" and the president is retweeting that. So when they look at the messages and see the Biden campaign message versus the Trump campaign message, they know that Donald Trump is the one instigating fear instead of creating calm.

The former Clinton aide and CNN will never give the president credit for condemning violence, even though he’s been doing that since the riots started back in May. Meanwhile Joe Biden, who only offered very minimal, tepid criticism of the riots up until this past week, is the one who’s been “repeatedly condemning the violence?” That’s some fantasy. Boykin’s other cheap shots don’t hold much weight when you consider these examples he conveniently left out:

This past Saturday, a proud left-wing Antifa member allegedly shot and killed a man in Portland. A Black Lives Matter mob surrounded and attacked Senator Rand Paul (R-KY) and wife Kelley, among others, as they were leaving the White House during last week’s Republican National Convention.

Looters killed retired police officer David Dorn as he was protecting his friend’s shop. Seattle’s CHAZ/CHOP police free zone ended with three people shot, and one of them killed, (not to mention the rapes, assaults and other violent crimes). There have been numerous other people killed or assaulted in the past three+ months at these Black Lives Matter protests. And since Boykin went back a few years to blame Trump for a deranged person sending mail bombs to CNN, maybe he should’ve also brought up the crazed Bernie Sanders supporter who tried to assassinate Rep. Steve Scalise in 2017, too.

But Sciutto just nodded and agreed with Boykin’s cherry-picked analysis. “Yeah, our broadcast was interrupted by the arrival of one of the letter bombs a couple years ago,” he stated.

If this “Trump is instigating violence” message sounds familiar, it should because it’s the exact same message the media used right before the 2018 midterms.

CNN working hand-in-hand with the DNC was paid for by Carshield and Amazon Prime. You can tell CNN’s advertisers how you feel here.