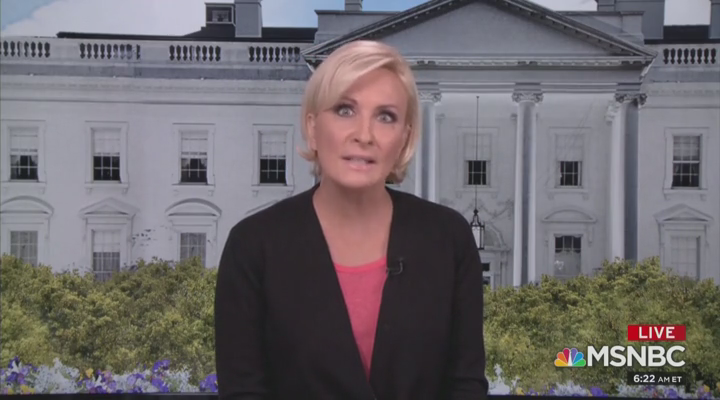 In the closing days before the midterm elections the liberal media went mad in their attacks on the GOP and especially President Donald Trump as they blamed his “racist” and violent rhetoric for the crazed actions of both the mail bomber and synagogue shooter.

On CNN, a correspondent for GQ raged: “This President has radicalized so many more people than ISIS ever did.”

On MSNBC Mika Brzezinski dropped all pretense of objectivity as she warned the only way to stop the madness of the “racist, heartless, soulless” president was to “vote all ‘D.’” And New York Times columnist Thomas Friedman told his readers “there is only one thing to do in this midterm election and that is vote for a Democrat.”

The following are the worst attacks on Trump and the GOP from their midterm election coverage:

“The rhetoric of this racist, heartless, soulless man will lead to more violence....He doesn’t care. He’s got no sense of decency, no sense of duty, and no limits...No limits of what he’s capable of doing to stave off any humiliation for himself. The humiliation that his desperate actions suggest is that he knows what’s coming next Tuesday....If you want a slight check on this man and his unrelenting race to the finish here to make sure he can continue destroying this country, you might want to vote all ‘D,’ even if it’s not your party this time around.”
— Co-host Mika Brzezinski on MSNBC’s Morning Joe, November 1.

It’s All About Trump’s Racism

“It’s an interesting contrast, you know, when you watch the way the President is sort of – his closing message. Oprah, what she did there, very much trying to – sort of determined optimism, I guess, if you will – trying to be the contrast, better angels versus darker demons, things like that.”
— NBC Meet the Press host Chuck Todd discussing Oprah Winfrey stump speech for Georgia Democratic gubernatorial candidate Stacey Abrams as aired on MSNBC’s Andrea Mitchell Reports, November 1.

Is This Elevating the Tone of the Conversation?

“This President has radicalized so many more people than ISIS ever did. I mean, the way he talks....The way he winks and nods to these groups. The way he says, I know I’m not supposed to say it, but I’m a nationalist. The way that he hems and haws when he has to condemn these people and kind of gritting his teeth, kind of says, fine, okay, I condemn this.”
— GQ correspondent Julia Ioffe on CNN’s The Lead, October 29.

“Some people see a connection between the President’s rhetoric about invasions and things like that and the horrors of last week, by the horrors I mean the bombs being dropped in the media doorstep, I’m talking about two African-American guys being shot dead, I’m talking about the attack on that synagogue in Pittsburgh. The atmospherics, how much is this President responsible for the atmospherics?”
— Host Chris Matthews question to Democratic Senate candidate Beto O’Rourke on MSNBC’s Hardball, October 30.

“When he [Donald Trump] invokes this question of immigration and you say it plays with the Republican base, it’s all about a certain conception of whiteness. This idea of whiteness that has led to 11 people being dead in Pittsburgh. So here we are after the carnage. And this man, this moral monster is playing to those base instincts....So it may play politically and if it does it shows that the country is profoundly racist.”
— MSNBC contributor and Princeton professor Eddie Glaude on MSNBC Live, October 30.

“[Donald Trump] seems to be zeroing in on the two pillars of the media, continuing his vitriolic attacks against the media, and migrants, continuing to, in fact, ratchet up the language about them and frankly....using some of the same language that the mass murderer at the synagogue used in terms of invaders and invasion.”
— Correspondent Alisyn Camerota on CNN Newsroom, October 31.

Host Brian Stelter: “The issue is dehumanizing other people because you think they’re on a different side than you. It is one thing to criticize coverage, to complain about bias. It’s another thing to suggest a figure is evil or a network is evil because you don’t agree with what they do.” ...
Host Chris Cuomo: “So now he’s in a box because now he saying we need civility when he goes out of his way to be uncivil. So now he’s going to a rally tonight where the rally he’s been at for the last few days, he’s been calling for hatred toward exactly the groups and individuals that were just targeted.”
— Discussion about letter bomber on CNN Newsroom, October 24.

“The biggest terror threat in this country is white men, most of them radicalized to the right, and we have to start doing something about them. There is no travel ban on them. There is no ban on – you know, they had the Muslim ban. There is no white guy ban. So what do we do about that?”
— Host Don Lemon on CNN’s Cuomo Prime Time, October 29.

“Hate Is On The Ballot”

“All of these hate crimes seem clearly linked to the climate of paranoia and racism deliberately fostered by Donald Trump and his allies in Congress and the media. Killing black people is an old American tradition, but it is experiencing a revival in the Trump era....It’s also the barely veiled subtext of the manufactured hysteria over the caravan of would-be migrants from Central America....There’s a straight line from Fox News coverage of the caravan to the Tree of Life [synagogue] massacre....The fact is that one side of the political spectrum is peddling hatred, while the other isn’t. And refusing to point that out for fear of sounding partisan is, in effect, lending aid and comfort to the people poisoning our politics. Yes, hate is on the ballot next week.”
— Columnist Paul Krugman in October 29 New York Times article “Hate Is on the Ballot Next Week”

Conservatives Have “Blood on Their Hands”

“This whole caravan in the last week of the election, is a giant lie. This is Trump’s Reichstag fire....Kellyanne Conway despicably today goes on national television; she said this shooter’s motives was because there’s an anti-religious sentiment. No, ma’am. The propaganda industry that she commands with the vile President that she serves, abetted by Mark Levin, and Rush Limbaugh, and Breitbart, and NewsBusters, and Judicial Watch, and all the rest of them, have blood on their hands for the incitements that they have made that have triggered and radicalized these crazy people.”
— MSNBC political analyst Steve Schmidt on MSNBC’s All In, October 29.

Blame Trump and His “Not Minimally Human Behavior” for Mail Bomber

“The president is obviously a racist, obviously a demagogue, condones anti-semitism, stokes up nationalist hatred....He goes out to a rally on Friday night and participates happily, smiling in a ‘lock her up’ chant about Hillary Clinton who just had a bomb sent to her in the mail. He got on Twitter the next day and was tweeting about Tom Steyer who just had a bomb sent to him in the mail. It’s not a question of whether it’s presidential behavior or not, it’s not minimally human behavior in these circumstances and the effect that it has on his followers, on his devotees, on his base is of course corrosive and dangerous.”
— John Heilemann on MSNBC’s Morning Joe, October 29.

“And yet the hatred continues uninterrupted and this guy – I just – I can’t even call him president -- this demagogue, this nationalist, he refused to even try to temper his crowds. Refused to even call the former presidents and secretaries of states and CIA directors to offer condolences and assurances that he was going to do his job as president to protect all Americans.”
— Co-host Joe Scarborough on MSNBC’s Morning Joe, October 29.

“This has always been a problem with this President. He has always shown a sympathy or dismissiveness towards terrorism. He is a terrorist sympathizer. I mean given the way he responded to what happened in Charlottesville, given how he responded to [Jamal] Khashoggi, given how he puts what happened today in context of how it affects the midterm elections, we don’t have leadership in this country when it comes to domestic terrorism. This president foments it as much as he is occasionally forced to speak against it.”
— MSNBC contributor and The Root editor Jason Johnson on MSNBC’s Deadline White House, October 26.

Only One Solution: Vote Democrat

“We have a president without shame. He is backed by a party without spine. And they are amplified by a network without integrity. And when you face that kind of triumvirate, there is only one thing to do, and that is to get a lever of power to change it, okay? So there is only one thing to do in this mid-term election and that is vote for a Democrat. I don’t have any other solution in the short term.”
— New York Times columnist Thomas Friedman on Fareed Zakaria GPS, October 28.

Trump “Brings Out the Worst In Us”

“[Donald Trump] needs to take responsibility for having addressed our fears and exacerbated our fears instead of inspiring our hopes....Right now, led by the President, we are in an overly passionate era. We’re in an emotional time. His language, which is part showmanship and part incendiary, we now have proof positive that it creates a climate where the worst can happen. And it brings out the worst in us.”
— Presidential historian/former Newsweek editor Jon Meacham on MSNBC Live With Veslshi & Ruhle, October 26.

Change The Rhetoric, Unless It’s Anti-Trump

“How surprised should we be? This is at least the fourth mass killing in America using an AR-15 since the Las Vegas massacre just over a year ago, the third mass shooting in a house of worship in the last three years. Across social media hate speech and anti-Semitism are rampant and on the rise. All against the backdrop of the ugliest political climate in modern times. At the center, an unapologetically incendiary President untrammeled by traditional norms of civility.”
— Host George Stephanopoulos on ABC’s This Week, October 28.

“If you want to ask me what makes me the most depressed about my job it’s covering the [Donald Trump] rallies....In many ways the danger is not what Trump is doing to America, the danger is how America is changing under Trump.”
— CNN correspondent Jim Acosta at Citizen By CNN forum in New York City, October 22.

Vote Democrat Or It’s The End of Democracy

Serious Journalist Stunned By Popularity of Candidate at His Own Rally

Correspondent Paula Faris: “You can’t go ten feet without an interruption from a Beto-backer.”
Beto O’Rourke to supporter: “I love you too! Thank you all.”
Faris: “You’re a rock star!”
— ABC’s This Week, October 21.

“Elected Republicans in America – from the President on down – obviously fear democracy. They fear the will of the voters and so they try to prevent voters from voting. That is their top campaign strategy: stop democracy....It feels like we have never seen anything like this. We have never seen it this bad, since the early 1960s, before the Voting Rights Act.”
— Host Lawrence O’Donnell in segment about Dodge City, Kansas polling place being relocated as aired on MSNBC’s The Last Word, October 19.