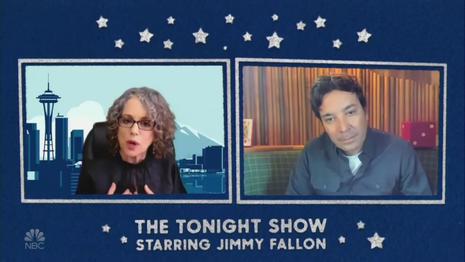 To the media, it's perfectly fine if you make sweeping judgements on an entire race solely based on the color of their skin, as long as you’re a liberal. Just look how much free PR and airtime the media's giving to “White Fragility” author Robin DiAngelo and her “antiracist” comrades the past two weeks. DiAngelo was on The Tonight Show Wednesday, where she made host Jimmy Fallon very uncomfortable, as she reprimanded him about how every white person has to acknowledge their inherent racism.

Fallon let the author and lecturer do most of the talking. After he praised her book for being “sold out” everywhere and on all the best-seller lists for two years now, he pointed out how her book was opening up a dialogue between whites and blacks. But DiAngelo actually just wanted to bash white people as being unable to take criticism when it comes to race.

She whined that white people are just too “difficult” and “a-holes” to hear any constructive criticism on their own racism from black people:

DIANGELO: And you know, just take that in I just want all the white people to just take that in. Revolutionary that we would receive the feedback with grace, reflect and seek to change our behavior. That's how difficult we are.

DIANGELO: That's how big of a-holes we are.

DIANGELO: But on the other hand, you know, that's not a very tall order. Really? That's a revolution but we can't get there from the current paradigm that says only mean people who want to hurt others based on race ever could do so. So we just have to change what we understand it means to perpetrate racism.

Fallon then asked if she had come up with the term “white fragility” and what did it mean “exactly.” DiAngelo proudly acknowledged the incendiary term was her own creation. It meant that whites who don’t think they are racist are actually snowflakes who “melt down in defensiveness and umbrage” at the slightest criticism, and by doing that they “protect the racial status quo.”

Fallon asked her his next question, looking pained: “Can you help me in a way, I wanna ask a question, like how does one say -- how does a white person say, that they're ‘not racist’?

Considering how Fallon apologized about a month ago for wearing blackface while impersonating fellow comedian Chris Rock in a Saturday Night Live skit years ago, this question almost seemed like an admission. But DiAngelo reprimanded him about how white people should never say they're 'not racist' because it is an impossibility:

Well, white people often say, I'm not racist. I know you have. I have done things in my life I recognize as racist today. I would not do them again. They were neither intentional or even conscious, and yet they wounded other people nonetheless. I think white people should remove that phrase from their vocabulary, "I'm not racist. It's not -- trust me, it's not convincing to black people. As long as we define racism as individual, intentional acts of meanness, then I would agree with you that most white people are not racist but when I'm talking about the racism that I have, the racism that you have, it's the result of living in a society in which racism is the foundation we all absorb it we all absorb it there's no way we could exempt ourselves from it.

Fallon wrapped up the interview asking the liberal author to tell white people where they can “start” in acknowledging their inherent racism. The author claimed whites needed to ask themselves, “What does it mean to be white?” and “How has being white shaped my life and how is that manifesting in my life?” and the magical answers to these vague questions will be the end to a problem that's plagued mankind since the beginning.