In the wake of CBS laying out the red carpet for a discussion of Robin di Angelo's notion of "white fragility" -- baldly asserting that all whites are pretty much racist, and denying it only makes it more obvious -- CNN.com offered the same one-sided welcome, led by medical producer Sandee LaMotte. It began:

If you're a white person in America, social justice educator Robin DiAngelo has a message for you: You're a racist, pure and simple, and without a lifetime of conscious effort you always will be.

You just can't help it, you see, because you've been swaddled in the cocoon of white privilege since you came sputtering out of your mother's womb, protesting the indignity of it all.

Overgeneralization -- not "facts first." This....is CNN.
LaMotte added to the hype: "What started as an essay written in 2011 on racial and social injustice has become an international sensation, flying off the internet shelves into the homes of those horrified by recent events." White Fragility is currently #1 on Amazon. LaMotte's questions are all publicist softballs. There is no pushback on the You're All Racist line. Here's a sampling: 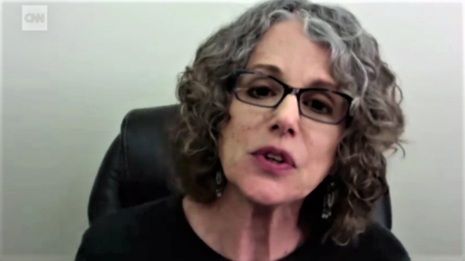 Q: Is this a "Me Too" moment for racial equality or is the conversation going to fizzle and fade as it's done in the past?
Q: The theme of your book White Fragility is how white people are perpetuating racism by being too fragile to discuss the subject openly and honestly. How can white people be fragile If we have white privilege?
Q: If someone was to say to you, "I don't understand how I have been shaped by my whiteness," what would you tell them?
Q: You write about the "pillars" which support white fragility. What are they?
Q: Why is a book on racism written by a white woman flying off the shelves and resonating with people at this time?
Q: There's much to be done. What are the key things white people can do -- right now -- to begin to make a more permanent change?

Even the liberal whites are racist. They're apparently the worst kind! "You say in your book that white progressives can be more difficult than outright racists when it comes to conversations about race. I believe you say many black people see it as racism 'by a thousand cuts.'"
You can't claim all whites are unconciously racist without hammering the liberals, too. And they'll be the most willing to rush to prove they are not....like giving "white fragility" a completely free pass on CNN.com.
PS: I saw this first on the home page of MSN.com.