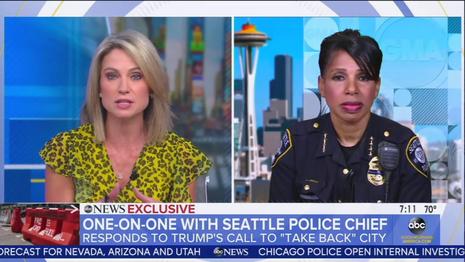 ABC’s interview with Seattle police chief Carmen Best Friday morning seemed to purposefully exclude the police chief’s comments blasting city officials in the Democrat-led city, for forcing police to leave and allow activists to set up their own experiment in anarchy. Instead of playing those comments, Good Morning America co-anchor Amy Robach invited the police chief to attack President Trump, instead.

Leading into the interview was yet another report from reporter Matt Gutman downplaying the “autonomous zone” extremists have set up in the East police precinct of Seattle. He gushed, “[E]verybody is lining up here to try to protect the precinct trying to prevent police from coming back,” before asserting that police have “abandoned” the precinct. Gutman ended his report by again leaving out some of the more radical demands these “progressive” activists want, such as a return to segregation.

Further showcasing their cognitive dissonance, GMA had a full report complaining about police not doing anything to stop looting in Chicago right before this. Amy Robach then spoke with Seattle chief of police, Carmen Best.

In a video address to Seattle officers yesterday, Best had directly blamed city officials caving to protesters for police being forced to leave the precinct. She said the following:

You should know leaving the precinct was not my decision. You fought for days to protect it. I asked you to stand on that line. Day in and day out, to be pelted with projectiles, to be screamed at, threatened and in some cases hurt. Then to have a change of course nearly two weeks in, it seems like an insult to you and our community. Ultimately the city had other plans for the building and relented to severe public pressure. I’m angry about how this all came about. I understand that my comments in this message may be leaked to the public, but I’m not concerned about that.

Robach clearly saw the video, because she asked with her first question, “You have said, this was not your decision to abandon an entire precinct and you’re angry about how it happened. How did this happen?”

Well, Best had revealed this answer in that leaked video. But Robach didn’t call them out, and neither did Best, who tried to not be political throughout the interview. She did insist that this was not her decision but ABC’s chyron still read, “Police chief on ‘autonomous zone’ and ‘decision’ to abandon precinct.”

Robach did, however, try to goad the police chief to attack Trump instead with her next question: “President Trump is blasting your mayor and your governor. He is tweeting that domestic terrorists have taken over Seattle. Is that an accurate depiction of what's happening in your city?”

Best didn’t take the bait. She responded, “Well, we definitely have some folks who have posted themselves outside the precinct in about a four-block radius around it. But, you know, I don't get involved in the politics.” She added that because of this takeover, police haven’t been able to respond to violent crime in a timely fashion. Robach asked if this was leading to a “dangerous situation” with her next question.

Best agreed with that assessment and even shot down suggestions from Democrats, like Seattle’s own mayor, saying that these extremists were just engaging their constitutional rights: “While I support First Amendment free speech, this is not that,” Best told Robach.

Robach ended the interview with one more question sympathetic to extremists: “Do you understand the anger that these protesters have against police right now, and how do you resolve that?

GMA has spent all week promoting the left’s radical agenda to “defund the police.”

AMY ROBACH: You have said, this was not your decision to abandon an entire precinct and you’re angry about how it happened. How did this happen?

CARMEN BEST: Good morning, Amy. And thank you for having me. I am very angry about the situation that we have and at this point we just want to make sure it gets resolved. We did not for clarification abandon the precinct. But we did have to remove some personnel for a short period of time and then it became unsafe. You've seen the pictures and photos of what's going on for us to safely put our officers back in there. We're currently working to get our officers back into the facility. We think it's really important that we have police presence there and that we're able to continue to do our work so, again, we did not abandon the precinct.

ROBACH: President Trump is blasting your mayor and your governor. He is tweeting that domestic terrorists have taken over Seattle. Is that an accurate depiction of what's happening in your city?

BEST: Well, we definitely have some folks who have posted themselves outside the precinct in about a four-block radius around it. But, you know, I don't get involved in the politics. I let the politicians do all that. I'm just concerned about making sure that I'm able to get my officers back into the precinct so that they can respond to calls for service. We need to have officers responding to calls in a timely fashion and with the occupation, we're not able to do so in a timely way. It's taking us three times the amount of time for priority one calls in the area and almost an hour for priority two calls.

ROBACH: Well that leads me to my next question because protesters are declaring this an autonomous zone free of police. Do you consider it to be a dangerous situation and, if so, how?

BEST: Well, of course, I think that officers need to be able to function and perform from the precinct. It makes only good sense that we  are able to do our job effectively and this, while I support First Amendment free speech, this is not that and we need to make sure we are working to get officers back in and to peaceably resolve any of the issues that are outstanding at this time

ROBACH: Your department as you know has come under fire as have so many departments around this country for using excessive force. You and the mayor have apologized for using tear gas against protesters peacefully protesting. Do you understand the anger that these protesters have against police right now, and how do you resolve that?

BEST: Yeah, well, we know people -- they made it clear they are concerned about the use of tear gas or CS and so we are really limiting its use and we had suspended the use of it for 30 days while we evaluate where we are, what makes sense and the only way that it will be used, the only exemption, that is, if it's a life safety situation and then the determination can be made only with my approval. So we want to make sure that we are responsive to the community concerns and community needs and so it's really important that we're listening and that we're having a dialogue and we’re figuring out what we can do to both keep people safe but make sure we incorporate the community expectations and modulate our response and make sure that its reasonable and necessary and proportionate to what we’re addressing.