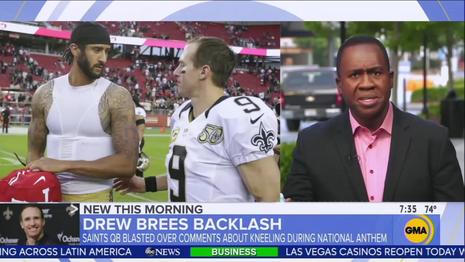 NFL quarterback for the New Orleans Saints Drew Brees came under immediate fire from other athletes and the media yesterday after saying in an interview that players shouldn’t “disrespect” the American flag by protesting during the National Anthem. This statement was treated like heresy by the networks this morning, who hyped how “controversial” his comments were, as the athlete apologized this morning.

Here is what Brees said to Yahoo! Finance on Wednesday, after being asked what he thinks about NFL players kneeling again when the season starts:

“I will never agree with anybody disrespecting the flag of the United States of America or our country,” he stated adding that when he sees the flag, he envisions his “two grandfathers who fought for this country in WWII” as well as those who risked their lives for the Civil Rights movement in the 1960s. He added that standing and respecting the flag and anthem shows “unity” and a commitment to make this country a better place.

On Good Morning America Thursday, co-anchor T.J. Holmes hyped the “backlash” and “controversy” of Brees's comments “coming in the wake of the protests over the killing of George Floyd” and while he works in an industry where “70% of the athletes are black.”

Showing his disdain, Holmes told ABC correspondent Steve Osunsami that Brees didn’t seem to get it:

This in some way, though, makes the point of the protesters. We've been trying to be heard for years. Silently kneeling something what Kaepernick was doing, nobody was listening, so now, Steve, the protesters have gone out in the streets and have gotten louder because Drew Brees has worked with these players for years and he still doesn't seem to get the point.

Osunsami agreed saying these riots “are what you get in response” to what happened to Kaepernick and it “wasn’t unreasonable” to expect more kneeling protests this Fall. Osunsami touted how some fans were now calling for Brees to retire.

While finding pro-flag and pro-unity comments “controversial,” ABC cheered on celebrities’ radical calls to defund the police as using their voice for positive change, later on GMA.

ABC and NBC also quoted several NFL and NBA athletes condemning Brees. The backlash prompted Brees to issue an apology later this morning for his “insensitive remarks” that “missed the mark” after GMA’s report.

CBS This Morning similarly hyped Brees’s “controversial comments on the protests,” and brought on former NFL player Emmanuel Acho to lecture Brees on how he needs to “learn before he speaks” and not tell the “oppressed” when they can protest. Acho didn’t get any pushback from anchor Anthony Mason for claiming that millionaire athletes are “oppressed” or his claim that kneeling during the national anthem has nothing to do with the American flag.

Brees comments were no different than ones he made in years past about players kneeling during the anthem, yet now if you show honor the American flag and all it stands for, you might as well be wearing a klansman hood to the media.