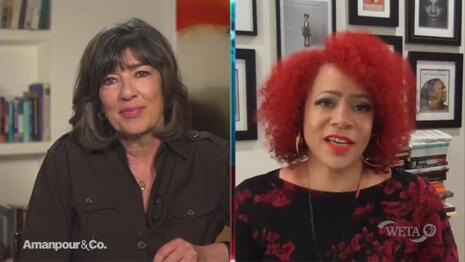 The New York Times Magazine’s ahistorical “1619 Project” author has been all over media outlets this week commenting on the riots and protests over the death of George Floyd. On Tuesday, she made some disturbing arguments justifying violence, to PBS’s Christiane Amanpour and on CBS News Live. Amanpour actually responded as if she agreed with the NYT journalist condoning looting and property damage.

While she was on CBS News Live, the NYT’s Nikole Hannah-Jones argued that “destroying property” was “not violence.” She even claimed it was “immoral” to call it so. She also claimed that destroying property was justified. She said these inflammatory things in response to CBS News host Anne Marie-Green inviting her to give the “full context” on how we talk about the rioting and looting going on.

“I think we need to be very careful with our language,” Jones warned before adding that it was “disturbing” to see property damage and looting, but they shouldn’t be classified as violent:

"Violence is when an agent of the state kneels on a man's neck until all of the life is leached out of his body. Destroying property, which can be replaced, is not violence. To use the same language to describe those two things is not moral" -@nhannahjones on CBSN pic.twitter.com/GGteXRFwAr

Destroying property which can be replaced is not violence. And to put those things -- to use the exact same language to describe those two things, I think really is not moral to do that. So, yes, I think any reasonable person would say we shouldn’t be destroying other people’s property. But these are not reasonable times. These are people who have testified against police violence again and again and again, year after year, and still we can have videos of law enforcement and witnesses nonchalantly taking the life of -- of man for the alleged crime of passing a fake $20 bill. So when we have people who say that people should respect the law, they're not respecting the law because the law is not respecting them. You can’t say that -- that regular citizens should play by all the rules when agents of the state clearly are not.

I guess that means burning down someone’s house or business is considered a “peaceful” activity to the NYT journalist.

We're 13% minority in majority white country. We are descendants of people that were enslaved in this country. So ultimately our protest is only as successful as we can convince white Americans to actually comply with the Constitution and treat black Americans as full citizens. I think I would not describe looting as violence, loot is property damage, but it is not violence. I would actually like to Martin Luther King's own words. He wrote a letter to the American Psychological Association in September of 1967. What he said is, ‘Looting comes from most abrazed and deprived negro and allows them to take hold of consumer goods with the ease of white man does by using his purse. Often the negro doesn't want or need what he takes, he wants the experience of taking. Negroes have taken crimes but they're derivative crimes and they are born of the greater crime of vaster white society. So when we ask negroes to comply by the law, let us also demand that the white man abide by the laws in the ghettos as well.’ So I think we need to have to have some perspective on what exactly we’re seeing when we call that violence and looting.

Amanpour was enthralled with Jones’ justifying violence as essentially, racial payback for hundreds of years of oppression.

“I think it's so interesting to hear you say this. Really made me sit up when Deray [McKesson] said it. This is is how it's been framed,” she gushed.

After praising the 1619 Project author for winning a Pulitzer Prize, the PBS journalist then asked Jones to explain why black people were “excluded from the social contract” so they don’t have to abide by the rules of society, in not looting.

Jones explained that the country has always let black communities be “looted” so it is a “symbolic taking” when black people steal back. Again, Amanpour didn't criticize this alarming argument:

AMANPOUR: You said among other things, people left out of the social contract find no need to adhere to it. And somebody checked you on that, said not left out, excluded from the social contract. And you kind of agreed. You agreed with being term checked so to speak on that.

JONES: Absolutely. I mean this is the thing, you are asking people whose communities have been looted for decades, would don't have proper schools, don't have proper amenities, who have been -- when we see someone killed by the police, that's the worst manifestation of police violence but doesn't get to the daily police violence that doesn't end in death, the daily degradation that black Americans face. The fact that these communities are preyed upon by predatory lenders. It goes on and on. When you talk about someone taking something from a big box main store, it's symbolic. One pair of shoes that you've stolen from the Foot Locker is not going to change your life, but it is a symbolic taking. So when we think about what the social contract was, and who created it, it is that if you follow the rules, if you do the right thing, you will be able to access an equal society. That's never been true for black Americans and particularly for lowest income, most segregated black Americans. So you cannot regularly not include them in the social contract, regularly violate the promises this country makes to Americans and then at this moment in time say you should abide by the laws and rules of our country because that’s right thing to do. There's no reason to expect that people who regularly have been left out will comply with this right now.