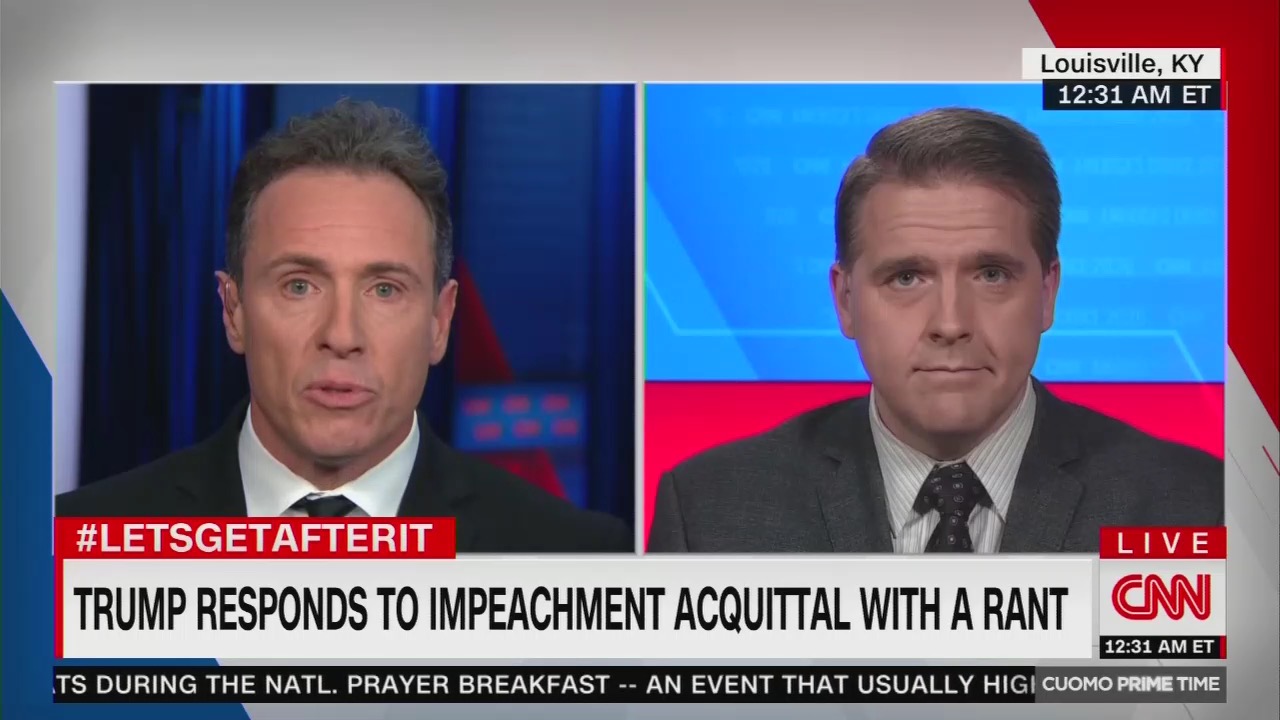 Cuomo began demanding Jennings criticize Trump for calling out Mitt Romney and Nancy Pelosi at the National Prayer Breakfast, that morning. “[Y]ou don't want to behave that way, especially at a place that is about prayer and unity through faith. Right?” he condescended to Jennings.

Jennings admitted he wouldn’t have done that, saying he would’ve brought up abortion instead, but he understood how the president could be angry at this three-year-long process to undo his 2016 election. Cuomo dismissed the abortion part and sneered that the only “truth” Jennings told was that he, and other conservative Trump supporters were puppets for the president:

Now, the last part is the truth. You say you wouldn't do it. You say it's not how it should be. But then you say you'll give him a break. And you know what, Scott? You and the people in your party who are in congress do that every time, and that's why he says, I could shoot somebody in the middle of fifth avenue and my supporters wouldn't leave. How does that make you feel about somebody as a person of faith, that this president mocks people who use their faith to guide their behavior, who said that Romney used his faith as a crutch? You and I both know as flawed believers that's exactly what faith is supposed to be. But you all excuse it because he's in power, and you want him to stay there. Is that okay?

That’s when Jennings brought up Pete Buttigieg defending his radical abortion stance on The View, Thursday. Suddenly Cuomo became a spokesman for Buttigieg, claiming that Jennings was lying about the Democrats’ extreme abortion views:

JENNINGS: Yeah, I do want him to stay in power. Because the alternative -- at the same time he was making that speech this morning, Mayor Pete Buttigieg who I guess is now potentially the front runner for the democratic nomination for president was over on "The View" talking about abortion on demand, okaying partial birth abortion, abortion any time and anyplace. So if you're a Christian, if you're a conservative who believes in those values and your choices are Donald Trump who sometimes says things you don't like and you wouldn't do it that way, versus rule by a party that would allow abortion on demand and install federal judges who would allow it, this is no choice at all. You go with, you go with your gut on policy and your morals on policy.

JENNINGS: It's not a lie.

CUOMO:[A]nd then you’re going to lie. I saw the clip to prepare for this segment, Scott. He did not say abortion on demand whenever you want it wherever you want it. Let me ask you something. How do you reconcile --

JENNINGS: He did. I am not lying to you, Chris Cuomo.

CUOMO: He didn't, Scott and we both know it. I'm not -- look, it's a lie to say that Pete Buttiegieg or anybody in the democratic party who is running for president wants to have abortion whenever you want it at any time, let's pull out the baby and let's look at it and throw it in the garbage. You guys say this and you say it for the ugliest of reasons...That's good, that WWJD, it's good for us. I know we’re supposed to be secular but I take comfort in it. You pass off something you know is not true. You know no Democrat says you can get an abortion any time before the kid goes to kindergarten. Why scare people like that?

After more back and forth defending Buttigieg, Cuomo pretended to have won the argument, smugly scolding conservatives to “stop” bringing up their faith as long as they support President Trump: “Stop saying that your party makes faith paramount in the positions and that character counts. Don't say it any more because you don't act on it any more.”

Cuomo brought on two more lefty panelists to gang up on Jennings after commercials. Always angry CNN commentator Angela Rye lectured Jennings that conservatives don’t really care about morality because “bigotry and fear” drive them: "Morals be damned, that is not what drives Donald Trump's voting base. It is bigotry. It is fear. It is judges who have lifetime appointments that may be pro-life, but they want to kill off everyone else -- our civil rights," she ranted.

Amazingly, she actually denied calling Jennings’ a bigot afterwards and had Cuomo aid her in gaslighting the conservative CNN contributor.

This whole exchange happened just a few minutes after Cuomo had berated Trump as someone who didn’t respect the faith of conservatives. Apparently his own Democrat guest disrespecting his conservative guests’ faith to their face was just fine, though.