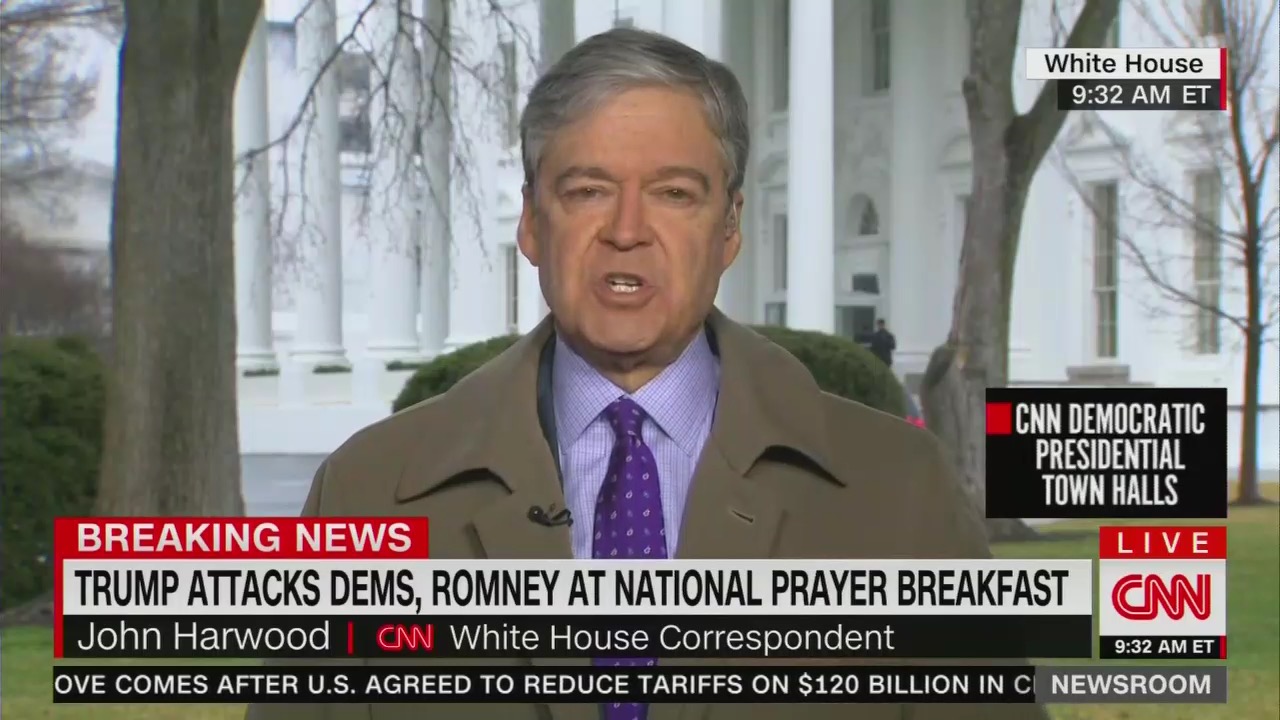 CNN’s newest White House Correspondent John Harwood seems to be trying to outdo Jim Acosta with his sanctimonious takes on President Trump. On CNN Newsroom Thursday Harwood defended Senator Mitt Romney [R-UT] and Democrat House Speaker Nancy Pelosi as people of “deep faith” who were acting out of their conviction of “right and wrong” to impeach the president, which was something that faithless and corrupt Trump had no understanding of.

Host Jim Sciutto started off by gushing about Romney’s vote being a “big blow” against President Trump, inviting Harwood to elaborate. Harwood happily obliged, feigning outrage at Trump attacking Romney for claiming his “faith” was the reason why he voted to impeach. Harwood lectured that Trump just “doesn’t understand” morality, right and wrong, like Pelosi and Romney, people of “deep faith”:

It's a big blow to the president. I think we have to step back and think about the two clips you played before as illustrating who those two men are. Mitt Romney, like Nancy Pelosi, for that matter, is a person of deep faith. By everything an outsider can see, President Trump is not a person of faith. He transacts political business with people of faith. He does not show any indication that he even recognized abstract principles like the difference between right and wrong or morality or values. He is concerned about Donald Trump.

And so in his remarks at the prayer breakfast, while talking about stock market values and poll numbers, he goes after Pelosi and Romney in this way and online, he and his family are even more viciously going after Mitt Romney, casting, you know, questions about his masculinity and portraying him as shady. All of these things are -- they show Donald Trump for who he is. He calls Romney sanctimonious. The reason Donald Trump thinks people are sanctimonious is because the moral considerations that go into their decisions, he doesn’t understand those. That doesn’t compute with him.

A little while later, the liberal hosts tried to rub it in panelist and Trump lawyer Jim Schultz’s face that allegedly Ted Cruz believed the Ukraine phone call was a “quid pro quo” situation. Schultz remarked that “didn’t matter,” it mattered that they voted to acquit Wednesday:

“It doesn't matter what they think in terms of whether it was right or wrong. The bottom line, it wasn't an impeachable offense, which is the defense put on by the president's team,” Schultz shot back. Harwood wasn’t done with his condescending analysis.

He praised Romney as exposing his Republican colleagues’ “tortured explanations” for acquittal:

That was the last word CNN host Poppy Harlow gave to the panel.