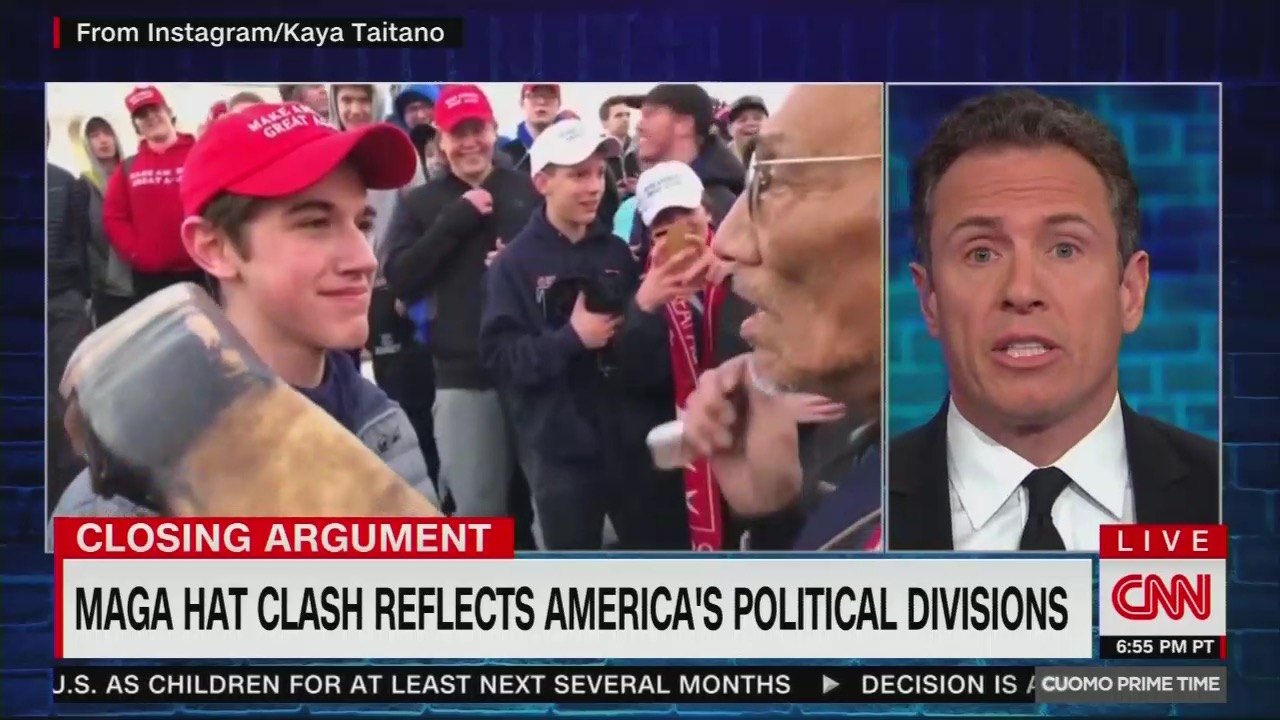 Self-awareness isn't Chris Cuomo's strong suit. The CNN host stepped in it, yet again on Thursday while trying to shame Treasury Secretary Steve Mnuchin over his comments to Swedish teen activist, Greta Thunberg at Davos, this week. Even after Cuomo’s network was sued for millions of dollars for defaming the Covington Catholic teens, Cuomo had the audacity to claim that kids were off limits.

Cuomo was responding to Mnuchin’s snarky comment that Thunberg should “go to college and study economics." The Treasury Secretary was prompted by a reporter to respond to the liberal teen activist's demands for immediate fossil fuel divestment, at the World Economic Forum in Davos.

The CNN host was aghast at the suggestion that a teen with an agenda might need a more balanced education. He tweeted dismissively, “Why do these trumpers think it is ok to go at a kid?” 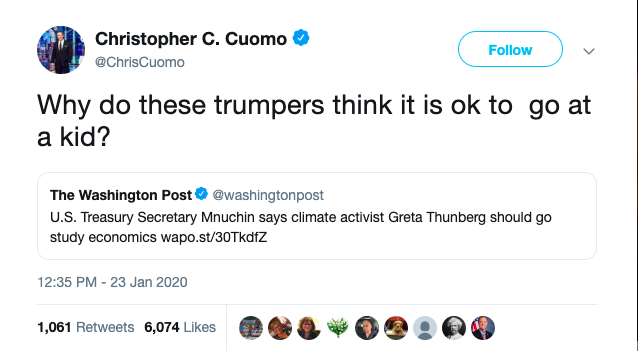 It seems Cuomo forgot his own company was forced to settle with Covington Catholic teen Nick Sandmann, after his lawyer sought $275 million from the news network for defaming Sandmann and his peers as racists, last year. His CNN colleague even wished violence on Sandmann at the time. The irony was too rich to ignore. So of course Cuomo was roasted on Twitter for his hypocrisy:

Nick Sandmann was 16 when CNN doxed and harassed him. https://t.co/xeMFX199OT

Your old colleague @CNN posted this about a kid having a punchable face and your employer paid a settlement to that kid for smearing him with the hoax media perpetrated against him. All Mnuchin did was point out her lack of economic expertise. Which is worse? Hypocrisy. pic.twitter.com/5bOHhe5yLW

Cuomo himself also went after the MAGA-hat wearing kids. Congressman Kelly Armstrong used a NewsBusters article to remind Cuomo of how he slandered the Covington kids, one year ago:

It seems only liberal kids are "off-limits" to the media. The media had no issues smearing a group of Catholic teens as racists for smiling while a liberal activist beat a drum in their faces. Several outlets had no problem attacking President Trump's teenage son for doing...absolutely nothing. Meanwhile, a Swedish teen radical who thrust herself into the global spotlight, lecturing world leaders for "stealing her dreams and childhood" gets the royalty treatment by the media and even Hollywood.