Nets Grovel Before Greta: She's 'Woke' With a 'Sweet Voice' That's 'Inspired a Lot of Kids' 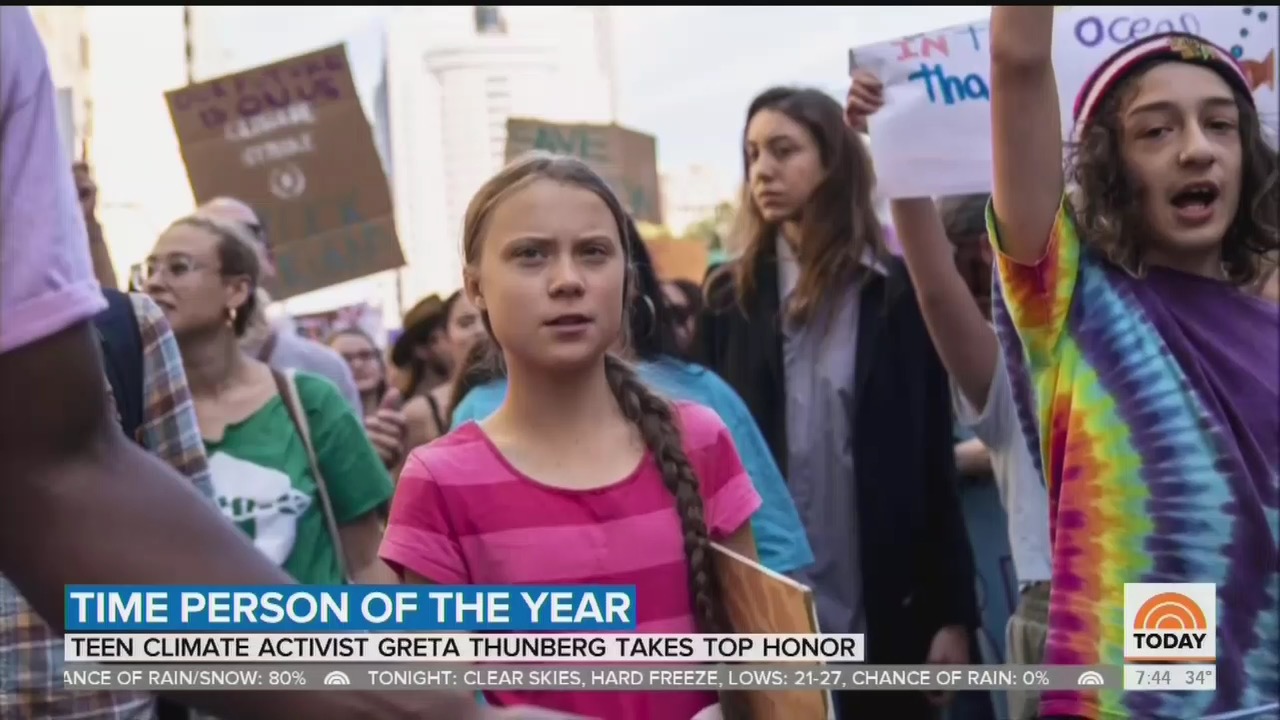 All three networks devoted reports Wednesday to hyping radical Swedish teen climate change activist Greta Thunberg being honored by Time Magazine today with their “Person of the Year” award. Journalists from ABC, NBC, and CBS all praised the “deserving” “good choice” and touted the teen “taking on” world leaders while “inspiring” other teens to become climate evangelists.

NBC spent the most time groveling over Greta. They even had Time’s editor-in-chief Edward Felsenthal on to puff up the teen as “the biggest voice on the biggest issue facing the planet this year,” leading a “worldwide movement.”

As if that wasn’t bad enough, on the third hour of Today there was more fangirling by the NBC journalists. The panel lauded the “good choice” from the magazine.

Today co-host Sheinelle Jones marveled at the 16-year-old’s “sweet voice” that she used to bash world leaders with at the UN summit: “And she's got that sweet voice….Everybody thought, aww look at this cute little girl, and she went for it!"

ABC and CBS were just as enthusiastic but only spent brief reports praising the young climate activist.

On Good Morning America, co-host Michael Strahan touted the “good news” that the teen activist had been named Time's Person of the Year for “taking on” world leaders at the climate summit earlier this year. Like NBC, Strahan and his co-host George Stephanopoulos emphasized how wonderful it was when teens were activists for the left:

STRAHAN: I mean, 16 years old. Congratulations to her. She had a passionate plea garnering a lot of attention. She definitely deserves it as well.

GEORGE STEPHANOPOULOS: She deserves it--Yeah, no question about that. Inspired a lot of kids.

CBS This Morning hosts were also pleased by the news but spent less than thirty seconds discussing Thunberg, whom co-host Gayle King lauded a “very good choice” by the magazine.

The media has spent months propping up the "climate crusader" with dozens of fawning reports that skip over her extreme beliefs.

Read the transcripts below:

HODA KOTB: Alright, so we’re going to get to it. Here to reveal Time’s 2019 Person of the Year is editor-in-chief Edward Felsenthal. Edward, we should point out that none of the five know who the actual recipient will be. So you’re about to announce it this second. Alright, so tell us who it is.

EDWARD FELSENTHAL [TIME EDITOR-IN-CHIEF]: It’s Greta Thunberg. She became the biggest voice on the biggest issue facing the planet this year, coming from essentially nowhere to lead a worldwide movement. And she also represents a broader generational shift in the culture that we’re seeing from the campuses of Hong Kong to the protests in Chile to Parkland, Florida, where the students marched against gun violence, where young people are demanding change and urgently.

FELSENTHAL: She does. She embodies youth activism. Youngest person ever to be Person of the Year.

MELVIN: As you know, Greta said a couple months ago that she was not going to accept this particular award at an environmental conference, saying the climate movement does not need any more awards. What do you think her response is going to be –

KOTB: When you call her up!

FELSENTHAL: I don’t know, but I think what she has done is – I mean, her rise in influence has been really extraordinary. She was a solo protester with a hand-painted sign 14 months ago. She’s now led millions of people around the world, 150 countries, to act on behalf of the planet and she’s taken this issue, and been really the key driver this year, taking this issue from back stage to center.

KOTB: Well, she’s a unique individual. Folks who don’t know her well should probably watch her TED talk. She talks about the fact that she has Asperger’s, that she’s different but she stands out in front. And I’m sure there are parents whose children, you know, have something like that who are probably looking at this young girl and are saying, like, you know (claps),way to go.

VLADIMIR DUTHIERS: Okay. So big news. "Time" magazine's person of the year has just been revealed. And that person is, drum roll, please --

MICHAEL STRAHAN: We're going to go to some good news now. This was just announced moments ago, the Time person of the year is 16-year-old climate change activist Greta Thunberg. You remember when the Swedish teen took on U.N. world leaders at the climate change summit. I mean, 16 years old. Congratulations to her. She had a passionate plea garnering a lot of attention. She definitely deserves it as well.

GEORGE STEPHANOPOULOS: She deserves it--Yeah, no question about that. Inspired a lot of kids.