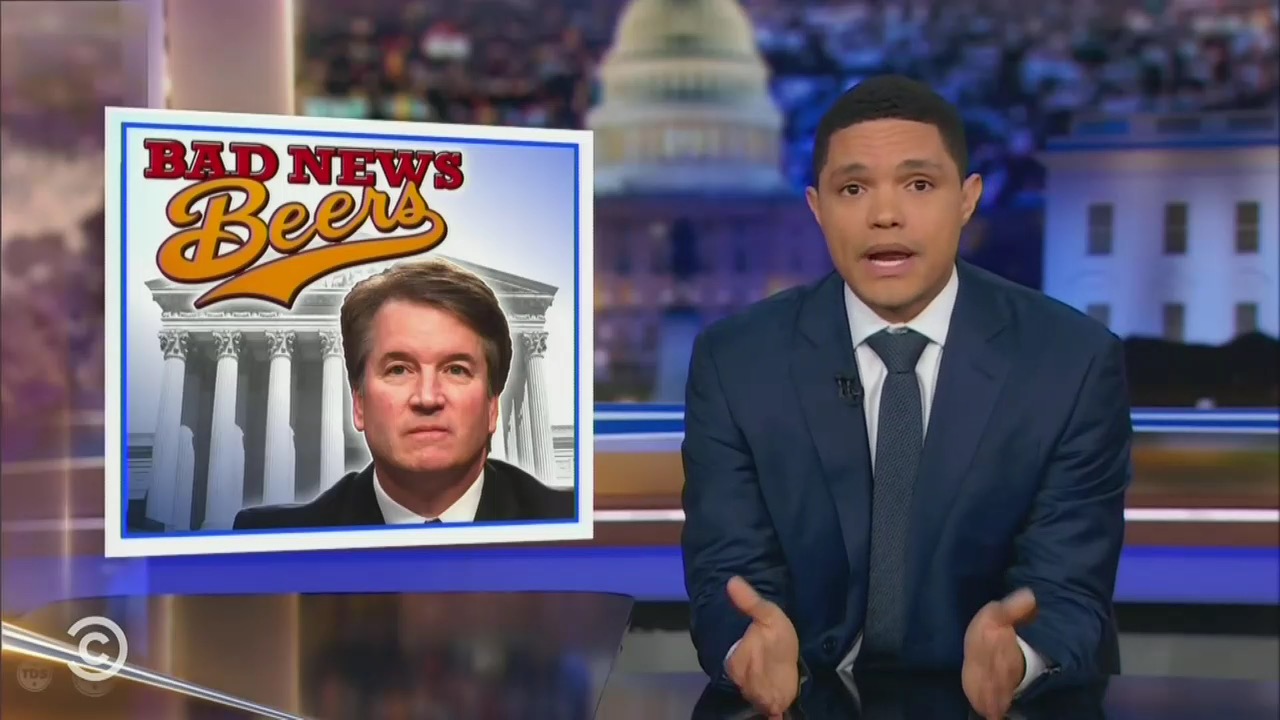 While the news media spent all of Monday hyping the latest smear from Democrats against Supreme Court Justice Brett Kavanaugh, comedian Trevor Noah continued the trend into late night. The Daily Show host mocked the conservative justice as a drunk exhibitionist who was constantly “whipping his di** out” and even compared him to accused sexual predator Jeffrey Epstein.

Noah opened his Kavanaugh mockery by snarking he was sponsored by Budweiser:

"Today's top story is all about Brett Kavanaugh, the newest member of the Supreme Court and the only justice to be sponsored by Bud Light,” he joked. Meanwhile, an image of Kavanaugh with the words, “Bad News Beers” was in the background. Noah reminded his viewers of how “contentious” and controversial Kavanaugh’s confirmation was, before gushing about the “bombshell” New York Times story that made Kavanaugh look “worse and worse:”

Goddamn! Every high school story or every college story we hear about Brett Kavanaugh makes him seem worse and worse. It's always something about him exposing himself… And you know, when you hear stories like this, it's hard to believe someone like that could ever go on to the Supreme Court. It must be even harder for people who actually went to school with Kavanaugh. Can you remember their conversations? Whatever happened to balls-out Brett? Actually, it's Justice balls-out Brett now.

“We may never know for sure what happened that night especially since the F.B.I. never even investigated it,” he opined, arguing that the Trump administration obstructed the investigation into interviewing key alleged witnesses to Deborah Ramirez’s accusations.

Yeah. It's not something you do when you're confident in someone's innocence. You'd just be like, interview anyone -- no, just them. Just them. Like Jeffrey Epstein saying, I have nothing to hide, look anywhere!-- Except the sex dungeon, don't look in the sex dungeon, yeah, and pedophilia island, don’t look there. But anywhere else! Anywhere else.

He quickly pivoted back to mocking the justice as a drunk frat boy who was constantly flashing people:

By the way, If these stories weren't true, why the hell was Kavanaugh constantly whipping his dick out at parties? Every single story, he's doing at high school parties, at college parties. I'm starting to wonder if Kavanaugh even understands what parties are! Like he just shows up to his grandma's birthday party -- happy 90th, grandma! No, Brett! We said bring your famous "Dip"!

Noah concluded the segment by joking that the real reason why Kavanaugh wanted to be on the Supreme Court was so he could wear a robe and no underwear.