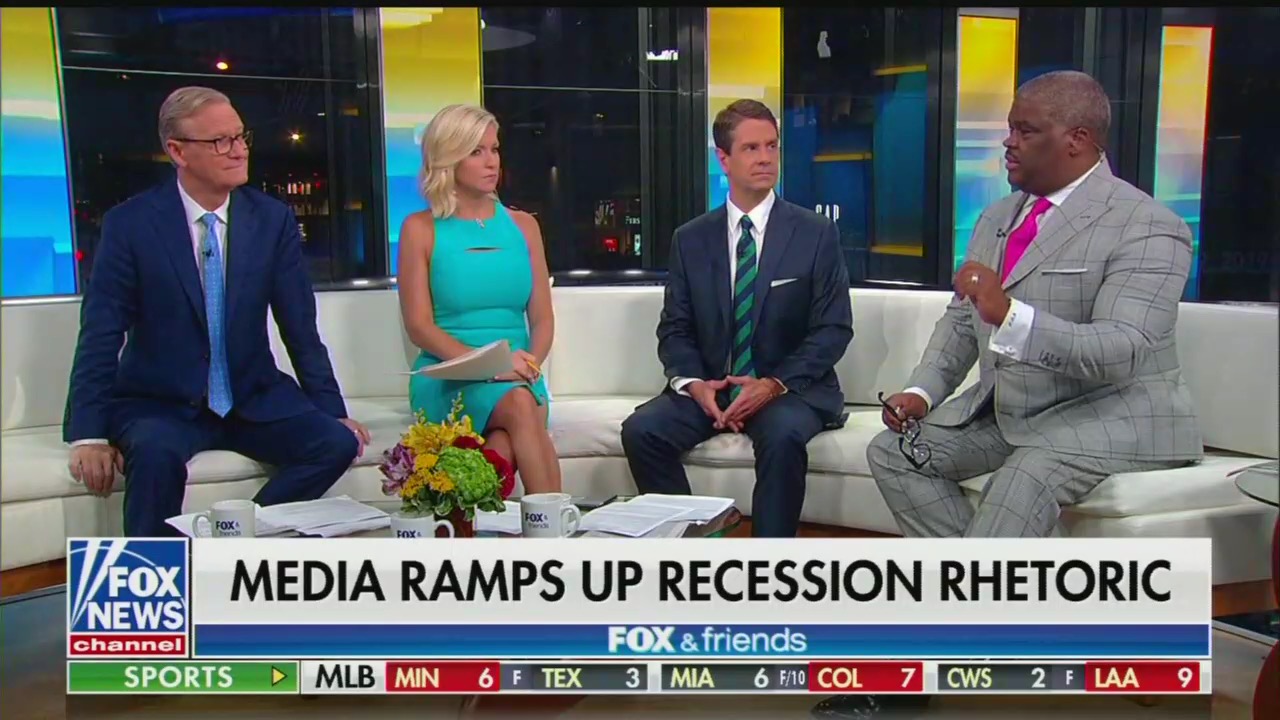 On Fox and Friends Monday, the hosts brought on Fox Business host Charles Payne to comment on how the media is now openly hoping for an economic recession under President Trump. Payne called the media’s newest obsession a “deliberate” attempt to derail the good economy under Trump, and argued there was “no economic data” to suggest a recession was near.

Co-host Steve Doocy began the segment pointing out that a strong economy often leads an incumbent president to be re-elected. Yet after a “wild week on Wall Street” the media all seemed to be hammering home the same talking point: a recession was looming. Playing clips of NBC’s Chuck Todd, ABC’s Martha Raddatz and CNN’s Jake Tapper all hyping recession fears, the co-hosts then asked guest Charles Payne to comment on the media buzz.

“Charles, I’m watching this and I’m like it’s so obvious what they are doing! They do not want him to win again and they do not like that the economy is doing well, apparently!" she gushed.

Payne agreed it was a “deliberate” move by some journalists to derail the prosperous economy the country is enjoying, before adding that no data supports this fear mongering:

The CEO of Bank of America put it the best, Brian Moynihan said: The only ‘fear of recession’ we have is, ‘fear of recession.’ In other words, the only thing can happen in this country right now that can derail this economic juggernaut, is if everyone believes it's going to be derailed. I hate to say it, but to the degree the media almost did that in December. I think some people do it deliberately. Listen, there is no economic data out there that suggests we are on the cusp of a recession.

Doocy brought up one media argument, which Payne quickly exposed as bogus:

DOOCY: Well they have suggested the inverted yield curve where have you more money on the short-term bond than the long-term bond.

PAYNE: The two and ten year yield inverted for 24 hours. The spread since then has gotten wider. It has to be longer than 24 hours. In the meantime, guess what we saw last week. We saw retail sales soar. Absolutely soar significantly better than anyone participated. We saw an earnings report from Walmart that was absolutely remarkable. Here’s why Walmart is a great proxy. Not because they did almost $131 billion in sales in three months but because every American goes there. You know one third of the shoppers have households of $100,000 income. People used to think, Walmart lower end. No. That's Americana.

The Fox Business host finished by highlighting again the media’s role in driving this negative narrative:

“Bottom line is it seems to be a deliberate attempt by many people to make this economy go into recession.” Immediately afterwards he clarified, “talk [the economy] down.”

Co-host Griff Jenkins stated this was a clear attempt by the media to hit Trump on his biggest strength going into 2020: “Clearly a strong economy is key to President Trump's re-election, so some are going after it,” he noted.

As if to make their point, the networks spent this morning rooting for a recession.