When a sitting congresswoman sides with our enemy over our own country, is that not newsworthy? Apparently the networks didn’t think so. They ignored a tweet sent Thursday by Minnesota Democrat Ilhan Omar, where she blamed America for Iran shooting down one of our military’s drones. The networks were nowhere to be found Thursday evening or Friday morning. 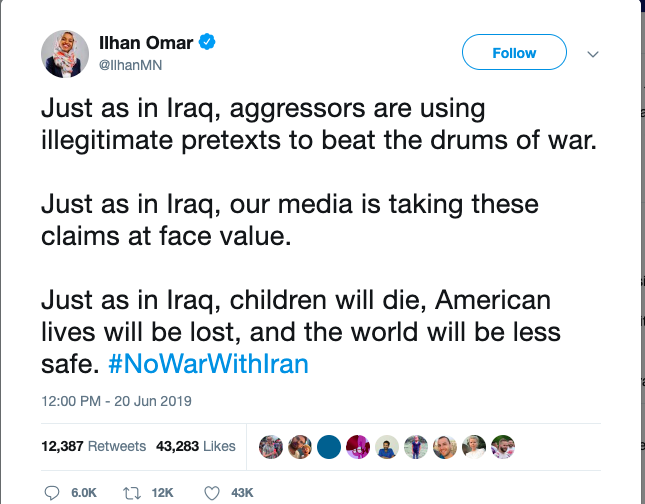 It seems odd that the networks would ignore Omar siding with a foreign adversary, given all the Chicken-Little dramatics they did reporting on Trump’s summit with Kim Jong-un.

Notice she also blames the media for being war-mongers and believing what U.S .intelligence has to say. Where is the press outrage when the attacks come from a Democrat instead of Trump?

This isn’t the first time the networks have chosen to ignore controversial, anti-American tweets and statements from the Democrat congresswoman.

She’s yet to face any media backlash for calling U.S. troops, “killers,” blaming America for Venezuela’s socialist problems, and downplaying the 9/11 terrorist attacks.