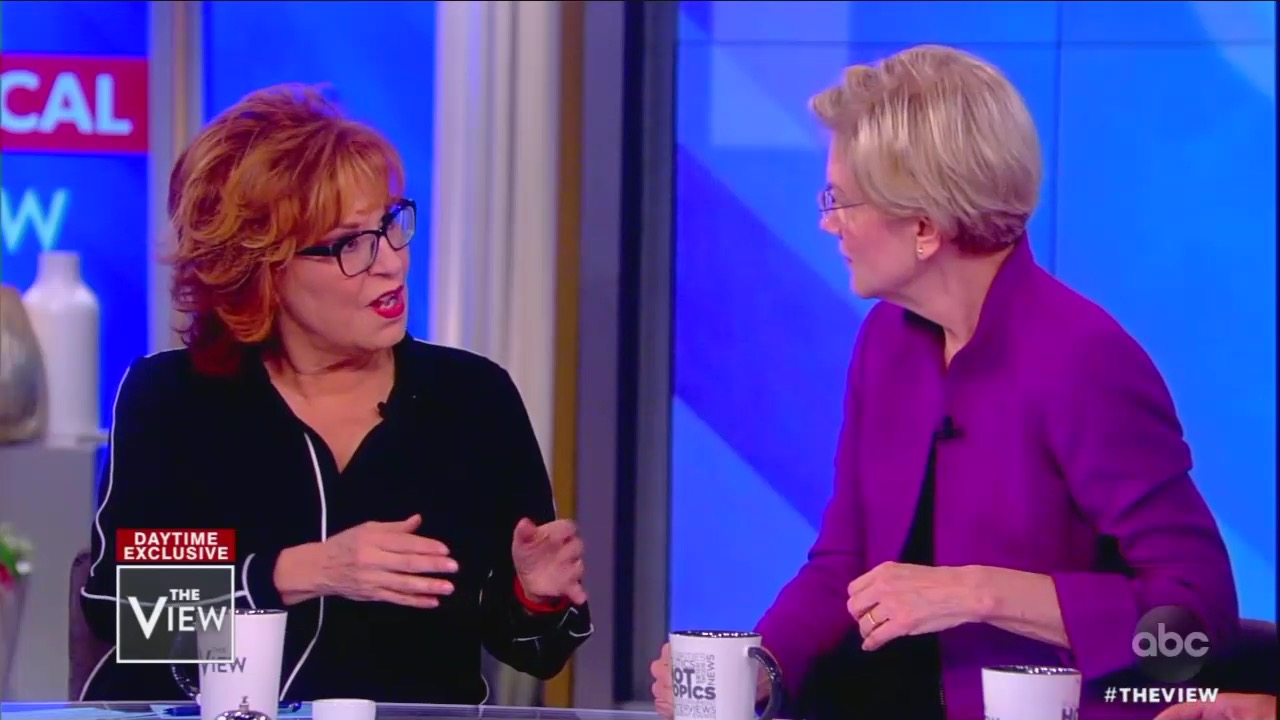 2020 Democratic candidate Sen. Elizabeth Warren (D-MA) received an enthusiastic welcome from the hosts of ABC’s The View Thursday, and packed the audience with her liberal fans. The lengthy segment felt more like a political rally, as the audience loudly cheered every answer she gave to the hosts about her support for far-left issues like abortion and student loan-debt “forgiveness.”

After co-hosts Sunny Hostin and Joy Behar fretted with Warren about Democrats being reluctant to do “their job” and fulfill their “Constitutional obligation” to impeach Trump, they asked about her policies, in a lightning round. Hostin only asked Warren about her support for far-left policy positions:

How would you protect Roe V. Wade?

Bridging the wealth gap between white families and black families, reparations or not?

Student loan debt is crippling our youth. What's your plan?

Warren, clearly trying to compete with Bernie Sanders over the “Most Socialist-Democrat” award, went to the far-left on all these issues. Most notably, she wants the federal government to take away states’ rights on abortion issues, and wants an unconstitutional tax on wealth that will supposedly pay off a majority of students’ loan debt.

Her radical policy positions were enthusiastically welcomed by the audience who loudly cheered after every point she made. Even the View hosts seemed pleased, with Sunny Hostin at one point smiling and reciting Warren’s motto, “She’s got a plan for that!” After Warren explained her wealth tax, Hostin seemed pleasantly surprised by her promises, exclaiming, “Really?Wow!”

Afterwards, Joy Behar snarked unhappily, “Senator, you know what’s going to happen. You know what they’re going to say to all the wonderful plans you have? They use "The S" word, socialism. How do you counterattack that kind of assault?” Warren just rolled her eyes and continued pontificating on the problem of student debt.

If you thought that Meghan McCain would be the one to ask Warren a question from the right, you’d be wrong. The only semi-critical question McCain asked was about Warren refusing to do a Fox News town hall, which she viewed as a mistake, but that take was shared by her liberal co-hosts as well.

To make matters worse, McCain later opined about how unfairly the media treated female candidates, and asked Warren to comment on the inherent “misogyny” of the media. While there could definitely be a case made that the media attacks and despises conservative women, liberal women like Warren certainly don’t receive that same combative or dismissive treatment from the media.