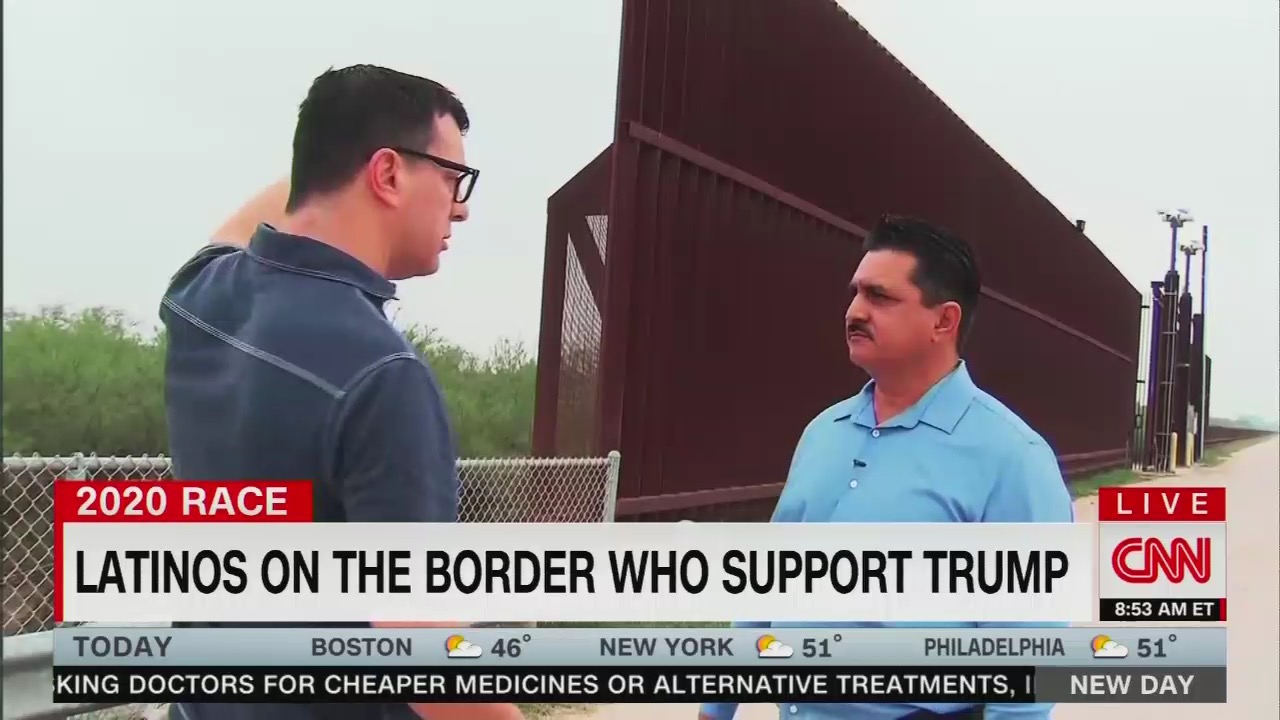 CNN journalists were shocked this week to find out their own poll revealed roughly one-third of Latinos, 34%, support President Trump. Correspondent Miguel Marquez highlighted the numbers as he spoke to pro-Trump Hispanics in his report which first played on Erin Burnett OutFront Monday evening, then replayed on New Day Tuesday morning.

New Day anchor John Berman introduced the report Tuesday, even conceding that the poll had a “wide margin of error” after another poll earlier this year revealed even higher support among Latinos.

From the border wall in McAllen Texas, Marquez spoke to Hispanics at the U.S./Mexico border who supported Trump, the first being Rolando Rodriguez, who lived a mile away from the wall. The CNN correspondent noted that Rodriguez supported Trump in a variety of areas but particularly on immigration.

“You want to see this not only taller, but longer?” he asked, pointing to the wall. As Rodriguez explained he wanted the wall at least twice as tall and wide as it was currently, a surprised Marquez kept pressing. “You want the whole border, 2600 miles?” he asked again, to which Rodriguez confirmed with enthusiasm, saying he believed it would be a deterrent for the “bad people.”

Another Trump-supporting woman told Marquez that her top three issues were “abortion, the economy and immigration,” and that “we do have a lot of problems with immigration, and I do support his stance for the wall.”

Throughout the report, Marquez continually tried to downplay Trump’s support among Hispanics:

According to Gallup, a majority of Latinos disapprove of the president's job performance, many angered by the family separation policy focus on the wall and rhetoric about immigrants. The President still has some Latino support. About a third which is on par with other past Republican presidents.

Although he downplayed the numbers, Trump did receive more votes from Hispanics than Mitt Romney did in 2012. Additionally, an NPR/PBS Newshour poll from January this year found much higher support than CNN’s poll, finding a whopping fifty percent of Hispanics approve of the job President Trump is doing.

Finally, Marquez spoke with Joacim Hernandez, the President for Hidalgo County Young Republicans, who said their memberships have more than doubled within the last year. “Trump supporting Latinos here say the president has more support than many are willing to admit,” the journalist conceded, before raising skepticism about Hernandez’s claims.

“How difficult a sell is it to young Republicans, to young people to Latinos in this area to support the Republican party and the President?” he asked.

Hernandez revealed he was shocked to see the turnout when Trump came and visited. To close his report, Marquez hammered home again that most Latinos do not support Trump. “Most Latinos across the country say they do not agree with the President on his immigration policies, and his idea of building a wall, but those that we spoke to in this area, say that there is a national emergency and that they’d like to see this thing doubled or tripled in size,” he stated.

CNN doesn’t highlight Hispanics who support Trump that often but when they have in the past, it’s typically been negative. For example, in July of 2018, New Day Sunday correspondent Rosa Flores spoke with Hispanic immigrants who supported Trump tightening immigration enforcement, sneering that they had “shunned their heritage.”