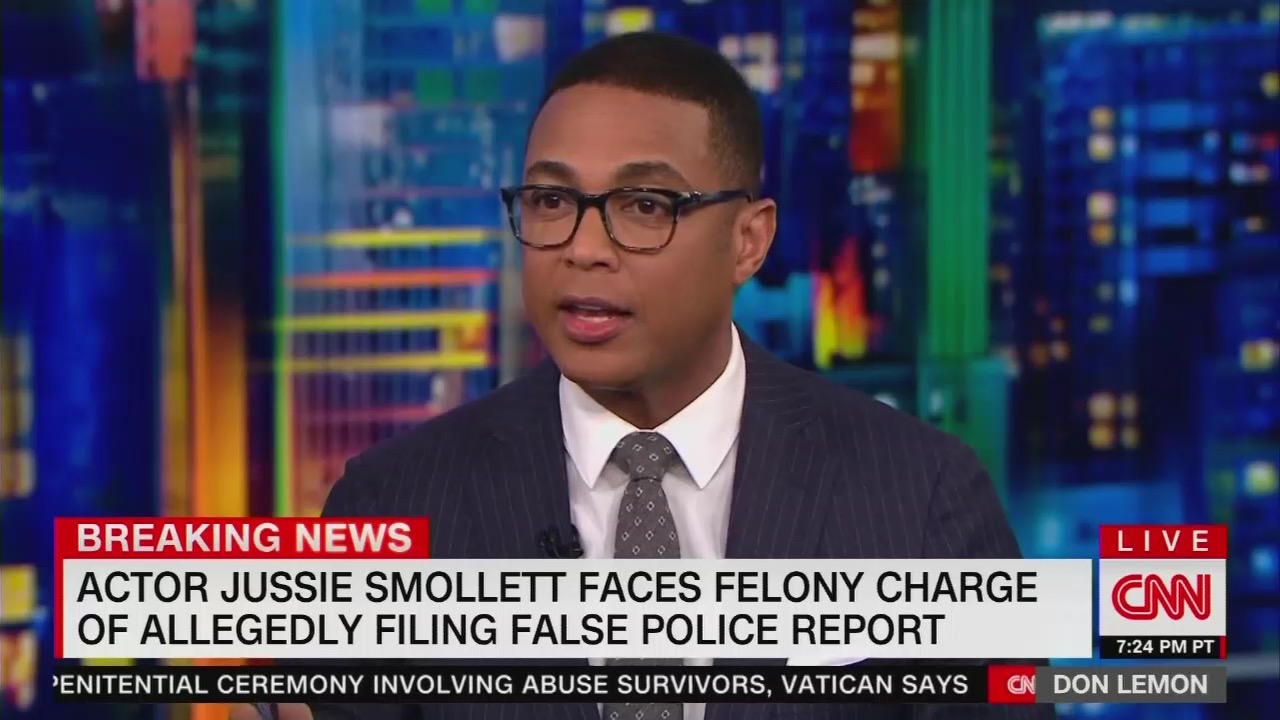 CNN host Don Lemon patted himself on the back for a job well done reporting “just the facts” on the ridiculous Jussie Smollett story, on his show Wednesday night, after news broke that the actor was being charged for filing a false police report. Lemon bragged that his network had always treated the story skeptically from the start, before weirdly going on to defend Smollett as a victim of his own hoax.

Discussing the story with host Chris Cuomo, Lemon bemoaned how some in the media had got into “speculation” instead of real reporting... but not CNN, of course!

“[Y]ou know, it's been interesting trying to report on this particular story. We've done several reports on this show, just the facts straight. Here's what we know. Here's what we don't know because you don't want to get into a place where you are -- you're just sort of speculating,” he gushed. Lemon didn't explain why his network gave the story so much airtime if they were so skeptical of it. Nor did he explain why his colleague Brooke Baldwin reacted with horror to the original story.

On his own show, a few minutes later, Lemon again boasted that “a lot of people” had treated the story with skepticism from the beginning:

"A lot of people were reasonably skeptical about Jussie's story. Some of the details just didn't seem to make sense. And as we always say around here, facts first. But the facts raised a lot of questions," he touted.

Bringing on guests, attorneys Joey Jackson and Midwin Charles, Lemon also gave credit to “black queer folk” such as himself, that were “skeptical from the beginning” because of the strange details in Smollett’s story.

In another weird moment, Lemon slammed ABC’s Robin Roberts at Good Morning America as not a “real journalist,” because of her interview with Smollett last week, before trying to correct himself:

They talk about the news for a few minutes -- nothing against morning shows. I love all my colleagues there. I think they do a great job. But that's not where it is now, especially when it comes to this. What I'm saying is that doesn't work. Come on a show like this or any of my other colleagues and sit down with us live for an hour or however long it takes. Answer the questions that need to be answered from real journalists -- I shouldn't say that -- from journalists who don't have to worry about the entertainment arm of their particular company.

But the most outrageous part of this entire segment was when Lemon claimed Smollett was not to blame for how this played out:

LEMON: It matters. And he lost that because of how -- and not his fault. Maybe people were -- I don't know what they were saying to him. Maybe because of his representatives..?

LEMON: But it was handled poorly.

JACKSON: I don't know if it's not his fault.

LEMON: You think it's his fault?

JACKSON: Well, he went out and gave the interviews.