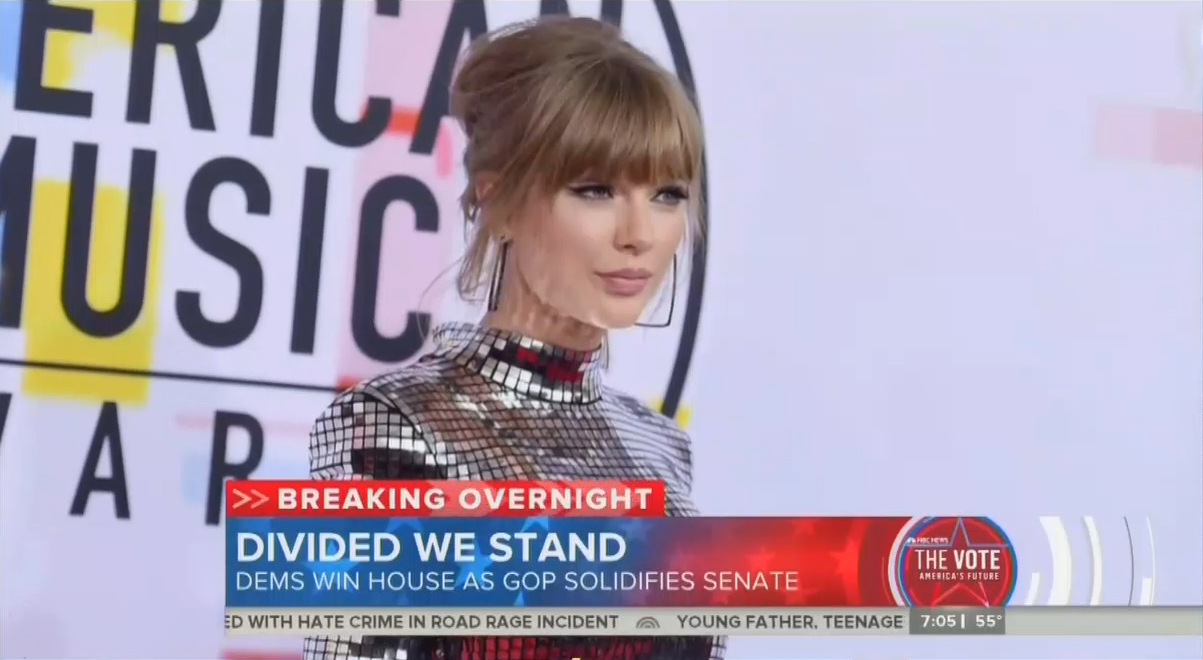 Nearly a month ago on October 8, the networks were thrilled when the usually silent on politics pop star posted an endorsement for Democrat on her Instagram. But the morning of November 7, barely a peep was made from all three networks on her candidate losing.

On ABC, Blackburn or Bredesen’s names weren’t even mentioned in the reports on the Senate races, November 7. But ABC spent plenty of time praising the wave of women Democrats who took the House races as “historic” and “record” breaking. Apparently it's only “historic” when a Democrat woman wins her political race.

CBS’s PAULA REID: Most of the seats went to Democrats who took back the house and congress, but Republican women made their mark in American politics as well. Marsha Blackburn became Tennessee's first female senator helping the GOP secure their majority in the Senate.

In another segment on CBS, Nancy Cordes noted Bredesen’s loss despite being “very popular” in the state. She did not mention Swift.

Flashback to October 8 when the networks couldn’t get enough of Taylor Swift endorsing Blackburn’s liberal opponent. On ABC’s Good Morning America, Eva Pilgrim touted the singer “sounding off” on politics, reading off her stinging rebuke of Marsha Blackburn as a racist bigot:

PILGRIM: Swift saying she cannot support GOP Senate candidate Marsha Blackburn because “her voting record in Congress appalls and terrifies me.” The superstar writing, ‘I cannot vote for someone who will not be willing to fight for dignity for ALL Americans, no matter their skin color, gender, or who they love. These are not MY Tennessee values.’

NBC and CBS similarly spent reports touting Swift’s endorsement of a Democrat in the red state as significant. On CBS This Morning October 8, the anchors gushed over Swift’s millions of Instagram followers, noting that her effect on the midterms could be major for Democrats.

After reading Swift’s condemnation of the GOP lawmaker, Dickerson added: Swift urged her more than 112 million followers to register to vote in the midterm election.”

Also on NBC’s Megyn Kelly Today October 8, left-wing pundit Zerlina Maxwell gushed how important it was for Swift to voice her support for Democrats, because Republicans were putting everyone’s lives at stake:

So I think it is important for her to wade in. And her reasoning was because everything’s on the line in this upcoming election in terms of rights for people of color, for the LGBTQ community….[W]omen’s rights are literally on the line, our lives and our bodies are on the line, Taylor Swift is an important voice to articulate that point.