CNN's Kirsten Powers: ‘No Matter How Credible,’ ‘Truthful’ Women Are, We 'Won’t Be Taken Seriously’ by Republicans 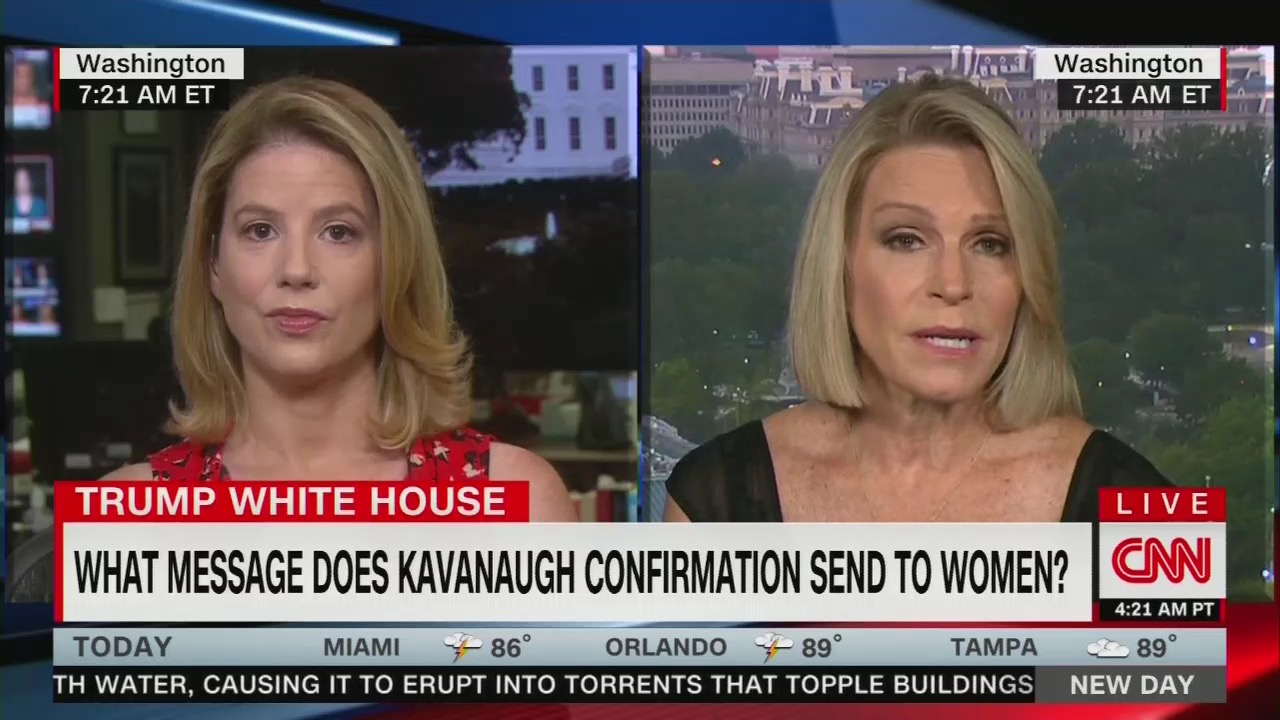 Monday on CNN’s New Day, CNN political analyst and USA Today columnist Kirsten Powers battled it out with fellow CNN analyst and Republican strategist Alice Stewart over how women reacted to the confirmation of Judge Brett Kavanaugh to the Supreme Court. Host Erica Hill didn’t even pretend to be giving a fair, unbiased question to her guests, asking, “What message does the nomination of Brett Kavanaugh send to women?”

Powers was up first and bashed Republicans for essentially “telling” Christine Blasey Ford to “sit down and shut up.” Powers claimed that Ford was “truthful” and “credible” while she slammed the “sham investigation” run by the FBI:

I think the message is that, if you come forward and no matter how credible you are, no matter how calm, reasonable, truthful you are in your testimony, you won't be taken seriously, you will be sort of patted on the head and patronized the way the Republicans did of Christine Blasey Ford saying, Oh we believe her but we don't believe it was Brett Kavanaugh, which is actually the essence of not believing her, and we just won’t take it seriously. We will do a sham investigation and then we will tell you to sit down and shut up. I think that's a really terrible message to send to women, and when people say I don't understand why women don't come forward, I would say, let’s look at what just happened.

Stewart pushed back on Powers’ allegations, saying Ford “was listened to” and the FBI “looked at it completely.”

She added, “The bottom line, the takeaway is that an incendiary accusation doesn't mean an instant conviction, and while this is not a court of law this is important that people have the presumption of innocence."

As she was saying this, Powers closed her eyes dramatically and kept shaking her head in disgust. But Stewart went on with her argument, noting that liberals were trying to paint Republicans as anti-women (nothing new there) because they believed in due process:

“So many people are trying to turn this and conflate the fact that Republicans and so many of those that supported Judge Kavanaugh gave the due process and giving the benefit of the doubt means we don't like women, and that's completely not the case,” she stated. Stewart went on to defend Senator Collins, arguing that one could “believe Dr. Ford” had a “traumatic experience” and “not believe it was Justice Kavanaugh.”

Powers pushed back against Stewart, saying she was “trying to have it both ways,” adding that “holes” in Ford’s story don’t mean anything because of her own personal experience with sexual assault where she didn’t remember details either.

Hill jumped in to moderate, bringing up the midterms question. Citing Democrat Amy Klobuchar, Hill stated that, “The Senate does not look like the rest of America” and “does not represent” the demographics of the country. Wrapping up the interview, she asked Stewart if Kavanaugh’s nomination would “significantly change things” in the Midterms for Republicans.

Stewart avoided the racial component of Hill’s question, saying that because of the #MeToo movement, a dialogue has been opened that wouldn’t have been a topic of national conversation thirty years ago.