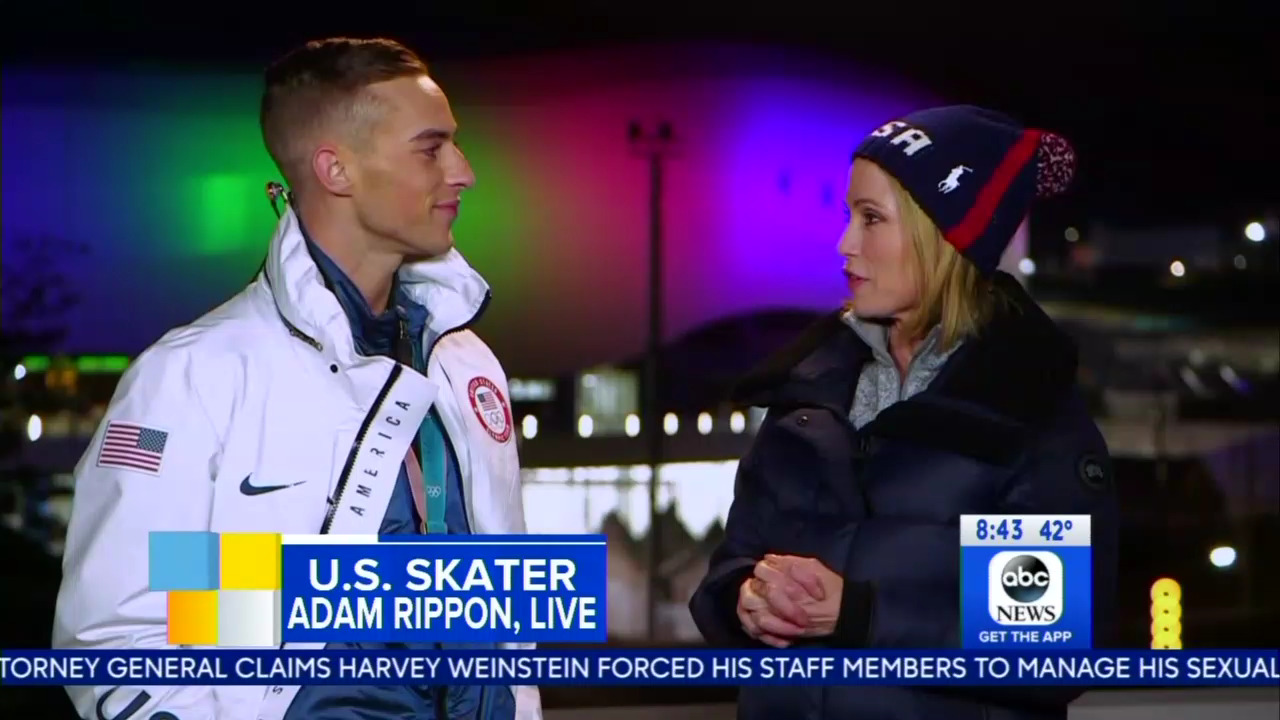 Just like she did last week, ABC anchor Amy Robach tried to bring left-wing activism into her coverage of the Winter Olympic Games on Good Morning America, February 12.

From Pyeongchang, South Korea, Robach sat down with Olympic athlete Adam Rippon and immediately asked what message the openly gay skater he had for Vice President Mike Pence.

After congratulating the skater for earning bronze at last night’s competition and sympathizing with Rippon that he got “robbed” after the first and second place winners made multiple mistakes in their routines, Robach swiftly pivoted to politics.

She praised Rippon for being the first openly gay Winter Olympian from the U.S., calling that “a pretty remarkable thing.” Robach touted the athlete’s criticism of Vice President Mike Pence, leading into the games, where he told USA Today that he would “absolutely not” meet the VP if given the chance.

“If it were before my event, I would absolutely not go out of my way to meet somebody who I felt has gone out of their way to not only show that they aren’t a friend of a gay person but that they think that they’re sick,” he told the paper. To other media outlets he has suggested that Pence is a hypocrite for calling himself a Christian and supporting President Trump, among other criticisms.

Robach asked Rippon if he still felt the same way about the Vice President now. “When the Olympics are over, would you sit down with Mike Pence? And what would you say to him?” she eagerly posed to Rippon.

Rippon blasted the Republican leader, saying he had “nothing to say” to Mike Pence. He went on to say that he was fortunate to not have been affected in any way by Pence’s past “anti gay legislation” but that he was using his platform at the games to speak out in support of other people who have been affected.

“[A]nd so I spoke out for them. Because I right now have a voice. And, um, I think it's really important for me to use it,” he answered Robach.

The ABC anchor went on to tout Rippon’s friendship with fellow gay Olympian, Gus Kenworthy, and over how “cute” the two of them were. The pair hugged to end the report as the rest of the ABC panel gushed about how "charming" Rippon was.

Robach performed the same routine last Friday, on the first day of the games, when she interviewed Kenworthy.

Robach asked Kenworthy about his outspoken criticism of Mike Pence, leading up to the games. Robach asked, “Will you get to meet with him beforehand, is that how it usually works?” Kenworthy was horrified at the prospect, telling her, “I sincerely hope not.”

The networks have a long history of using the international games to bash patriotism and praise other countries’ communist and socialist governments as superior to our government and way of life.

AMY ROBACH: You were the first openly gay U.S. Winter olympian, which is a pretty remarkable thing. You were making headlines then, you made further headlines when you spoke out about Vice President Mike Pence. I have a question for you. You alluded that you might do this. When the Olympics are over, would you sit down with Mike Pence? And what would you say to him?

ADAM RIPPON: You know what, I personally don't have anything to say to Mike Pence. I'm very lucky because legislation he's pushed has not affected my life at all. I spoke out because there are people out there whose legislation -- whose lives have been affected by change he's tried to make. And so I spoke out for them. Because I right now have a voice. And, um, I think it's really important for me to use it. So that's a conversation -- a conversation for them.

ROBACH: You also have a teammate. Gus Kenworthy who is openly gay. You two are firsts in the winter Olympics. He was there cheering you on today which is awesome. I loved seeing the post that the two of you had. What has his friendship meant to you in this Olympics?

RIPPON: We have been corresponding, heading into the games. And we said that okay, before opening ceremonies we have to meet. We finally met. And, um -- you know, we got to walk in together. And, I -- that's -- you know, we have a bond now that we'll have for the rest of our lives. And he's such a sweetheart. He’s supernice. Super cute.

ROBACH: Stop it some more!