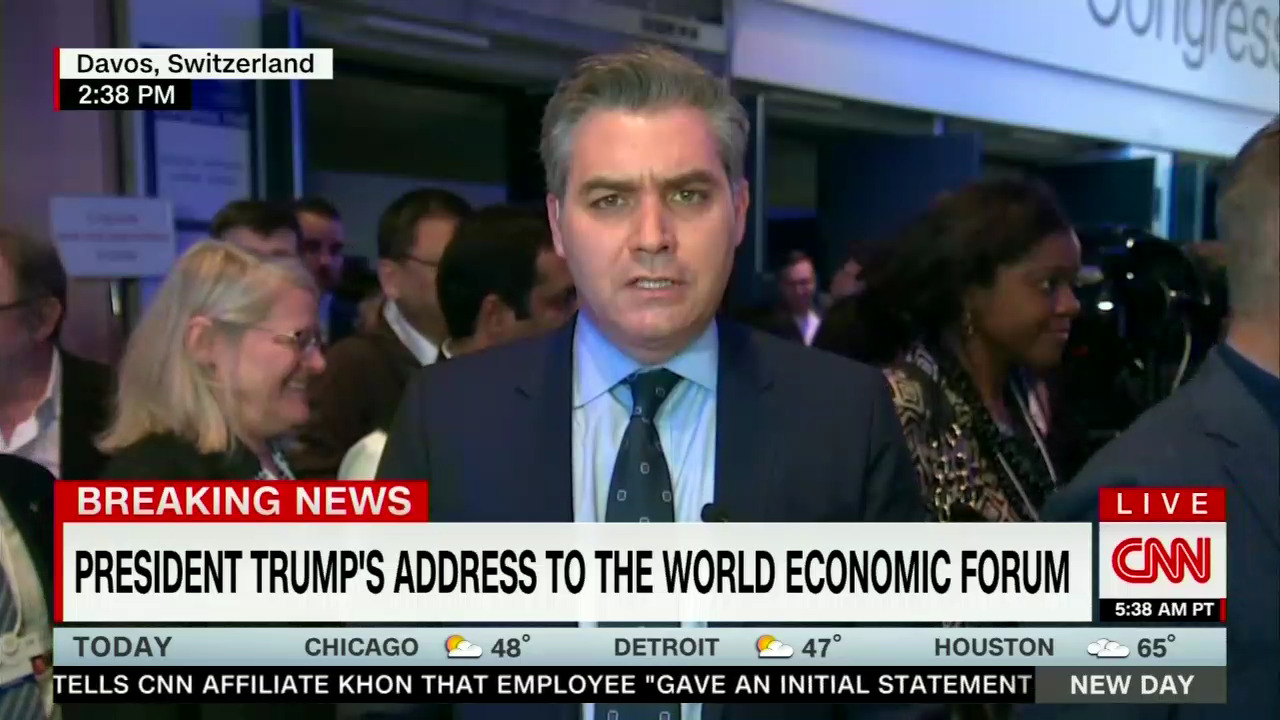 In the midst of fretting that President Trump boasted about the growing economy during his speech in Davos this morning, CNN’s Jim Acosta took a break to whinge about the President’s brief jab at the press during the event.

During a Q&A at the Friday forum, Trump explained that he had always had a good relationship with the press, until he entered politics.

“And it wasn't until I became a politician that I realized how nasty, how mean, how vicious, and how fake the press can be. As the cameras start going off in the back,” Trump said, pointing to the press in the back of the room. Audible boos were heard from the journalists after Trump joked that they would turn off their cameras.

But the journalists booing weren’t the only ones peeved at being called out for their bias. CNN’s perpetually offended Chief White House Correspondent Jim Acosta led the charge in grumbling on CNN’s New Day.

“I think perhaps the most fascinating moment came at the very end there where the President went off script for a few moments and took a shot at the press and said how fake the press can be in the U.S,” Acosta explained, adding that it was probably a “reaction” to The New York Times story alleging he wanted to fire Robert Mueller back in June of 2017.

“Obviously the President feels like he's had a pretty good reception here in Davos, for somebody who railed against globalism as a candidate for president, he has been mixing and mingling with these fat cats and bigwigs nonstep ever since he's been on the ground in Davos and he's had a pretty friendly reception,” Acosta snarked.

The journalist then admitted was surprised by the crowd’s reaction to Trump’s brief interlude taking a swipe at the press. Apparently the crowd of business leaders wasn’t sympathetic enough to the plight of the press, noting that even the economic forum’s founder called the President a “victim of biased interpretations and misconceptions.” That reaction disturbed Acosta, calling it a “pitiful display”:

I will say though, it was rather remarkable to hear the founder of this World Economic Forum also take jabs at the press and say that the president is the victim of biased interpretations and misconceptions. All in all, that was a fairly pitiful display I think to have so many business and global leaders here have those kinds of statements made with the president by his side and then nobody really take exception to that. That is sort of what we're living in. That's the environment we live in with President Trump.

It’s too bad the founder and exec chairman of #WEF18 didn’t take exception to Trump remarks on press. Disappointing.

After that whine fest, Acosta went on to give Obama credit for Trump’s economic growth. He finished his rant admitting that the friendly reception was “not what he expected”:

All in all, it was fascinating to the president get this reception here in Davos. Not what I expected. Having covered this president and heard him rail against globalism and free trade and so on. He's certainly tailored his message to this crowd here and they seem to enjoy it.