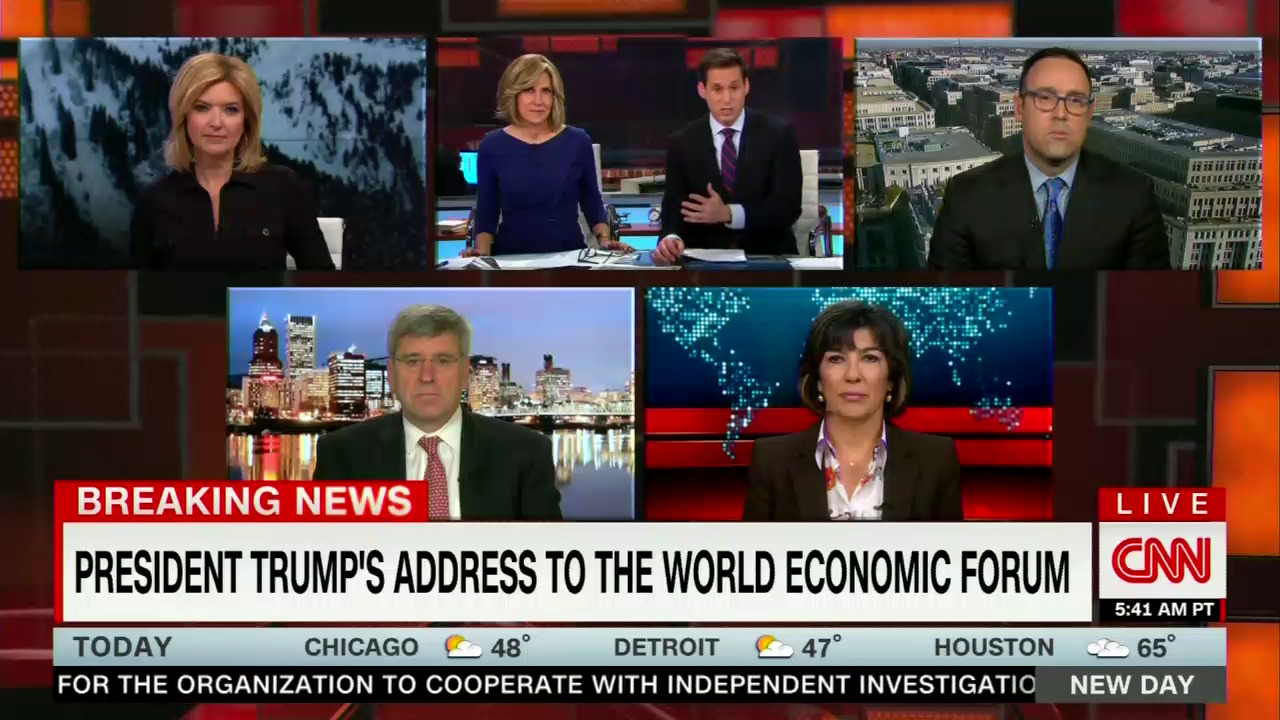 Immediately following President Trump’s Friday speech before business leaders at the World Economic Forum in Davos, Switzerland, CNN had the usual knee-jerk reaction to find something to complain about.

Despite the abundance of stories of how Trump’s tax plan has aided dozens of big companies in passing on their saved money to their employees, CNN refused to give Trump credit for the positive economic growth.

During his speech in Davos, Trump touted how his tax plans has already made great strides in improving our economy:

…[W]e've just enacted the most significant tax cuts and reform in American history. We've massively cut taxes for the middle class and small businesses to let working families keep more of their hard-earned money. We lowered our corporate tax rate from 35% all the way down to 21%. As a result, millions of workers have received tax cut bonuses from their employers in amounts as large as $3,000. The tax cut bill is expected to raise the average American’s household income by more than $4,000...

That part irked the liberals on CNN’s New Day panel, who griped that Trump really didn’t deserve credit for any of these developments.

CNN International host Christiane Amanpour not only disagreed that Trump should be taking credit for the economy, but claimed that “most” people agreed that President Obama was really the one responsible:

“There's no doubt that the Davos crowd loves the corporate tax cuts, loves the stock market, loves the fact that the economy is doing well. Most will say that the U.S. economy is building on the Obama years, building out of where it was going since the financial crush,” she claimed.

Chief White House Correspondent Jim Acosta jumped in to back up Amanpour, dismissing Trump’s role in improving the economy, because he was only “building on what was happening during the Obama years:”

[H]e was taking credit for the booming U.S. economy over the last year. Obviously the president can take credit for that. He's the President of the United States. But as Christiane was saying, some of this is building on what was happening during the Obama years.

Acosta also seemed to have a sudden case of amnesia, conveniently forgetting all the stories that have already come out over the past month of companies citing the corporate tax cuts as the reason why they were giving to their employees raises, cash bonuses, incentives and hiring more employees. “We will have to find out what happens in the coming months as to whether or not these massive tax cuts that predominantly went to corporations and wealthy individuals will have an effect and will actually trickle down to everybody across society in the United States,” Acosta said, skeptically.

The CNN reporter downplayed any of this news translating to Trump’s approval ratings or ability to get more Republicans elected, come midterms.

“If people give him such high marks on his handling of the economy and how well the economy is doing, but that hasn't translated to helping his poll numbers a great deal, I think that will be one of the determining factors heading into the midterms this year,” he stated.

CNN’s Early Start host and Chief Business Correspondent Christine Romans praised the economic growth but again refused to give Trump the due credit for the positive news, even suggesting companies touting these improvements were just bluffing for “public relations”:

There are some who worry privately and publicly that it will exacerbate income inequality, that most of those tax cuts will go to the top 1% and to companies, but at least public relations-wise, you're seeing all these other companies saying they're going to give bonuses. That's something the president is taking credit for and says that they did not really anticipate.

New Day fill-in co-host John Berman added that Trump shouldn’t take credit because the unemployment low and job creation was right “where it was in the Obama years, in some cases, a little bit less.”

Finally the sole conservative on the seven person panel, economic analyst Stephen Moore, pushed back against the anti-Trump narrative CNN was spinning, saying, actually, the economy has improved since Obama left office:

Just to do some fact checking. The American economy wasn't accelerating at the end of the Obama administration. It was decelerating, it grew at 1.5% GDP which is barely out of recession. Now we've seen this incredible doubling of the economy to 3% over the last three-quarters which is a great performance. Every signal on the economy is very positive right now. Trump took a victory lap here.

Moore isn’t the only one who thinks Trump deserves credit for the economic gains. The Wall Street Journal found that there was unanimous agreement with the 68 economists they surveyed, that Trump was responsible for the booming economy, not Obama.