At a Navajo veterans’ ceremony over the weekend, President Trump made a brief joke at Democrat Senator Elizabeth Warren’s expense, calling her "Pocahontas," that left the media practically foaming at the mouth. 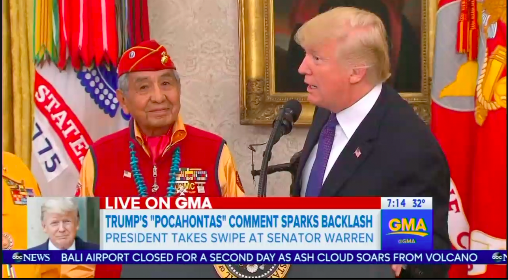 ABC, NBC and CBS’s morning shows Tuesday all characterized the dismissive comment as President Trump’s latest “scandal,” while eagerly touting Warren’s rebuttal to the joke as part of an ongoing “racially charged feud” between the two.

ABC’s George Stephanopoulos, Matthew Dowd and Meghan McCain perhaps had the most overdramatic analysis of the comment, slamming it as a “gross” “attack” and a “racial slur,” on Good Morning America.

Anchor George Stephanopoulos hyped that “the president raised a lot of eyebrows” with this comment, inviting “Republican” analysts Meghan McCain and Matthew Dowd to bash Trump.

After playing the video clip of Trump saying Warren is known as “Pocahontas,” Stephanopoulos sneered, “Actually, Meghan, it's the President who calls her Pocahontas.”

This never stops being uncomfortable for me to watch the Navajo Code Talkers are some of of our greatest heroes from WWII and I think bringing up this sort of gross political term that’s used against Elizabeth Warren in this context is particularly in poor taste and I will say if Democrats want to put up Elizabeth Warren for 2020 this is just a preview of a small token of what it will be like.

“Not only did the president say that when the White House Press Secretary Sarah Sanders was asked about it later she went on to attack the senator,” Stephanopoulos gushed, bringing Matt Dowd in to comment.

“This is unreal. I totally agree with Meghan. Notally did he say that, which is considered by many a racial slur, he was standing in front of a portrait of Andrew Jackson who signed the Indian Removal Act that basically led to the trail of tears and a death march for these people,” Dowd complained.

“This White House is Wile E. Coyote. Every time they have a lay up, they blow themselves up,” Dowd remarked, to Stephanopoulos’ laughter.

Believe it or not, Dowd didn’t come up with that overwrought analysis all by himself. NBC’s Today show highlighted it was actually Elizabeth Warren who deemed the insult a “racial slur,” a term which got replayed and highlighted across cable news Tuesday morning.

NBC played a video clip of Warren slamming Trump shortly afterwards, saying “All the president had to do was make it through this ceremony and honor these wonderful people. And what did he do? He had to throw out a racial slur.”

Later on, NBC read statements from the head of the Navajo nation calling the comment “insensitive” and another unnamed tribal group calling it a “slur.”

CBS This Morning’s Major Garrett also deemed the insult “racial,” saying Trump “injected race into one of the most benign of Oval Office settings.” In his report, he added, “With Navajo code talkers at his side, President Trump chose an event to highlight their life saving World War II translation methods to re-ignite a smoldering racially charged feud with Massachusetts senator Elizabeth Warren.”