Dan Rather: ‘History Will Justify’ NFL Anthem Protests, Like With ‘Women’s Right to Vote’ 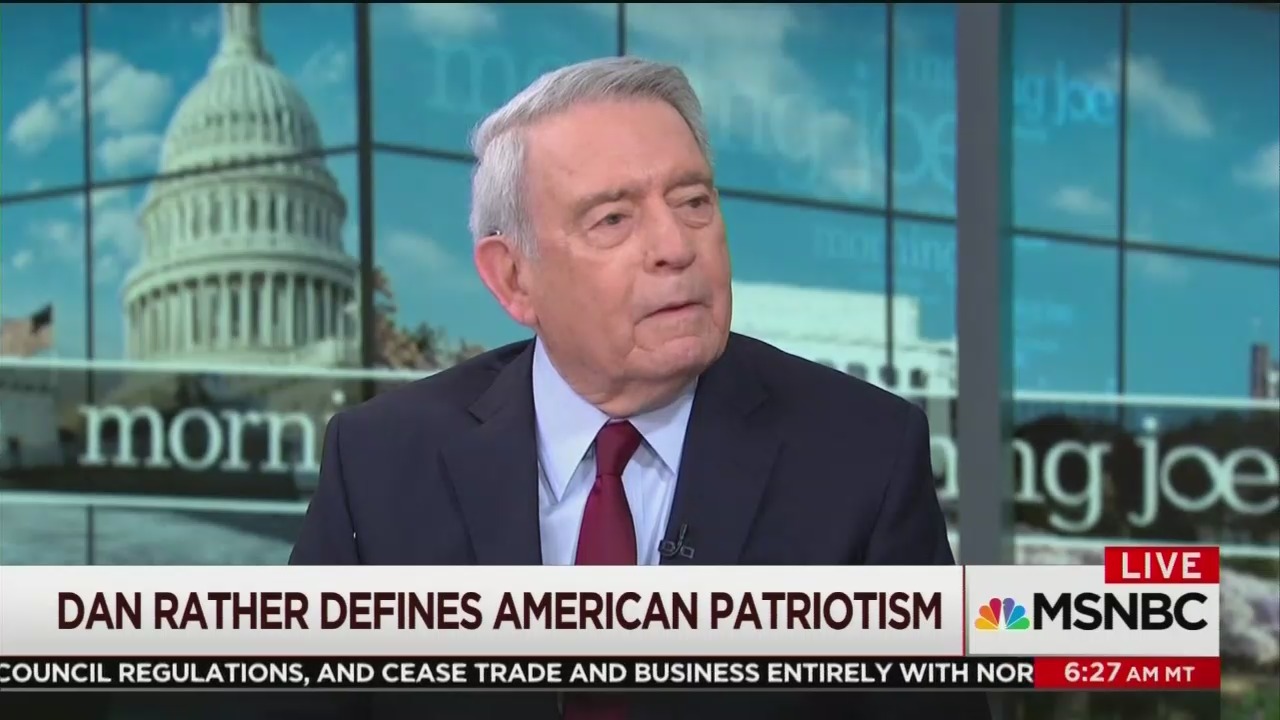 Disgraced former CBS News anchor Dan Rather has been making his media rounds to promote his new book, entitled What Unites Us. Tuesday morning he appeared on Morning Joe, to discuss the NFL protests, the lack of “civility” in our country, and what patriotism means to him, to an enraptured MSNBC panel.

Despite Rather’s own partisan pontificating on Facebook over the "con man" "liar" Trump, the liberal hosts let Rather drone on and on about the “lack of civility” the country is currently facing, and argue his support for the”patriotic” NFL protests, which he claimed “history” will “justify” like they did with “women’s right to vote.”

After a warm and gooey introduction, Morning Joe host Willie Geist asked Rather his take on the NFL protests, and what patriotism means today:

Rather answered that although he stands for the anthem with his hand over his heart, he understands that dissent is “as American as the Revolutionary War” or as “apple pie.” He went on to argue that everyone needs to respect, and listen to the anthem kneelers, because they aren’t “disrespecting the country or the military,” they are “calling attention to injustice.”

That’s when Rather went really tone-deaf, arguing for “civility,” not able to recognize his own part in causing division with his hyperbolic Facebook posts, or that the overwhelming majority of Americans who disagree with the anthem protests don’t find that they bring the country together.

Rather even compared the NFL protests to the right to vote, saying that “history justifies their dissent:”

[S]o I think it's important to listen to one another. And the most important thing is to lower our voices. We need an injection of civility with one another. Respect for the other person's point of view. That doesn't mean we don't stand up for our principles, for example with the Ku Klux Klan. Take one example. It doesn’t mean you have to nod your head and say, Yes yes yes I understand the Ku Klux Klan. You can be true to your principles and still respect the right of people to dissent. And indeed the need for people to dissent. Let’s not forget that dissenters in their time are frequently seen as outliers, even unpatriotic. But as time goes along, history justifies their dissent. Women's right to vote for example. Can you believe we spent almost the first fifth of the 20th century and still didn't give women the right to vote. Those women we're talking about women's right to vote back in the 19th century, were seen as radically dissenters and some people saw them unpatriotic. We need to keep that in mind.

Later on, Geist brought up the “divisions” in this country, comparing it to the 1960s, asking Rather to explain what “parallels” he saw today, culturally. Rather answered that the country has gone through very divided times in the past, even going back to the Civil War, so he was optimistic that we would get through this time. However, only if we admit that the country is still taking away rights from blacks, apparently:

“We have not gotten there,” host Mika Brzezinski added.

She wrapped up the interview, gushing it was “great to see him and hear his voice.” Rather paid her his own compliments, saying he was “so proud” of Brzezinski and she “just went from one triumph to another.” While journalists and media outlets are constantly touting their perceived reputation as “truth-tellers,” they don’t seem to have any problem frequently looking to a disgraced anchor, who was fired for reporting on fabricated documents against President Bush, for wisdom and words of “truth.”

Rather’s shoddy reporting is all but forgotten by the liberal news media, who are so quick to forgive their own, that NBC’s Savannah Guthrie can even ask Rather for advice on how to “enhance the media’s credibility” so people don’t think they “make up stories,” and be completely serious while saying it.