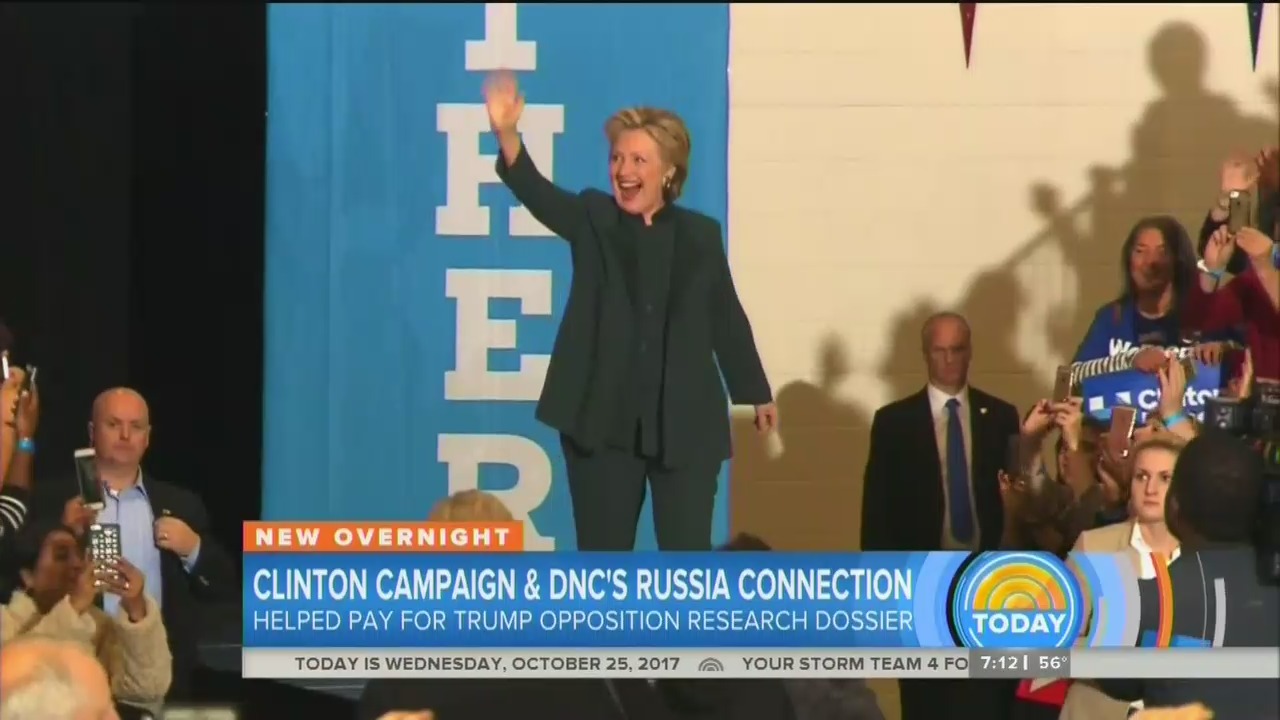 Wednesday morning, all three networks covered the damning revelations that broke last night, revealing the Clinton campaign and DNC paid for the controversial Russian “dossier” released just days before Trump’s inauguration. While CBS This Morning and NBC’s Today show gave full reports to the serious topic, ABC’s Good Morning America only devoted a few seconds to the story, as an end to another report.

JACKSON: [H]illary Clinton out on her book tour, is now a private citizen. But as a presidential candidate, we're learning her campaign helped pay for research, leading to a now-famous dossier, looking into Donald Trump's potential ties to Russia. A source familiar with the matter, tells NBC News, a lawyer working for the Clinton camp and the Democratic National Committee, hired the firm, Fusion GPS, for research services, that began in April 2016 and concluded before the election in early November. That research was turned into the explosive document of unverified and sometimes salacious claims about the president. It was one of the big mysteries during the campaign and transition: Who paid for the dossier, put together by a British ex-spy, Christopher Steele?

NBC’s Jackson centered her report on the Clinton campaign and DNC’s involvement in gathering the opposition research, unlike CBS’s Jeff Pegues who spent the majority of his report arguing for the Democrats, saying this dossier still held damning information on the president:

CBS’s JEFF PEGUES: Since January the allegations in the dossier have gained credibility in the eyes of FBI agents working the Russia investigation. CBS news confirmed earlier this year that parts of it were being used as a roadmap as agents unraveled alleged Trump connections to Russia. But with new ties to the Clinton campaign coming to light the President's supporters are once again calling the Russian investigation partisan

NBC also was the only network of the three to reveal that the firm working to gather the information, Fusion GPS, pleaded the fifth in court last week:

JACKSON: [R]epublicans have long insisted the real Russia scandal involves who is behind that dossier, which claimed Moscow was compiling compromising information about then-candidate Trump. The president’s press secretary tweeting overnight, “Clinton campaign paid for the fake Russian dossier and lied about it and covered it up.” Just last week, after Fusion GPS officials pleaded the fifth on Capitol Hill, the president tweeted, “Justice Department and/or FBI should immediately release who paid for the information.”

However, NBC also gave time to quoting both former Clinton campaign spokesman Brian Fallon and Democrat Rep. Adam Schiff, who defended their actions. “Democrats say it's not about who funded the dossier. It's the allegations in it that need attention,” Jackson added.

While CBS spent 2 minutes and 27 seconds reporting on the story, and NBC spent 3 minutes and 55 seconds on it, ABC didn’t find the story especially newsworthy, devoting just 31 seconds to the topic, at the end of another report:

GEORGE STEPHANOPOULOS: Meantime on another front, We also learned yesterday that the DNC actually paid for some of that research that went into that dossier that's become so infamous after of course some Republicans paid to fund it during the primaries against Trump.

JON KARL: We learned through an intermediary the Clinton campaign paid for the research that became the dossier and the democratic party. What we don't know is who the Republican was and to me that's one of the great mysteries. It started with a Republican foe of Donald Trump.

ROBIN ROBERTS: Have no idea.

That added up to just 31 seconds of coverage from the network this morning. Yet when the shoe was on the other foot, and it was revealed that President Trump’s son Don Jr. had e-mailed and met with a Russian lawyer to dig up dirt on Hillary Clinton during the campaign, ABC was more than eager to report on it, spending 60% of its newscast and over ten minutes on the topic the day it broke.

The other two broadcast networks spent endless time covering the Don Jr. meeting as well. A NewsBusters study found that all three networks spent over an hour talking about the Trump meeting, devoting 62 minutes and 18 seconds to the Don Jr. story.

Yet the media’s fascination with Russian collusion doesn’t seem to apply when it comes to Democrats. In 2015, the media all but ignored when the Clinton’s Russia-Uranium scandal, after it first broke, (before the recent revelations to that story.) The nets spent just 3 minutes and 1 second to the Obama Administration and Hillary Clinton working with foreign agents. That’s 20x less coverage than the Trump Jr. meeting.

Again, as more details broke about that Clinton-Uranium scandal, the nets initially refused to report on it, waiting 8 days to cover the story before ABC broke it in just a 20-second brief on Tuesday night’s ABC’s World News Tonight broadcast.

These numbers prove the blatant double standard from the media on how they report Trump vs. Clinton scandals, particularly on working with foreign agents. The media only seemed to care about Russia’s involvement in the 2016 election if Trump was somehow to blame. But when actual collusion between Clinton and Russia was revealed, in more than one instance, it’s brushed under the rug or treated as just another story.