The Big Three (ABC, CBS, NBC) evening news shows, in the last four nights, have been dominated by Donald J. Trump Jr.’s 2016 meeting with a Russian lawyer at Trump Tower – a meeting in which apparently no favors, money or meaningful information was exchanged – but those same shows all but ignored Hillary Clinton’s Russia-Uranium scandal back in 2015.

Author Peter Schweizer, in his 2015 book Clinton Cash, broke the story that a Canadian uranium company, seeking approval of a sale to the Russian government from then Secretary of State Clinton’s State Department, had donated millions to the Clinton Foundation.

At the time, then-Secretary of State Hillary Clinton was considered the favorite to win the Democratic nomination but the networks couldn’t care less. Total amount of Big Three evening news network coverage of that story in over two years? Just 3 minutes and 1 second.

However, in just four nights the Big Three networks have swamped their evening news shows with 62 minutes and 18 seconds of Donald Trump Jr. coverage, or 20 times more than what they devoted to the Clinton Foundation uranium deal scandal. 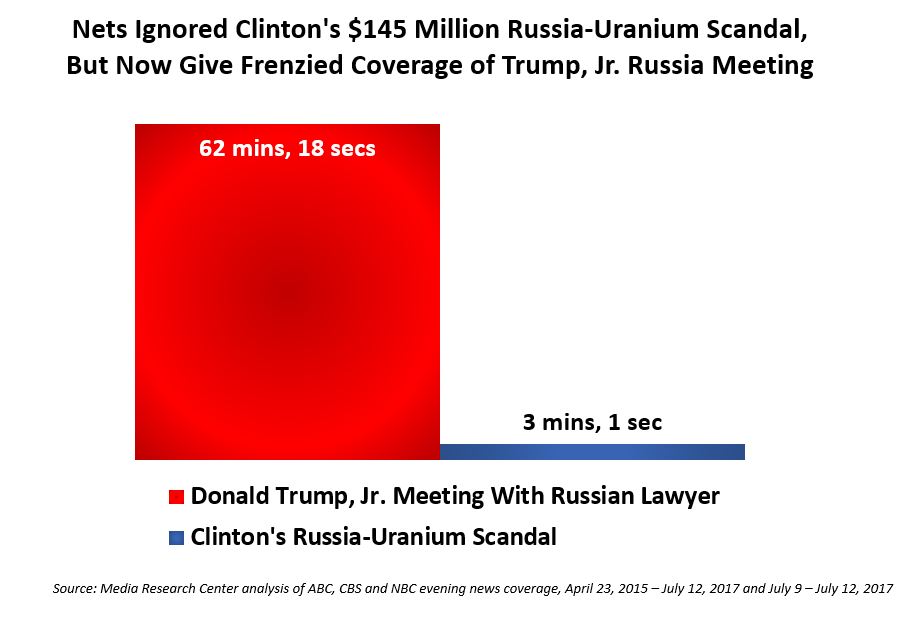 In contrast, since April 23, 2015 the NBC Nightly News has spent a grand total of 92 seconds on the Uranium-Russia deal. The CBS Evening News devoted a total of 61 seconds on the Schweizer revelations, followed by ABC World News Tonight at just a mere 28 seconds of coverage.

On the April 23, 2015 NBC Nightly News, correspondent Andrea Mitchell reported: “When she took office, Hillary Clinton, pressed by the White House, agreed to a memo voluntarily disclosing foreign contributions. But the upcoming book Clinton Cash, obtained by NBC News, claims she did not live up to that promise. For example, while Secretary Clinton was trying to reset relations with Russia, the book describes how Russia`s nuclear agency Rosatom gained control of a U.S. uranium 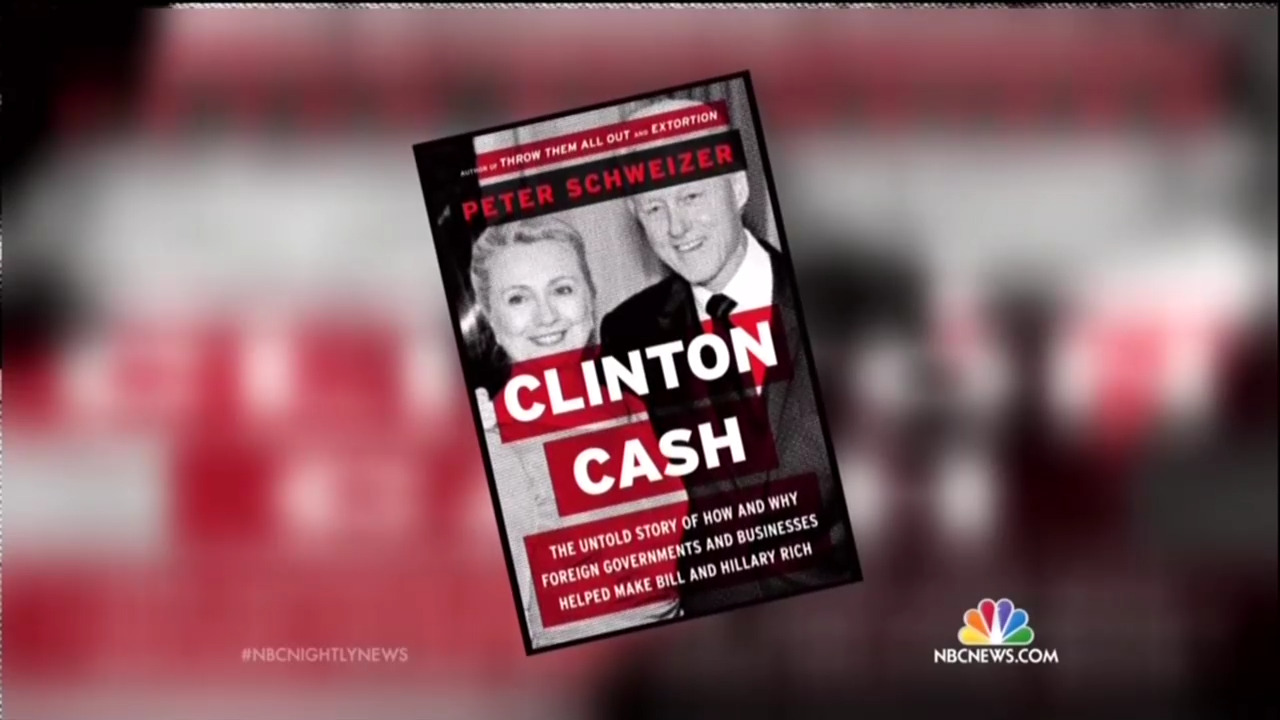 company. The author, former George W. Bush aide Peter Schweizer writes, shortly after the Rosatom deal was announced, Bill Clinton was in Moscow for a particularly well-compensated speech. He was paid five hundred thousand dollars, from another Russian entity.”

Mitchell continued: “And the book claims, however hawkish Hillary might have been on other deals, this one sailed through. The Russian purchase of Uranium One was approved. The author asks, why the apparent reversal? Could it be because shareholders involved in the transactions had transferred approximately one hundred forty-five million dollars to the Clinton Foundation or its initiatives? Republicans are pouncing.”

Mitchell laid out a damning set of facts, but the NBC Nightly News has never again mentioned the scandal.

Over on the April 23, 2015 ABC World News Tonight, correspondent Cecilia Vega briefly relayed The New York Times version of the uranium story: “Report after report questioning foreign donations it [The Clinton Foundation] scandal accepted while Clinton was Secretary of State. The New York Times reporting that, as Clinton State Department was signing off on the sale of one of America’s largest uranium mines to Russia, the mine’s chairman used his family’s charity to donate more than $2 million to the Clinton Foundation. And despite promises of transparency, those donations never disclosed.”

That brief mention, more than two years ago, is all the coverage this story has received on ABC World News Tonight.

CBS Evening News didn’t arrive on the uranium story until March 29, 2017 and then it was only to knock down President Donald Trump’s claims, as anchor Scott Pelley reported the following: “Well, today, President Trump sowed confusion on the Russia investigation. He asked why the media are not covering, quote, ‘Money from Russia to Clinton for the sale of uranium?’ Well, here’s why, no credible source alleges that Hillary Clinton was paid by Russia for American uranium. But like most conspiracy theories, there is an atom of truth in this. By 2013, a Russian company purchased twenty percent of American uranium deposits. That was approved by a committee, including Clinton’s State Department, but also including the Departments of Treasury, Justice, Defense, Homeland Security, Commerce, and Energy, plus the U.S. Trade Representative, and the Office of Science and Technology. Separately, the deal was okayed by the Nuclear Regulatory Commission. Secretary Clinton could not have stopped the deal.”

Schweizer countered that argument and more when he broke down the connections in a March 3, 2017 FoxNews.com article:

Then there is the glaring fact that the Clinton Foundation also scored $145 million in donations from nine shareholders in a Canadian uranium company called Uranium One that was sold to the Russian government in 2010. The deal required the approval of several federal government agencies, including Hillary Clinton’s State Department. The deal allowed Rosatom, the Russian State Nuclear Agency, to buy assets that amounted to 20 percent of American uranium.  Rosatom, by the way controls the Russian nuclear arsenal.

Equally troubling: some of those donations were hidden and not disclosed by the Clintons. President Obama required the Clinton Foundation to disclose all contributions as a condition of Hillary Clinton becoming Secretary of State. But that did not happen. The only reason the hidden donations ever came to light is because we uncovered them by combing through Canadian tax records.

Everyone got what they wanted in this deal: the uranium investors made a nice profit; the Russians acquired a strategic asset; and the Clinton Foundation bagged a lot of money.

Hillary Clinton says she was not involved in the decision to approve the sale of Uranium One.  As proof, the Clinton campaign in 2015 trotted out her former aide, Assistant Secretary of State Fernandez, to say publicly that we should take his word for it that she was not involved in approving that deal. But as we now know from the leaked Podesta emails, Fernandez was all too eager to help Podesta kill the story, while getting other favors from Podesta.  That raises questions about the veracity of his comments.