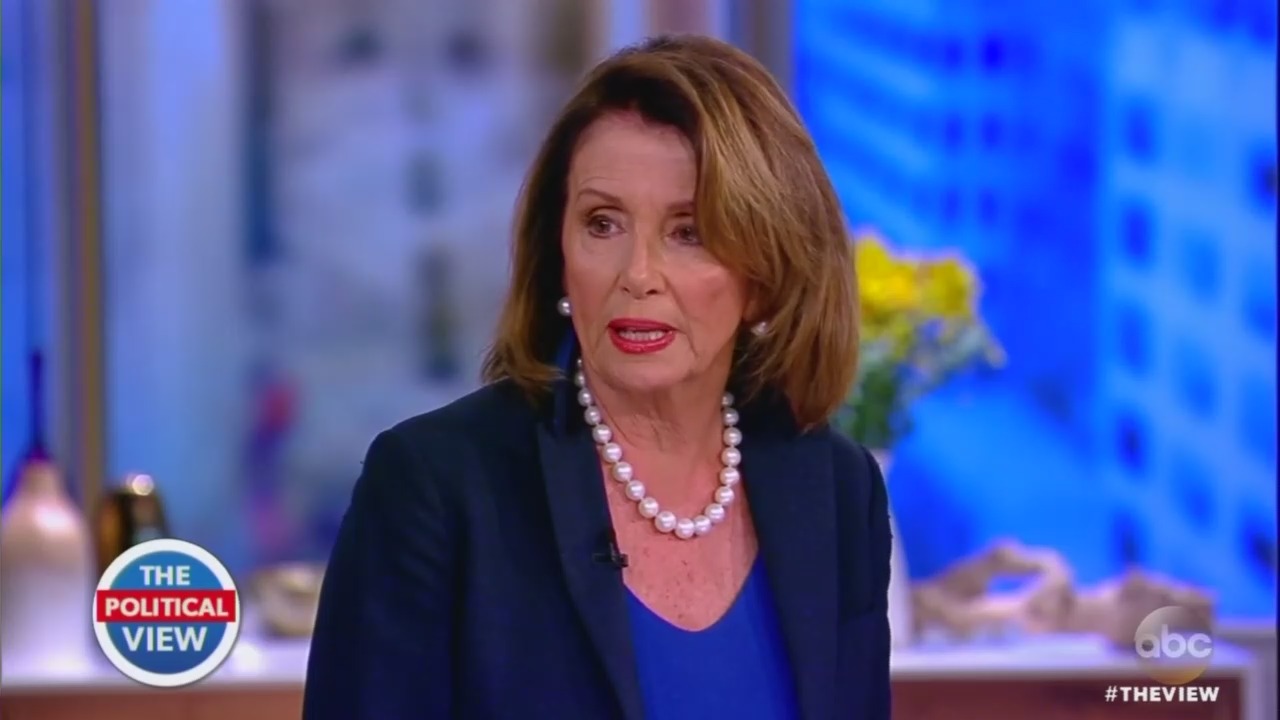 House Minority Leader Nancy Pelosi appeared on Friday’s The View, where she defended Democratic Congresswoman Frederica Wilson (Fla.), her own party, and claimed there was no culture war going on in America. With the addition of moderate host Paula Faris on today’s episode, Pelosi was confronted with a few questions she didn’t like about her fractured party and the left stirring up strife. As to be expected, she dismissed each of these questions and instead of addressing them, went on nonsensical tangents blaming Republicans instead.

Liberal co-hosts Joy Behar and Sunny Hostin began with a few friendly questions, encouraging the longtime Democrat to bash President Trump on his response to Puerto Rico and John Kelly’s press briefing yesterday. On Kelly, Behar admitted she wish it had been used as an impeachment opportunity:

We were talking about General Kelly before. I think the reason he spoke was to contain the white house. There's no impeachment coming down the pike for those of us who would like to see him out of the office. [ Cheers and applause ] He has to live with it. We all have to live with this until the next election. Is that what he's doing or is there some other motivation?

Pelosi praised Kelly as a patriot before giving a lengthy defense of Congresswoman Wilson as someone who has done “great things.” Behar followed up by asking about Wilson’s recent admission that she felt like a “rockstar” with all the media attention: "What do you think that she called herself a rock star? The audience laughed. Is that appropriate? She goes from a serious angry mood as Meghan pointed out, to another state and it really didn't play that well I don't think."

Pelosi again defended the “kind, wonderful” Wilson, saying it was a badge of honor to earn the President’s ire:

Here’s the thing. Any time the current occupant -- the President of the United States attacks you you get such a positive reaction. That's probably what she was reacting to. Any time -- especially the current occupant of the White House. He's making attack on her and people know of her service and her leadership. She's a wonderful, kind person. Dealing with the White House's is heady stuff, it’s a big deal. You can just imagine if the president calls you a name, this president calls you a name, what the reaction is. [applause]

After that, Pelosi finally got a confrontational question from host Paula Faris. Faris characterized the fighting between liberals and conservatives as an “ongoing culture war” and confronted Pelosi’s part in causing divisions in America by name-calling anyone who disagrees with the left:

I think that's where a lot of people are frustrated. We're engaged in this ongoing cultural wars. Here we are talking about he said she said, we know after a fallen soldier died. We know that ISIS this week--I mean it’s usurping other big stories like ISIS is know hanging by a thread. We're not talking about really important stories. At the end of the day, I think the frustration--, you guys have such an opportunity as the Democratic party, but there’s frustration because if you oppose the Democratic party, you're labeled immediately as a racist, a bigot, a homophobe, a xenophobe and it really shuts down conversation. So as leader of the party how do you open up that conversation Nancy, without the name calling?

Pelosi immediately dismissed the obvious fact that there’s a culture war in America to begin with. She then blamed Republicans for cutting arts programs, saying “the arts” would be the healing unifier for “disagreements” between political ideologies:

Well, I don’t really subscribe to the fact that there’s a cultural war going on in our country. There are divisions. There are disagreements and the rest. I think there's plenty of opportunity to bring people together. One of the places -- I thank all of you for what you do. One of the places are the arts. The arts are a place where people come together. If it's music, if it's drama whatever it is. They laugh. They cry. They have empathy for each other. They forget differences. If you're talking about culture, take it to a place that says this is who we are as a people and while we have our political differences what we should be talking about is, what are their policies and what does it mean in the lives of the American people. I would like to take it to that place. Frankly the place where the Republicans are going now with their budget is a very bad place for our country.

After a commercial break, the hosts asked her about the dinner meeting she had with President Trump and Chuck Schumer. Pelosi lamented how she was not often given credit or listened to as a woman in Congress. But in that meeting, she did “give Trump credit” for listening to her.

Just like with Faris, Pelosi immediately dismissed the premise of the question:

"Let me with all due respect disagree with you. There is not a fracture in our party similar to what's happening to the Republican party," she said.

The audience then burst into loud cheers and applause, almost as if on cue.

“I think, with all due respect that's part of your problem,” McCain said as Pelosi talked over her.

PELOSI: It's always been a dynamic party. It’s not a rubber stamp. It’s a dynamic party.That's the vitality of it. You name one or two people that want we to step down and I can name you an overwhelming people in my caucus. Now, I was ready to go home, if Hillary had won, we’d have a woman at the top of the table, and protecting the Affordable Cat Act, which is for me, similar to Social Security, Medicaid, Medicare and the Affordable Care Act. [applause] I had an important role in passing that. I felt a responsibility to protect that. I’m here to do that. I feel very confident in what I'm doing and the support that I have. Please don't think it's anything like the fracture that is in the Republican party. [ Cheers and applause ]

MCCAIN: It hasn't stopped us from winning though. So President Trump is in the White House. There's a break down someplace.

PELOSI: This is our turn. This is the first time since 2006 when we won the Congress and I was the leader at the time. This is the first time the house, congressional, Chuck and I-- we are the ones communicating with the American people on this. We have a better deal, better jobs better pay better future for the American people. We feel comfortable with that. We have to get the message across. It's one thing to have a message. It's another thing to connect.

That was the last question Pelosi got before the interview concluded. Considering the amount of backlash liberals have shown McCain on social media, since she started on the show two weeks ago, McCain will either go squishy very soon or will be replaced with a more left-leaning "conservative."