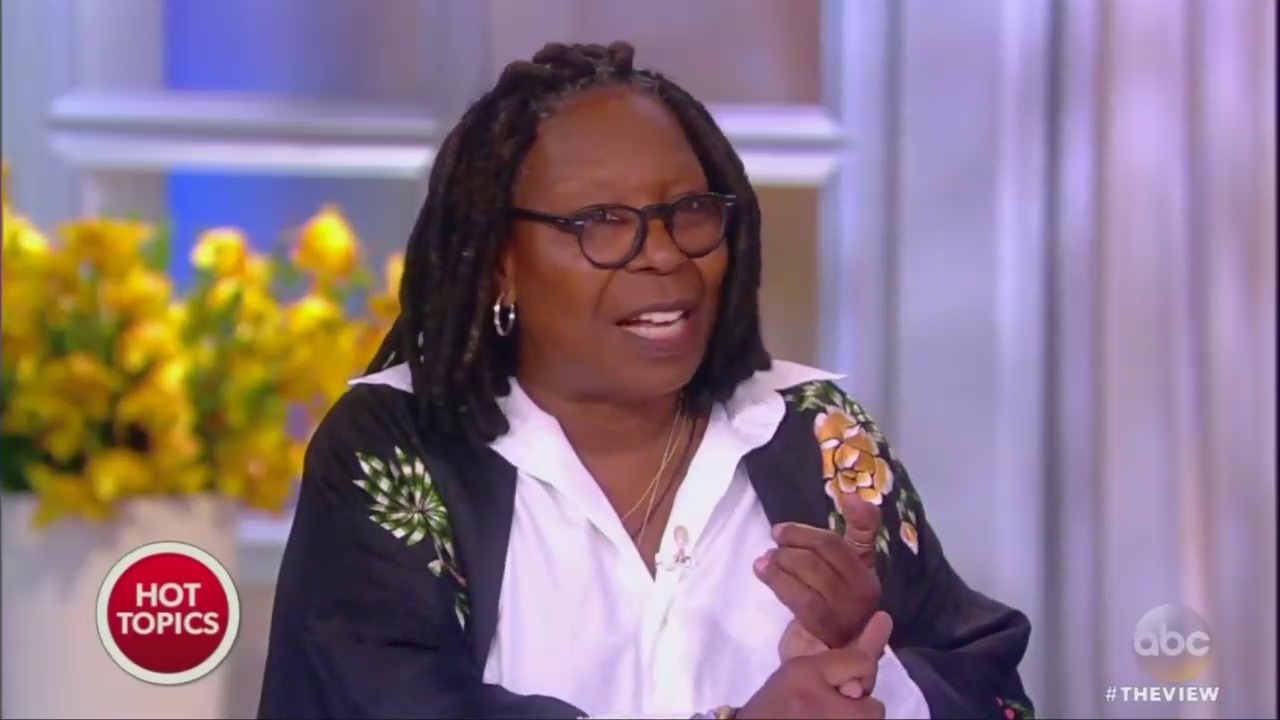 Wednesday on The View, the hosts praised “brave” rapper Eminem for his crass cuss-out of President Trump, and his followers, during last night’s BET Awards. Telling his fans who supported Trump, bluntly, “F**k you,” he proceeded to call the president a “b***ch,” a “racist grandpa,” and a host of other vulgar things in the lengthy freestyle rap.

Jedediah Bila replacement Meghan McCain was the only host to disagree that this rap was “brave.” Instead, she argued that it was more “socially acceptable” to be anti-Trump and liberal in Hollywood than it was to be a conservative.

After playing a short clip of the rap, Whoopi claimed that Eminem may “isolate” some of his fans with this demonstration. Joy Behar agreed:

“That's right. That's why you have to give him credit. Very few people in the industry will go out and say ‘I don't care if you don't support me. This is more important than my popularity.’ I have never seen it, frankly,” she praised, to audience applause.

I mean I was actually at the hair salon watching the B.E.T. Hip-Hop awards. The salon roared when that happened. It does take a lot of bravery I think to put your career on the line saying we should be talking about Puerto Rico, we should be talking about Las Vegas. We shouldn't have a Twitter fight with the Panthers. I just thought it was very brave. We have this discussion all the time where people with a platform should they use their platform to make these kinds of political statements? I think yes. [ cheers and applause ]

But newly minted host Meghan McCain, who has never been an outspoken social conservative, surprisingly stood against the rest of the panel, calling it “BS” to say that it’s “brave to call out the President”:

First of all, I call B.S. saying it's brave to call out the president. It's more brave to be a conservative in Hollywood. I know friends personally who have been blackballed for their political beliefs. I like Eminem and I always have. That being said, just one second and let me get your perspective: I Remember when Eminem went after President Bush went when I was younger and said ‘I don't rap for dead presidents. I would rather see the president dead.’ He was actually investigated by the Secret Service in 2003. I think for me, what’s so interesting is what helped breed Trump is when all Republicans are Nazis, and the worst and awful, sometimes if you cry wolf hard enough, sometimes the wolf will eventually show up in one form or another. I would be curious if Mike Pence were president would some of these people who have all these problems still have the same problems with him that they do with President Trump?

“We don't know, we don’t know,” Behar and Whoopi dismissed the statement.

“I will say this, you know, when people speak their mind as themselves it's a brave move because it's dangerous. People will take you out, yell at you, hit you, spit on you, kick you, all these things,” Whoopi claimed.

“Yeah but it is more socially acceptable to be a liberal in Hollywood, than it is to be a conservative,” McCain pushed back.

Whoopi disagreed profusely, resurrecting Hollywood history from over 60 years ago to make the point that somehow, Hollywood was still “very right-wing”:

It's not actually. Here's the thing Hollywood started out as a very right wing sort of area. That's why all this stuff with Dalton Trumbo happened because people were concerned about communists and all kinds of stuff. And we had the blacklist and all this kind of stuff.Then it made a shift and went to the left. So Hollywood fluctuates depending on who is in. When I say who is in I don't mean who is in office. It means who is in style. [ Cheers and applause ]

Sorry. Having spent a great deal of time there and knowing as much about Hollywood history, if you're curious as to how it has fluctuated in the last 50 years, all you have to do is pick up a couple of books on Amazon.

After commercial break, the discussion continued, with McCain and Whoopi sticking to their guns about anti-conservative bias in Hollywood.

“Wait a couple weeks,” Whoopi joked. McCain continued to make the point that it was more “socially acceptable” to be a liberal in Hollywood:

But I will say, all artists making a stand, all commentators making a stand, on this show, we all come out and make opinions that are controversial everyday. Every person on this panel knows what it feels like. Yes, it is brave. But I am saying that I think when you talk to people like Tim Allen, it is more socially acceptable to be an Obama supporter, to be a Hillary supporter, to be a Bernie supporter than it would be to be any conservative.

Whoopi jumped in to disagree, like she did often with Bila, to make the ludicrous and easily disproven claim that no one had lost their jobs in Hollywood due to their conservative politics:

“Except for all the conservatives are working. They’re the ones who have the jobs. Tim Allen has never stopped working,” she said, struggling to name any other conservative names currently working in Hollywood.

“Do you believe James Woods, that he’s retiring for his politics?” McCain posed.

Co-host Sara Haines, tried to be the equalizer in the conversation, as she often does, saying that “anyone” who’s popular will be ostracized if they take on an unpopular opinion.

Fellow co-host Sunny Hostin agreed saying,“I think DL Hughley said it best ‘when you give voice to the minority you run the risk of offending the majority.’ That happens all the time. That’s what’s going to happen to Eminem. It happens to me, it happens to all of us.”

McCain acknowledged the “very nice shoutout” the rapper gave to her father, Senator John McCain, before pressing her point again:

“But most conservatives get one person on a panel other than Fox News. There is an element of minority to being a conservative in mainstream anything. We may disagree on it--” she stated before Hostin interrupted.

“Trust me, I've been a minority my whole life. You’re not the only one that’s experienced that,” she snarked.

Whoopi again made her point that McCain was simply unaware of the “fluctuating” politics in Hollywood:

“You would be surprised to find out how much the fluctuation has gone on. I’ll give you some books,” she said to McCain.