ABC’s newest entertainer turned activist isn’t backing down, after intense criticism for his recent turns at blaming the right for people dying in a shooting massacre and overturning ObamaCare.

Jimmy Kimmel is now actively seeking out media coverage of his left-wing activism, outside of what he does on his late night comedy show. In a response to an artist-critic in Hollywood, (of all places,) Kimmel took a photo of himself giving the finger to the artist, with a message calling for support for the left-wing gun grabbing group Everytown for Gun Safety.

Kimmel sent the provocative photo to entertainment media outlet The Hollywood Reporter Thursday afternoon, as a retort to ads mocking Kimmel as a “cry baby.” Along with the photo, Kimmel told THR: "I encourage all fellow cry babies to support Everytown for Gun Safety — everytown.org." 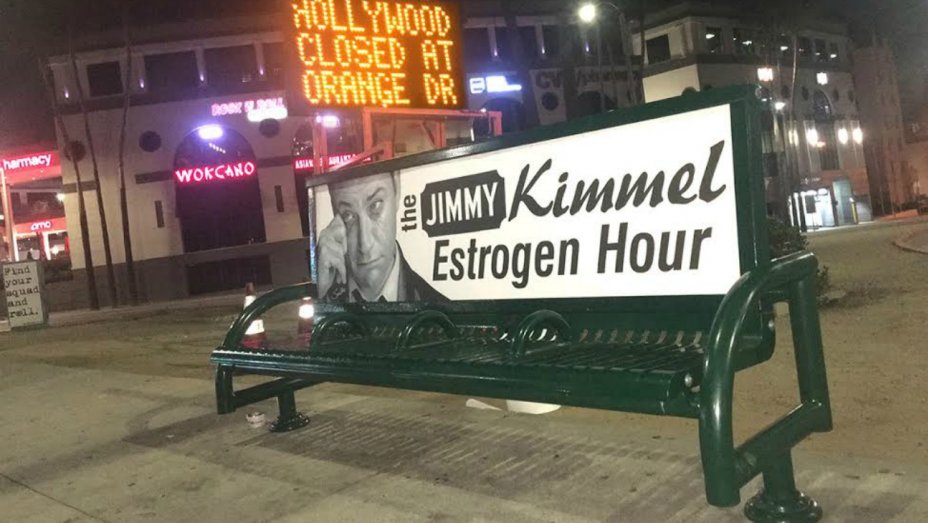 Kimmel’s response came after an artist named Sabo placed fake ads and posters of Kimmel Thursday morning on street benches across West Hollywood, in close proximity to Kimmel’s home and the ABC studios where Kimmel records his shows. The posters featured an image of Kimmel crying, made to look like Johnny Depp in the 1990 movie Cry-Baby, with the text, “The Jimmy Kimmel Estrogen Hour.”

Sabo told THR that the posters were to counter Kimmel’s gun control tirade, which he called partisan and factually inaccurate:

"Two facts are clear," Sabo said in response to Kimmel. "The first is that gun control laws accomplish nothing. Criminals don't abide by them. The second is that the left's aim in abolishing the Second Amendment is to have even more control over the people of this country."

"We allow Jimmy Kimmel into our homes because at one point we considered him to be entertaining," said Sabo. "Now he's nothing more than a talking head for the Democrat party."

JIMMY KIMMEL, IT'S NOT ME WHO QUESTIONS YOUR MASCULINITY, IT'S THE WAY YOU CROSS YOUR LEGS. :/ @jimmykimmel @JREpodcast @adamcarolla pic.twitter.com/6ay17lo0z0

According to THR, “Sabo has been chastising liberal Hollywood for years with his street art. His UnsavoryAgents.com website includes degrading images of Cher, Leonardo DiCaprio, Jon Stewart, Gwyneth Paltrow and more.”

Kimmel clearly is bothered by the criticism, after sending out that crass photo and using Wednesday’s show to mock his critics as “nuts” who were “responsible” for 58 people losing their lives to a lunatic.

Thursday evening, Kimmel also tweeted at his “crazy” critics with more virtue-signaling and calls for donations to Everytown:

Dear crazies: it is fascinating that 500 innocent people get shot and your anger is directed at me. Think about that https://t.co/TTMxEcjdbZ

Everytown, spearheaded by former New York City Mayor Michael Bloomberg, not only helps spread inaccurate information about gun violence, but the group actively works as a consultant for Hollywood, in figuring out ways to put more gun control messages in our entertainment.

It even has a celebrity “council” made up of several leading actors and filmmakers like Julianne Moore, J.J. Abrams, Judd Apatow and Jennifer Lawrence. Not only that, but the news media is also in collusion with the gun control group. From ESPN, to NBC, the media has dutifully promoted the group and it’s misleading “facts” for the past three years, since its founding.