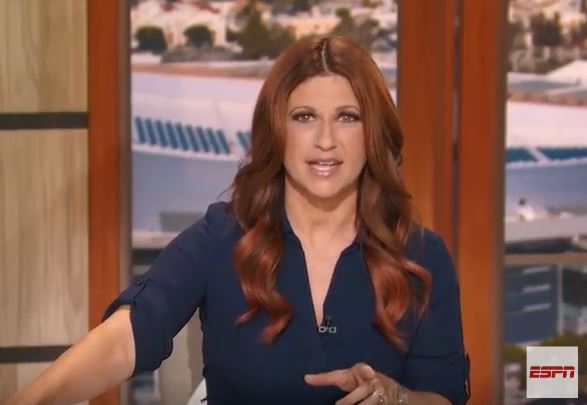 Without actually uttering the words "gun control," ESPN's Rachel Nichols used her NBA television program, "Jump," to appeal for donations to attack the National Rifle Association (NRA). In the aftermath of the Las Vegas massacre, she said we need to figure out how to end gun violence and she plugged a gun control advocacy group called "Everytown for Gun Safety."

Nichols tried to avoid the public backlash that surely would have come if she had mentioned the words "gun control," and she sidestepped her true intentions by mentioning that the NBA is partnering with Everytown. An internet search reveals the organization is merely a fundraiser for opponents of the NRA:

Chip in today to keep the pressure on lawmakers until they hear us and help us stop the NRA from gutting our gun laws.

We choose to honor the victims and survivors in Las Vegas by rejecting the NRA’s radical and dangerous agenda and demanding real action from our leaders to stop preventable gun violence.

In place of honestly and directly stating her purpose for addressing the Las Vegas massacre, Nichols portends to come across as a fair-minded neutral commentator merely calling for people to "work together." In the closing moments of the segment, though, she reveals her hand by promoting the NBA's work with an organization that lies about its mission and advocates for gun control:

Gun violence is unfortunately a subject that a lot of NBA stars are only too personally familiar with, which may be why this league's players have been the most outspoken looking for solutions. Do you remember this ad that ran during all the Christmas Day games when NBA stars appealed two years ago? Steff Curry, Carmelo Anthony, Joakim Noah, CP3 (Chris Paul) ... all joining the NBA and an organization called Everytown that promotes gun safety. We can end gun violence. Las Vegas is a sobering reminder that we haven't done that yet. But Steff's right. And we can. We owe it to the families mourning today to do the hard work of figuring it out.

That "hard work" is unmistably gun control. It means pushing groups like Everytown, which isn't the least bit interested in "gun safety." It's intent -- and that of Nichols and the NBA -- is all about preventing honest Americans from practicing their constitutional right of self defense.

Mass murder is not about the guns, stupid, it's about people with depraved hearts. Whether it's mentally deranged people like Stephen Paddock and Jared Loughner or radical Islamic terrorists guided by hate.