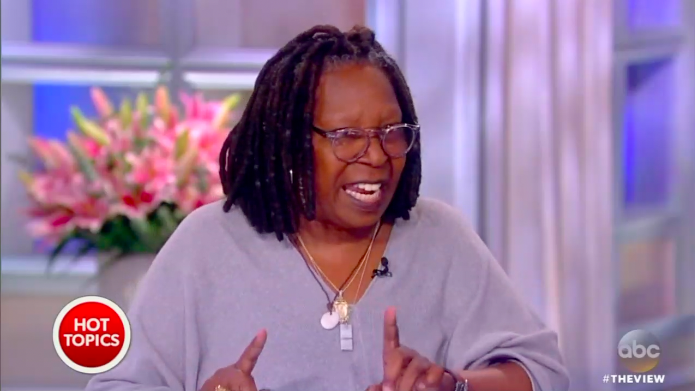 Monday on ABC’s The View, the hosts continued their network’s obsessive coverage and hysterical handling of the NFL protests this weekend, that were in response to President Trump’s condemnation of the league allowing them to happen in the first place. The ladies at The View took a hard left position on the protests, as to be expected, praising Colin Kaepernick as “very American,” and bashing Trump as “scary” “crazy” and the “bum-in-chief.”

Co-host Sunny Hostin even argued that it was “illegal” for Trump to state he’d like to see NFL team owners fire players for protesting on the field.

To lead into their discussion, host Whoopi Goldberg noted that at a recent charity benefit over the weekend, singer Stevie Wonder kneeled in support of the NFL protesters.“He took two knees for America!” Whoopi gushed, as host Sunny Hostin exclaimed, “Yes he did!” to thunderous applause from the audience. That brought the panel onto the actual protest and what Trump said that spurred it.

With an eye roll, Whoopi began:

“So over the weekend,” she started, “the bum in chief,” (at which the fellow hosts and audience burst out in cheers and laughter), “decided he was going to make some noise at the NBA and then also at the NFL and then he sort of went crazy and was in Alabama saying wild stuff,” she said before rolling the tape of Trump’s comments: “Wouldn't you love to see one of these NFL owners when somebody disrespects our flag to say ‘Get that son of a [ bleep ] off the field right now. Out. He's fired. He's fired!’”

“That's scary. That part. When he goes ‘He’s fired.’ That rage in him!” host Joy Behar exclaimed with alarm.

Whoopi went on to argue that the protests are all about race, and Trump doesn’t get it:

He also tweeted this morning ‘The issue of kneeling has nothing to do with race. It's about respect for our country flag and national anthem.’ I says it is about race and it is about respecting people and I will -- [ cheers and applause ]

I will just give a little perspective of why. You know, folks fought in world War I and World War II, came back to America. People of color -- talking specifically people of color came back to America and couldn't vote. A lot of people didn't get the vote in the United States until 1968. [Whoopi meant to cite the Voting Rights Act of 1965, though black men were granted the right to vote in 1870, but because of cases of discrimination, the 1965 act was passed to add further protection from voter intimidation and suppression.]

Now when you see some of the things we've seen over the last years of young black men and black women being sort of man handled not just by police, but by lots of different folks. When you see the kind of anger there is at black people and you know some of those folks have fought in Iraq and have five or six tours of duties and they come back and they are disrespected, I say you have to pay attention when somebody is saying I need you to respect all of us, not just some of us, but all of us. America allows us to protest that way. He's not blocking traffic, he is not hurting anybody, he’s not screaming, he’s down on one knee. [ Cheers and applause ]

Hostin agreed, before erroneously claiming an employer couldn’t fire an employee over their freedom of speech because that was “illegal.” For someone who is a lawyer and ABC’s legal news analyst, it’s a little embarrassing that Hostin doesn’t know that the Constitution protects individuals from the government infringing on their First Amendment rights, not an employer, or privately owned businesses like the NFL:

“What's shocking to me -- of course he's advocating the firing of an employee for exercising his or her Constitutional rights, which is illegal,” Hostin stated.

“You cannot fire someone for exercising their Constitutional rights. It's illegal. To hear him say that was appalling,” Hostin repeated.

She continued to defend Kaepernick, saying the anthem didn’t represent African-Americans so it wasn’t about him not respecting the flag:

The anthem protest is not about disrespect to the flag, or disrespect to the military or our country. Our anthem says liberty and justice for all. What Colin Kaepernick was doing was take a knee to highlight the gap between the promises of that anthem and the lived experience of African Americans in this community. That's what it's about. Nothing more.

Behar jumped in to point out that Trump himself wasn’t “patriotic” because he forgot to put his hand on his heart a “couple times.” Did Behar forget that President Obama also was not consistent with putting his hand over his heart during the National Anthem, yet it was sacrilegious to the left to suggest anything about his patriotism?

“Couple things I would say. Number one I remember a scene where Trump forgot to put his hand on his heart. A couple of times his wife had to remind him and she's from Slovenia. ‘So let's not go talk about patriotic behavior, that’s one thing.’ The other thing this is all about besides being a racist--" she began.

“Say what it really is about,” Whoopi urged.

Behar then went on a Hillary-esque rant, about all the reasons why Trump shouldn’t be in office:

I'll get to that. The first thing I want to say is the way he talked about neo-Nazis with such glee ‘oh they're lovely people, they’re kind people’--and these people, ‘they're sons of whatever he said.’ I can't say that. Only the president can say that. It's the rules of ABC, but not the presidency apparently. So there’s that. Of course Mueller's investigation is getting so close. 21 states were hacked into by the Russians. We were cyber attacked in 21 states. That's one of the main reasons Hillary lost the election. He doesn't like that. His ego doesn’t like that. It means he didn’t really win legitimately. Plus, Mueller is really really starting to breathe down his neck. It’s getting real close to the oval office and he's scared.

“That's what he does. He ran his campaign on racial resentment and fear. His politics is one of division. 55% of Americans including 29% of Republicans believe he has divided this country more than he united the country,” Hostin added before cutting to commercial.

After commercial break, the discussion continued, with host Sara Haines saying that while she initially didn’t feel comfortable with Colin Kaepernick kneeling during the anthem, she understood that she had to “walk in someone else’s shoes” to understand their perspective of the flag:

“When I did that, it made me prouder to say I will forever stand up and hold my hand on my heart. To know Colin Kaepernick can kneel next to me is what we're all fighting for,” Haines gushed to applause from the audience.