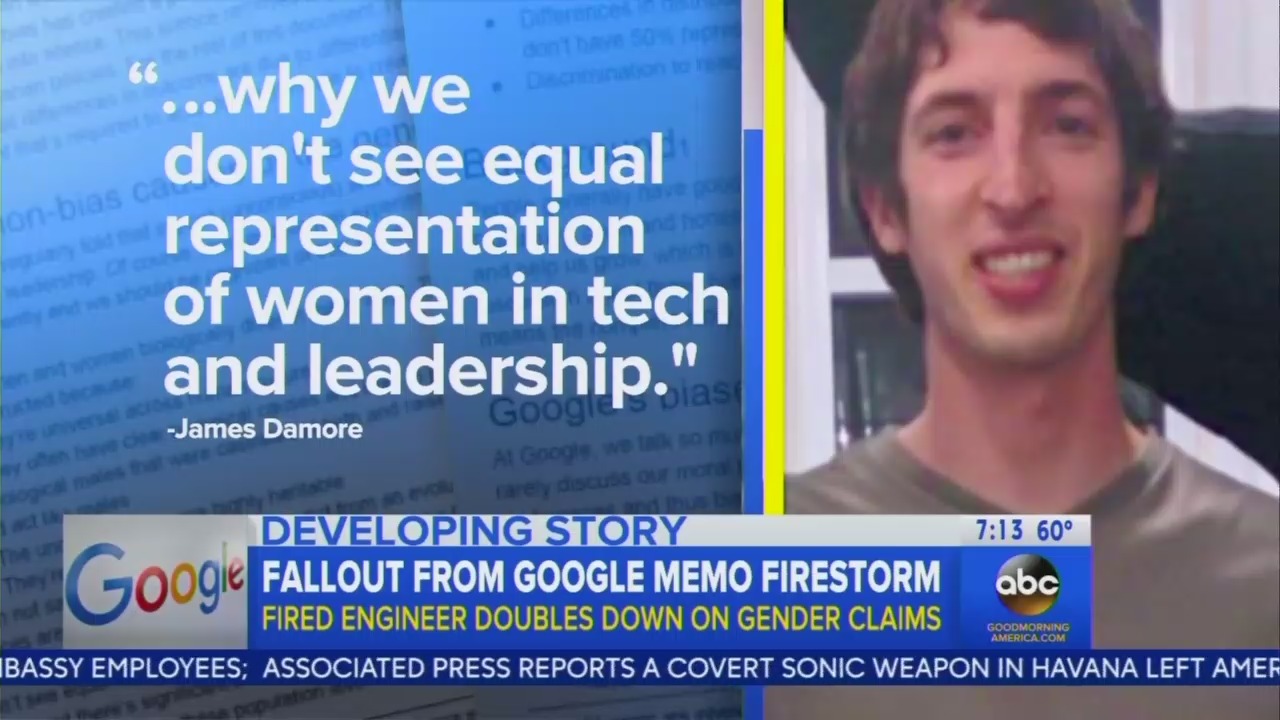 Thursday on Good Morning America, ABC journalists continued their skewed reporting on the leaked memo from a former Google engineer that criticized his company’s approach to diversity in the workplace. But today’s report from ABC was the most biased yet. Correspondent Rebecca Jarvis cherry-picked the most unflattering generalizations about women from James Damore’s ten page memo, completely ignoring these were only a tiny portion of the memo, which had much more positive things to say about women brought to the workplace. In addition, the former Google engineer’s numerous criticisms of the company’s lack of tolerance for political viewpoints that weren’t from the far-left, was completely ignored in ABC’s report.

Jarvis report started the same way most of the media’s hyperbolic reports have:

This morning the man behind the memo that sparked outrage doubling down on those controversial claims about gender diversity at Google speaking out in an interview on YouTube.

Jarvis then highlighted comments from the memo, which gave a completely skewed perspective of what the memo actually entailed. ABC chose to include only the most unflattering generalizations about women from the memo, while omitting the numerous positive statements about women, and disregarding the equally as unflattering generalizations about men in the document. Instead, Jarvis only highlighted the following comments:

....claiming women on average have more neuroticism and higher anxiety, lower stress tolerance than men, and those differences may explain why we don't see equal representation of women in tech and leadership.

ABC continued harping on how the memo was “harmful to women” by including a sob story from Youtube’s female CEO, who complained “how hard it was” to explain the memo to her daughter: “I thought about how tragic it was that this unfounded bias was now being exposed to a new generation,” Jarvis read.

Another part of the document ABC didn’t cover was Damore’s criticism of Google’s left-wing bias. His memo repeatedly criticized Google for silencing voices that went against their left-wing “ideological echo chamber,” but still ABC had the audacity to claim the memo was “anti-diversity.”

During their first report on the subject on August 8, it wasn’t much better. Correspondent Nick Watt cherry-picked the same lines from the memo that Jarvis did, again completely omitting the counterparts to these statements and what the purpose of the memo was to begin with.

But at least on Tuesday’s report, ABC included one line about Damore accusing Google of liberal bias.

NICK WATT: Good morning, Robin. Well, Google’s CEO reportedly rushing back from vacation to handle the fallout from this ten-page memo that was written by a male engineer. It includes lines like “women, on average, have more neuroticism” and “abilities of men and women differ in part due to biological causes and that these differences may explain why we don’t see equal representation of women in tech and leadership.” He also accuses Google of a left-wing bias.

ABC is just one of many media outlets completely misrepresenting what Damore wrote. Like ABC, the Washington Post and CNN falsely summed up the memo as saying women couldn’t succeed in tech because of “their biology.” Left-wing outlets like Slate even went as far to call Damore a “white supremacist” while the Atlantic characterized the engineer’s memo as an unhinged tirade from a crazy person.