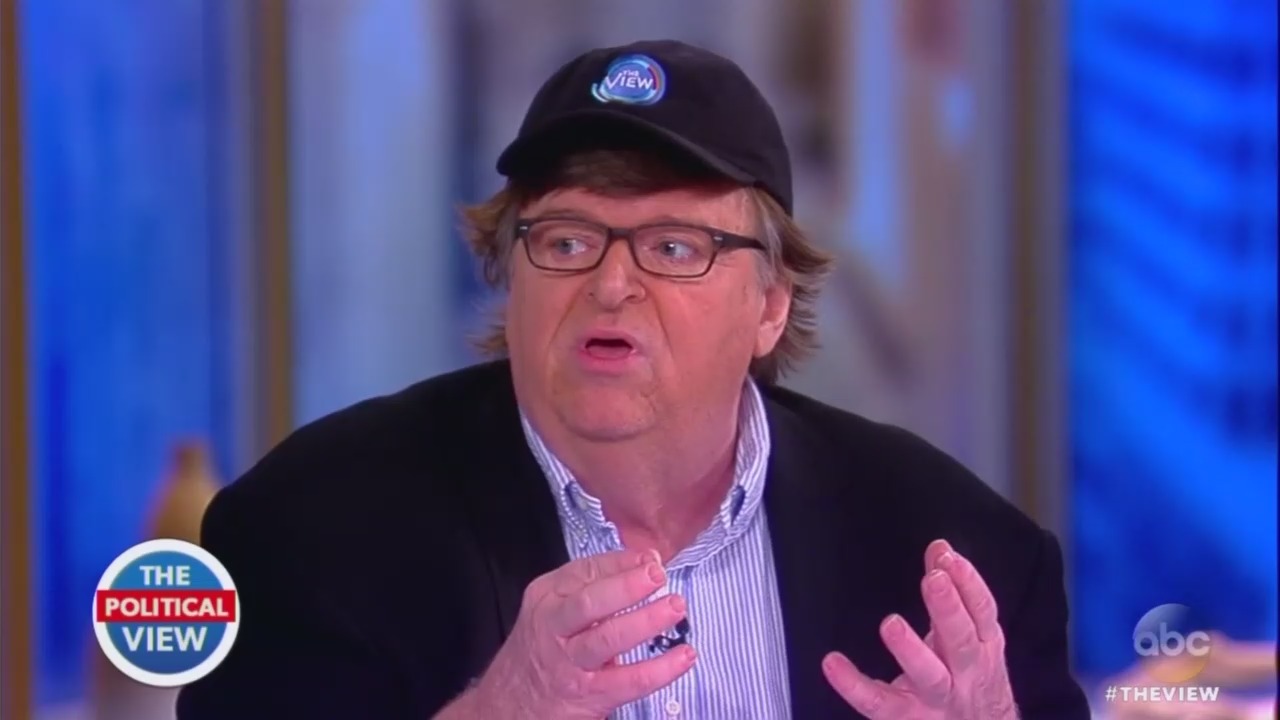 After bashing Trump adviser Stephen Miller as a racist for defending immigration reform, then bashing the state of Missouri for their recently passed “racist” law that protects businesses from unfounded lawsuits, the View crew had still more ill-informed hot takes to give on Thursday’s show. Equally as loony liberal activist Michael Moore was today’s guest, and he fit right in with most of the panel’s hatred for the right and for Trump.

The discussion with Moore began with Behar remarking that Moore had accurately predicted Trump would win the election, in Summer of 2016.

Moore surprisingly didn’t blame Russia or Comey for Clinton losing, but blamed her advisers for taking her away from campaigning in states like Michigan and Wisconsin.

“We tried to get the Clinton campaign to spend more time in Michigan and Wisconsin and I said on the show he was going to win Wisconsin, Michigan, Ohio and Pennsylvania. Not that I wanted but I'm trying to warn people,” Moore stated.

But Moore quickly reverted back to the Democratic standby, that the electoral college was to blame, and it needed to be abolished.

After ranting about that for a while with Behar, host Sunny Hostin asked Moore what he thought the strategy should be for the next election. Moore had two ideas: Don’t cater to Republicans, and come up with a celebrity candidate.

“First of all, don't go to the right. You don't need to convince Trump voters. We already have the majority. Let's get the majority in these electoral college states,” he said. He then suggested Democrats need a movie star or television personality as their candidate in 2020.

But host Jedediah Bila pushed back on him for that, saying that Trump’s lack of political experience is something the left always harps on about.

On that note, you talked about celebrities and you have suggested that perhaps on the left they should run some big name celebrities. My question for you is though if they do that those celebrities once they get in office, they have to govern, they have to lead. Have we not seen that experience, whether it's serious business experience or serious governmental experience, experience matters. Do you still feel the same way now that you have seen Trump?

“Yes because the celebrities on our side, first of all, are smart!” Moore gushed without hesitation. “If we ran---”

“Who wouldn't vote for Tom Hanks for president of the United States? C'mon. Or Oprah, Oprah!” Moore gushed as the audience loudly cheered.

“I'll tell you who. Many Americans feel that those celebrities are out of touch. I'll tell you a lot of people would say they don't understand my needs,” Bila shot back. As she was finishing her point, Moore scoffed, saying people “loved” celebrities, such as himself:

Whoopi then started arguing with Bila:

“It's very true that America loves celebrities because that's why they voted for him. They thought they knew him. They believed that was his office. Listen, I talk to as many of these voters as you have. They believed he was actually in his office doing - my face fell off!” Whoopi scoffed.

“But as a businessman they looked at him, even his television show, he looked like that savvy businessman,“ Bila said. “Look, hey, I want you to run celebrities. I'm a conservative. I don't want them to win, I don’t want Democrats to win,” Bila joked.